Turkey starts to re-admit migrants from EU under readmission agreement 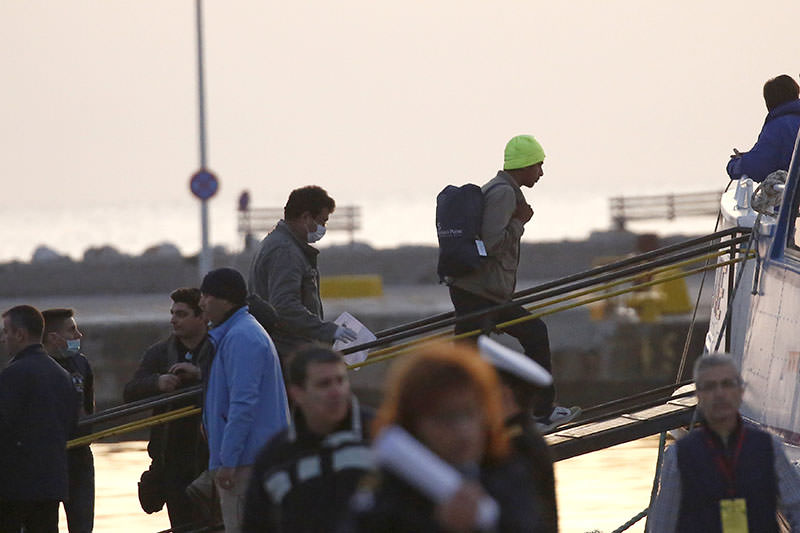 Migrants board a Turkish-flagged passenger boat to be returned to Turkey, on the Greek island of Lesbos, April 4, 2016. (Reuters)
by Daily Sabah with Agencies Apr 04, 2016 12:00 am

Turkey started to re-admit migrants from the Greek island of Lesbos on Monday under a landmark European Union deal aimed at stopping the influx of migrants and refugees into Europe since last year.

Under the EU-Turkey deal, Ankara will take back all migrants and refugees, including Syrians, who enter Greece illegally in return for the EU taking in thousands of Syrian refugees directly from Turkey.

The European Commission on Monday said Turkey's had met the legal requirements for taking back migrants sent from Greece. Asked about whether Turkey had met all the requirements for the first boats of migrants arriving on Monday to be "legally sound", a spokeman for the EU executive said: "Yes."

Two Turkish-flagged passenger boats carrying 131 migrants set sail from Lesbos to the Turkish town of Dikili as the sun rose over the Aegean Sea early on Monday.

The first ferry named Nazlı Jale docked in Dikili at 9:20am (0620 GMT) with several dozen passengers on board.

Each migrant was accompanied by a plainclothes Frontex officer. They had been transported in a nighttime operation from the Lesbos island's holding centre to the port. Greek riot police squads also boarded the boats.

The returnees were primarily from Pakistan and some from Bangladesh and they had not applied for asylum, said Ewa Moncure, a spokeswoman for EU border agency Frontex.

Asked if Syrians would be returned, she said: "At some point, but I don't know when."

Moncure said there were plans to return migrants from the nearby island of Chios as well but did not say when.

Turkish Interior Minister Efkan Ala has said Turkey was ready to receive 500 people Monday and that Greek authorities had provided 400 names, although these numbers could change.

"The readmission agreement will start from April 4," Ala said on Saturday, adding that only those who left Turkey after March 20 will be eligible to be admitted. "I mean, not those who had left before [March 20]," he further added.

"Those who are from countries other than Syria, [namely] Afghanistan, Pakistan, Iraq, will be transferred to refoulement centers from the minute we admit them from Greek islands," Ala said.

After migrants are transferred to these centers, Turkish authorities will contact their respective countries, and they will be returned to their country of origin in line with readmission agreements signed with the aforementioned countries, he explained.

The first wave of returned migrants will arrive in the resort of Dikili, just opposite Lesbos. Tents have been put up by the town's harbourside in anticipation of Monday's arrivals, according to media reports.

Mustafa Toprak, governor of Turkey's western Izmir region, said the migrants would only be staying briefly in Dikili and the resort of Çesme -- a second reception point -- before being moved on.

The operation to resettle Syrians to Europe under the one-for-one arrangement also starts Monday.

The first Syrian refugees arrived in Germany from Istanbul on Monday under the EU-Turkey migrant pact, an official from the German federal refugee office told Agence France-Presse (AFP).

The 16 asylum seekers flew into the northern city of Hanover and were to be taken to a shelter about 140 kilometers away. A second group of Syrians was to arrive in Hanover in the early afternoon, the official added. Along with Germany, Turkish media reported that Syrian migrants will be also settled in Finland and Netherlands.

The representative from the Federal Office for Migration and Refugees, Corinna Wicher, asked reporters to respect the privacy of the asylum seekers, who were members of three families. An AFP reporter saw five children among them.

"This is all very new, very difficult," Wicher said. "They have been traveling for a very long time." Wicher said the new arrivals would spend two weeks at the temporary shelter in the town of Friedland for orientation, including lessons in basic German and logistical practicalities, before being placed in housing around the state of Lower Saxony.

Under the scheme agreed to with the EU last month, one Syrian refugee will be settled in Europe legally in return for every Syrian migrant taken back by Turkey from EU member Greece, which has faced the largest influx in recent months.

Early Monday, Greece sent back a first wave of migrants to Turkey under the deal that has run into strong criticism from rights groups. Germany last year let in a record 1.1 million migrants and refugees but Chancellor Angela Merkel has come under intense pressure to stem the flow.

Merkel spoke by telephone with Prime Minister Ahmet Davutoğlu early Monday to discuss the start of returns and "agreed that the pact must be implemented successfully," her spokesman Steffen Seibert said.

Berlin has agreed to accept 1,600 people under the current program and expects other EU member states to begin taking in refugees under the pact with Turkey from Monday, an Interior Ministry spokesman said.

Germany has already seen a sharp drop in arrivals in recent weeks after Balkan countries closed their borders to migrants and refugees.

The daily Bild reported Monday that more than half of the places available at reception centers, generally the first port of call for new asylum seekers, are now unfilled after months of overcrowding.

Among more than 348,000 places in shelters across the country, only about 157,000 are currently occupied, the newspaper reported after polling officials in Germany's 16 federal states.

The reception centers offer basic services to new arrivals before they are placed in more permanent housing.