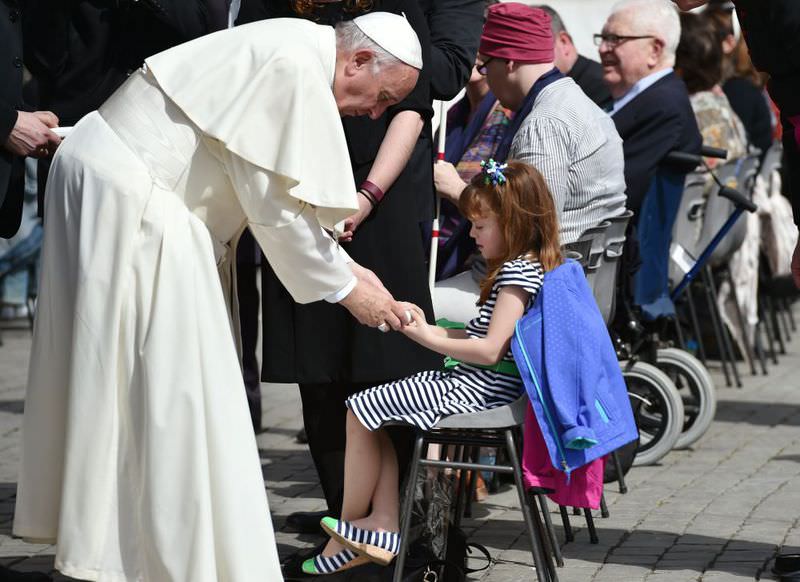 by Daily Sabah Apr 07, 2016 12:00 am
An item on the bucket list of Elizabeth "Lizzy" Myers, a 5-year-old girl from Ohio, came true after Turkish Airlines sponsored her trip to the Vatican to meet Pope Francis. Myers suffers from Usher's Syndrome, a rare genetic disease, and will gradually lose her sight and hearing, though she has not been informed about her disease.

Her parents had prepared a bucket list for her that includes the things and people she should see and meet while she can still see. When the story of the girl suffering from Usher's Syndrome was publicized, Tuncay Emiroğlu, a Turkish Airlines official working in Chicago, was touched by her story. Emiroğlu decided to help the family and Turkey's flag carrier offered free tickets for the girl and her family to go anywhere in the world. The devoutly Catholic family chose Rome and was in the audience of St. Peter's Square in Vatican City on Wednesday.

They were given special seats among the large crowd. Francis approached the young girl, touched her eyes gently and blessed her. "She was awestruck, she just teared up," her mother Christine Myers told reporters after the meeting, adding that pope was "the big guy in the white hat" for the young girl. She said Francis asked them to pray for him and he would pray for them.
RELATED TOPICS