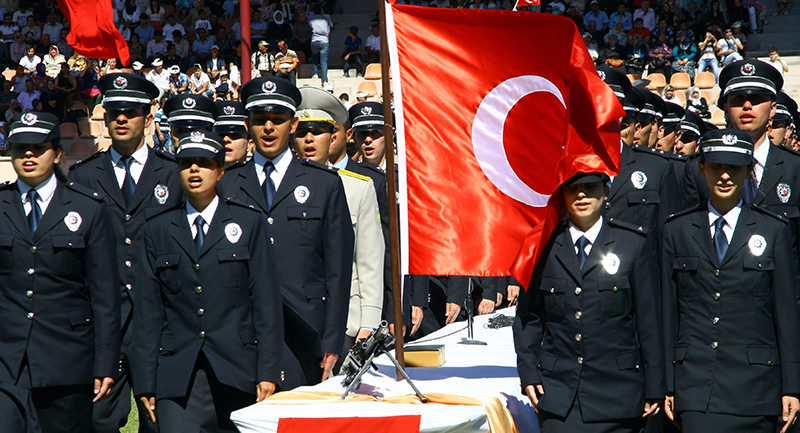 For nearly two decades, Turkey's police have been sharing their expertise with police forces as they train young recruits for a career tackling crime.

Recruits from police forces as far away as Mongolia or as close as Bosnia have been coming to the Ankara police academy in Gölbaşı, to the south of the capital, for training in fields such as riot control, leadership and administration alongside Turkish cadets.

They are then returned to their home countries to put their new skills into practice.

Fatmir Hajdarevic, 41, was one of the first to attend the five-year course in 1998.

At the time, Fatmir's home town Sarajevo was still recovering from the horror of Bosnia's ethnic war. He told Anadolu Agency how he came to Turkey to "benefit his country".

"Quality education always has a positive impact," he said. "I got that quality education. During the academy, besides the related courses, we also had courses in various areas such as law."

On his return, Fatmir was posted to the research department at Sarajevo police headquarters before taking part in a UN mission to Liberia and then being appointed special operations commander.

"I never cut my ties with Turkey," he said. "If I could have a second chance, I would again go to Turkey and attend the academy without a second thought. I attended some training about intelligence and crime scene investigation over the past couple of years and passed on what I learned in Turkey to my colleagues in Bosnia."

For Fatmir, the comradeship of his training in Turkey will remain with him for the rest of his life.

"Wealth is not money or gold, it is the friendship," he said. "There were people from many countries during my period. Now I have friends wherever I go."

Bosnians were some of the first to receive police training in Turkey but now cadets from Albania, Turkmenistan, Mongolia, Palestine, Azerbaijan, Uzbekistan, Kazakhstan, Kosovo, Tajikistan, Turkmenistan, Macedonia and Tunisia have passed through the academy's gates.

Slobodanka Ristic, 33, who attended the academy between 2004 and 2009, is today training Sarajevo's future police officers.

She was 21 when she went to the Gölbaşı academy and described a tough life. "There was strict discipline in the academy," she said. "It was difficult but I was happy because it was rewarding for me."

Ristic first worked in the narcotics branch of Bosnia's police but for the last two years has been a deputy commissioner teaching at the Sarajevo police academy.