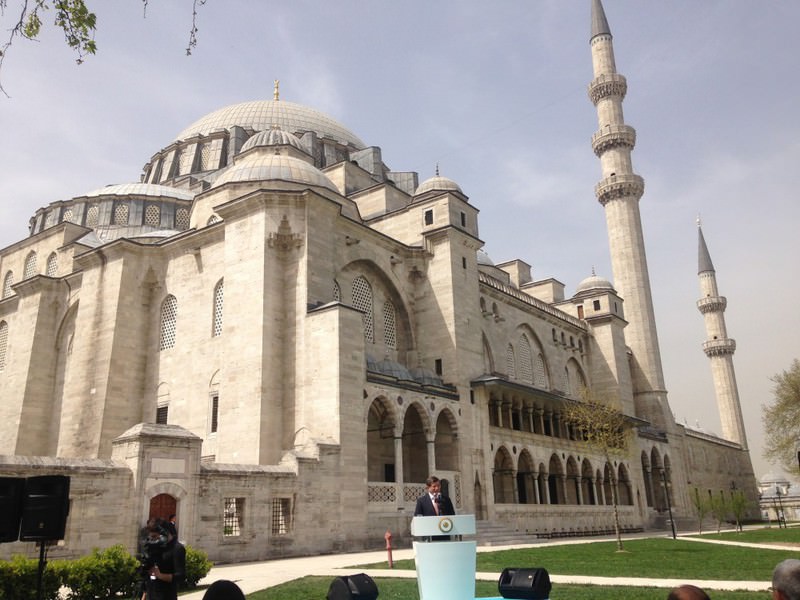 Prime Minister Ahmet Davutoğlu, speaking on Saturday during his visit to a ceremony held at Istanbul's Süleymaniye Mosque, said he will initiate an investigation into the missing skull of Mimar Sinan, the famed Ottoman architect who was the brains behind many of the empire's most celebrated buildings across Turkey, the Middle East and the Balkans.

Chief architect for 49 years under Süleyman the Magnificent, Selim II, and Murat III, Sinan lived from 1489 to 1588. Recognized as an architectural genius, he was buried in a tomb he designed near the Süleymaniye Mosque. His skull was removed by a group of historians from the Turkish History Research Council in 1935 for study. However, during a restoration process, officials found that it was not put back in place.

Davutoğlu said he had ordered an investigation into the matter to find the skull and put an end to what he described as an insult to the great architect's memory. "If such a barbarous act happened in this land, there is no way we can approach his tomb and pay our respects. We will utilize all our tools, including DNA analysis, to find and return the skull to put an end to this blight to his memory."

He said that the skull was removed at a time when racist beliefs were dominant around the world and that the skull was removed to take its measurements to assess the brain capacity of a man who had produced so many amazing buildings. "They tried to justify something or other by measuring his skull. They insulted Sinan's memory by removing it from the rest of his body. There are many stories about where the skull is located. … He amalgamated an entire civilization and left it to us, and we couldn't even protect his body," Davutoğlu added.

Betrayal of the city

The prime minister also swore that authorities would ensure there will be no buildings constructed that damage Istanbul's silhouette.

He also cited Sinan's architectural vision of ensuring buildings remained in harmony with nature. He said: "Nothing in his buildings would violate the order and beauty of nature. It rather complemented it."

He said the current generation had to ensure Istanbul's beauty could be preserved intact so that it could be passed to the next generation. "However, when nearing Istanbul by ship, you see Süleymaniye and a monstrosity called Gökkafes side by side. One becomes upset by people who never learned Architect Sinan's lessons." He described buildings that tainted Istanbul's silhouette as a betrayal of the city, adding, "If we had truly learned Sinan's lessons, we would have never erected buildings that harmed the city's nature and historical fiber." He said everyone is responsible for harming Istanbul. "Our order to architects, municipalities, all local governments and especially the environment minister is to ensure no single building that harms the city's harmony will be allowed."
RELATED TOPICS