Number of Syrians in Turkey stands at 2.7 million with gradual rise 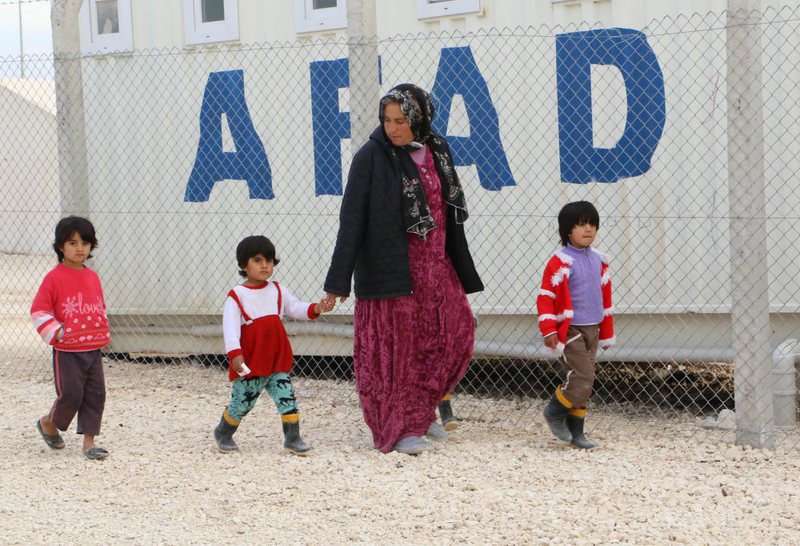 A woman and three children walk past a Disaster and Emergency Management Authority (AFAD) container in the city of u015eanlu0131urfa, which hosts the largest number of Syrian refugees in Turkey and the world.
by Daily Sabah with AA Apr 12, 2016 12:00 am

Turkey is hosting 2.7 million Syrians, or, according to the latest figures from the Interior Ministry, 2,749,140 to be exact, and the number of refugees showed a slight rise this year while there seems to be no end in sight to the ongoing civil war in Syria to Turkey's south

The General Directorate of Migration of the Interior Ministry released the latest figures regarding Syrian refugees, millions of whom fled to Turkey since the war in Turkey's southern neighbor broke out five years ago. Turkey currently hosts 2,749,140 refugees from Syria, with 145,000 arriving in the first three months of 2016.

These numbers will continue to swell, as the number of refugees in Turkey from Syria was only 14,237 in 2012. With the rise of new actors in the bloody Syrian conflict, including DAESH, which is terrorizing the northern regions of Syria close to the Turkish border, as well as Russia's active military role in support of the Assad regime, may displace more people, experts predict. The possibility to reach Europe in pursuit of a better life attracts more Syrians to Turkey, embattled with the highest number of refugees in the Middle East.

Interior Ministry figures show only 270,380 refugees are staying in the refugee camps set up by Turkey in border cities, while others either live on their own in rental houses or old buildings in which they squat, as well as makeshift tents. Wealthier Syrians opt for starting up businesses catering to their community while those from impoverished families hope to scrape out a living, as the government introduced temporary work permits for refugees earlier this year. The majority of refugees are men and more than 1.3 million refugees are below the age of 19, raising concerns that a so-called "lost generation of Syrians" will face a bleak future.

Naturally, most refugees live in the Turkish cities near to the border with Syria. Şanlıurfa tops the list of cities with Syrian residents with 401,068 refugees, but is closely followed by Istanbul, hundreds of kilometers away from the border has 394,556 refugees. The country's most populated city is already a major attraction for internal migrants as well. Other big cities far from the border are also drawing refugees seeking jobs or at least a place to stay. Bursa, a city south of Istanbul, hosts more than 96,000 refugees, while İzmir hosts 90,607 Syrians, according to the latest figures. Smaller cities such as Tunceli in the east and Sinop in northern Turkey host less than 100 Syrian refugees each.

The number of Syrians surpassed the 2 million mark last year for the first time, increasing to 2,503,549, and the latest number - over 2.7 million - was recorded as of March 31. The number may further increase although Turkey has seen less displaced Syrians amassed at border crossings recently, as clashes between DAESH and rebels, as well as clashes between rebels and Syrian regime forces, have blocked migration routes towards the border.

Turkey has built 26 "temporary accommodation centers" for refugees in 10 cities near the border. Those centers are either tent camps, or housing units resembling shipping containers, offering basic services such as clinics to migrants, along with schools for young refugees and lifelong learning classes for adults. Şanlıurfa, again, tops the list of most refugees staying in camps with 109,936, followed by border province Gaziantep with 40,732 refugees in camps.

Though Turkey rightly boasts of hosting the largest number of refugees from Syria and is praised by the international community for the quality of their refugee camps, Ankara complains of a lack of international help with sharing the burden. Ankara has repeatedly called for establishing "safe zones" within Syria for internally displaced people, and a transition period in the war-torn country, without regime leader Bashar Assad, to end the conflict and therefore the refugee flow to Turkey and other countries. Turkey recently signed a deal with the European Union to reduce the flow of refugees from Syria to the continent, as more migrants were seeking illegal means to travel to Europe. Under the new deal which is still underway, Europe will resettle newly-arrived migrants from Greece to Turkey, in return for which the EU will take in Syrian refugees from Turkey.
RELATED TOPICS