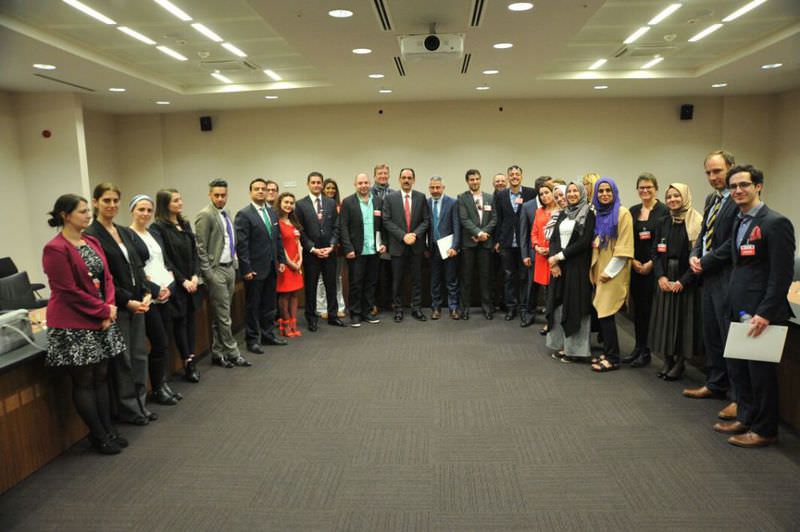 The Daily Sabah Centre for Policy Studies hosted its first-ever Journalism Academy this week, giving an opportunity to foreign journalists interested in Turkey to get first-hand insight into the country

The Journalism Academy by Daily Sabah's think tank extension The Daily Sabah Centre for Policy Studies, took journalists from around the world to various places, from the corridors of power in Ankara to refugee camps near the Syrian border.

The four-day program hosted a diverse group of reporters who specialize in Turkish and Middle Eastern politics. Through a series of roundtable discussions and field trips, the journalists interacted and engaged with Turkish academics, researchers and policymakers and got the opportunity to develop their own perspectives on Turkey.

The program began in Istanbul on April 9 with a welcome dinner and reception at Khedive Palace where participants mingled and got to know each other. Opening remarks were given by both Daily Sabah Editor-in-Chief Serdar Karagöz and the director of the DS Policy Centre, Pınar Kandemir.

Regional and national politics were opened to discussion during three separate sessions held at the roundtable meetings that took place on April 10 at the Foundation for Political Economic and Social Research (SETA).

The first session discussed the political and economic environment in Turkey's post-election era, with a number of distinguished guest speakers participating, including the Institute of Strategic Thinking (SDE) Director General Birol Akgün, Professor Ali Murat Yel from Marmara University and Sadık Ünay, an expert on political economy at SETA. This session gave a brief overview of the political and social divides in Turkey, the June and November elections and Turkey's position in the global economy.

The second session then moved on to discuss the Syrian civil war and its global and regional implications. Some well-known and respected international relations professors and analysts spoke at the session, including Professor Nurşin Ateşoğlu Güney, Professor Gülnur Aybet and Turkish Radio and Television Corporation (TRT) Managing Editor Resul Serdar Ataş. During this session, speakers commented on the roles of regional and global powers in Syria, the gaps in U.S. foreign policy and NATO's hesitance to get involved in the conflict.

In the third session, the refugee crisis was discussed in more detail. Professor İbrahim Kaya of Istanbul University's Faculty of Law talked about the legal status of Syrian refugees in Turkey while Enes Bayrakli, a researcher at SETA, commented on the recent EU-Turkey migrant deal. They were joined by Euronews's Istanbul correspondent, Bora Bayraktar, who spoke about what he learned from visiting refugee camps in Europe and Turkey. In particular, the third session shed light on some of the key differences between the European and Turkish experiences in managing the influx of Syrian refugees.

The second day of the program took place in Ankara on April 11 with a discussion with Turkish officials on counterterrorism and the foreign fighter phenomenon. Given the recent Ankara, Istanbul and Brussels attacks, many of the Western journalists who attended the program were interested in learning about Turkey's counterterrorism policies and its experience in dealing with threats emanating from different groups like the PKK, Democratic Union Party (PYD) and DAESH.

A trip to Parliament concluded the program along with a discussion on Turkish media at the Prime Ministry's Directorate General of Press and Information with its deputy manager, İsmail Mansur Özdemir.

With a following trip to the Presidential Palace and roundtable discussion with presidential spokesman İbrahim Kalın, many of the program's participants got the chance to ask about Turkey's regional and international policies.

On the third day of the program, participants visited the Nizip refugee camp in Gaziantep where they observed the living conditions of Syrian refugees in Turkey.

Speaking after the visit, program participant Yaman Zeitouni from The Huffington Post Arabi said: "I learned about the efforts and organizations of the AFAD [Disaster and Emergency Management Authority] and the Turkish government. You hear a lot about it, but it's different when you see it. ... I felt bad when I saw the refugees but was proud of what the Turkish government was doing." Sarah Jones from TRT World said she liked the facilities for refugees and said children at the camp seemed pleased with getting a bilingual education in Turkish and Arabic.

While Sadaf Syed, a photo journalist for Al Jazeera America, said that the program gave her an opportunity to share their (the refugees') story and cover the human side of the crisis. "I was able to connect heart to heart, human to human," she said.

With a dinner hosted by the Mayor of Gaziantep, Fatma Şahin, foreign journalists got the opportunity to discuss the long term plans of the state for the Syrian refugees, as well as addressing their questions to the Mayor.

The education and employment of Syrians were at the center of discussion. Mayor Şahin highlighted that the schooling rate has increased to 70 percent, while the essential regulations for the legal employment are fairly and effectively implemented and enforced.

The program ended with an Istanbul city tour, Whirling Dervishes Show and closing remarks at dinner held on April 13.