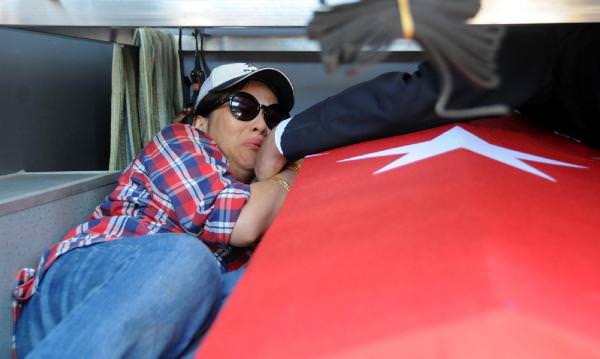 by Daily Sabah Apr 16, 2016 12:00 am
Prime Minister Ahmet Davutoğlu granted on Friday Turkish citizenship for a Vietnamese woman, who is the wife of a Turkish police officer killed in a PKK ambush in Diyarbakır province, which will also allow her to receive a monthly salary.

Davutoğlu instructed officials to start the citizenship process of Vu Thuy Tuong Vi Le, wife of deceased police officer Tansu Aydın, after he was informed that Vi Le was not able to receive salary paid to the families of "martyrs" because she was not a Turkish national when her husband was killed on duty.

Aydın, who was a traffic police, was killed by PKK militants after he was lured into an ambush with a fake traffic accident report in August, 2015.

According to Turkish law, a foreign national who has been married to a Turkish citizen for three years and is still married to that partner may apply for naturalization. However, Vi Le was only married to Aydın for two months when he was killed, making her unsuitable for salary.

The PKK terrorist group, also listed as a terror organization by the United States and the EU, resumed its 30-year armed campaign against the Turkish state last July.

Since then, over 350 members of the security forces and thousands of PKK terrorists have been killed in operations across Turkey and northern Iraq.
Last Update: Apr 16, 2016 10:30 pm
RELATED TOPICS