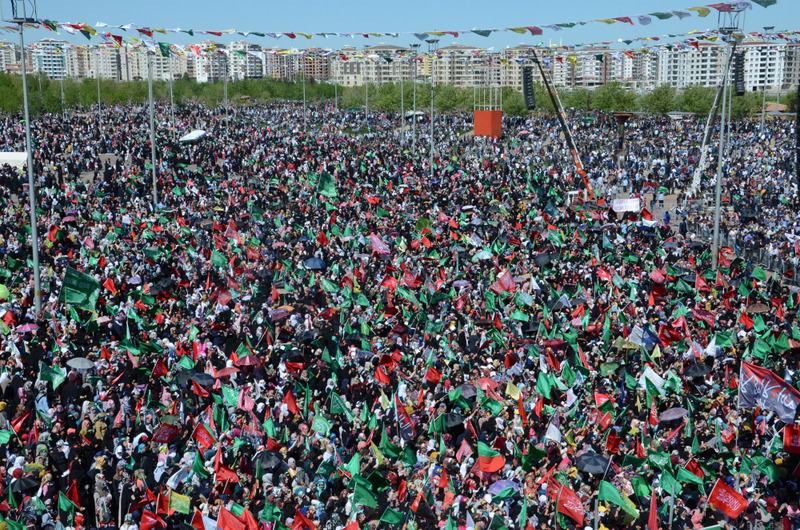 Turkey's state-run Presidency of Religious Affairs (DİB) and several nongovernmental organizations mark the birthday of Prophet Muhammad with "Sacred Birth Week." Celebrations began with a major rally in the southeast and an event in the northwestern city of Edirne, with believers from the Balkan countries. Though the precise year and date of the prophet's birthday are unknown, since 2007 Turkey has celebrated the week between April 14 and April 20 as Sacred Birth Week, with events dwelling upon the life of the prophet and Islamic themes. The theme for this year is "Prophet, Belief in the Divine Unity of the Almighty." A rally in Diyarbakır was a prominent display of Muslim unity, as hundreds of thousands of people converged in a central park.

Organized by the Admirers of the Prophet Platform, a body of Islamic nonprofit organizations, the rally was held under tight security measures in a city where daily life has been crippled by terror attacks for months. Starting from the early hours of Sunday, a crowd streamed into a park in the Bağlar district, carrying banners with hadith (sayings of prophet). Police set up three checkpoints in the park and participants were searched thoroughly, given security concerns. Giant screens were erected in the park for a live broadcast of the stage, with events ranging from speeches on the life of the prophet and hymns in Kurdish and Turkish dedicated to the prophet, as well as recitation of verses from the Quran.

Nimetullah Kaya came from Batman, a city some 100 kilometers from Diyarbakır, to attend the rally. Batman hosted an event to mark Sacred Birth Week, but few people showed up for the event as it was organized by the Peoples' Democratic Party (HDP), an opposition group linked to the PKK terrorist organization, known for its attacks on mosques in the southeast. "Love of the prophet brought me here. It is a great love we bear in our hearts. I thank everyone who helped [organize this event] so that our enthusiasm for the prophet remains," Kaya told Anadolu Agency.

In the northwestern city of Edirne which borders Bulgaria and Greece, DİB President Mehmet Görmez led morning prayers at the Ottoman-era Selimiye Mosque, for Muslims coming from the Balkan countries to mark the week. Hundreds from Bulgarian and Greek towns with large Muslim and Turkish populations flocked to the mosque for the prayers. Addressing the congregation, Görmez recalled how past years had seen the persecution of Muslims in the Balkans, and how the Muslim community in Bulgaria "yearned to see the minarets of Selimiye," an iconic mosque which remains a major attraction for Balkan Muslims. He said Divine Unity ("tawhid") was one thing that united Muslims beyond borders. "There is no God but Allah and Muhammed is his prophet. This is what unites us. We thank God for allowing Muslims to retain this one sentence which we all believe," he said.
RELATED TOPICS