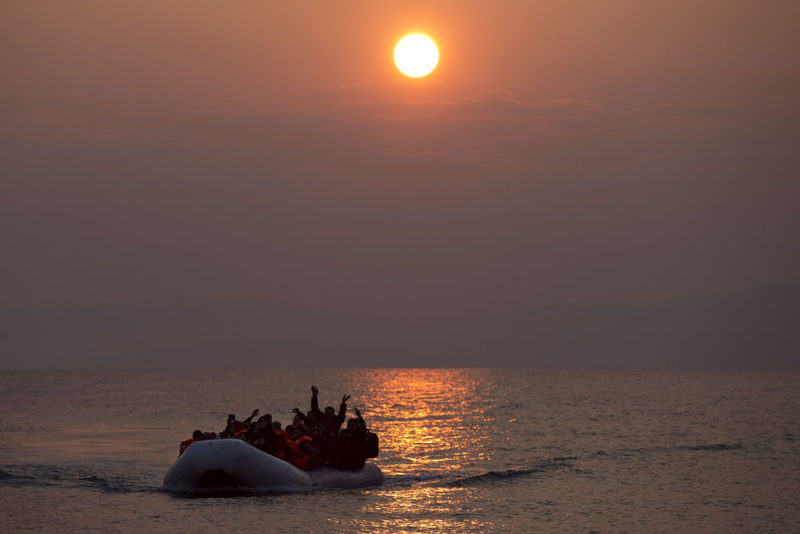 by Daily Sabah Apr 19, 2016 12:00 am
Once a hub of deadly boat trips to the Greek islands from Turkey, the Aegean Sea coast has grown quiet recently as crossings by migrants from Syria and other countries dwindled following an EU-Turkey resettlement deal, with no deaths reported this month.

The coast, which was used to be crowded with migrants awaiting the next boat for illegal crossings into Greece, is largely empty nowadays after a deal between the European Union and Turkey for the resettlement of illegal immigrants in Europe back to Turkey in exchange for the controlled admission of refugees from Turkey.

The coast, stretching more than 2,800 kilometers from Çanakkale in the north to Muğla in the south, is a lively expanse for tourists with sunny weather nearly year-round. However, migrants have long been a common sight in secluded areas of beaches where tourists flock, especially after the conflict in Syria intensified. Syrian, Afghan and Iraqi migrants, as well as many others from Asian and Middle Eastern countries, have turned the coast into a popular crossing point to the islands of Greece, a gateway to Europe just a few kilometers from the Turkish coast.

Latest figures from the Coast Guard show that the EU-Turkey deal is actually working. Statistics show that the number of migrants intercepted at sea was only 156 on the weekend and the total number of migrants stopped by the Coast Guard in April was 1,190, a substantial decline compared to more than 8,100 people intercepted in March, the month the EU-Turkey deal came into force.

Facing a flow of refugees and migrants from around the world fleeing conflicts and poverty unprecedented since World War II, the EU turned to Turkey for help earlier this year. Ankara responded by approving a deal for the resettlement of refugees and a heightened clampdown on migrant smugglers, further relieving Europe of the burden of illegal immigrants. Under the deal, each refugee crossing into Europe after March 20 will be relocated to Turkey and European countries will take one refugee living in Turkey in return. Dozens of Pakistani and Afghan refugees were returned to Turkey earlier this month as part of the deal while flights took Syrian refugees to European countries including Germany, Finland and the Netherlands.

Concerning the humanitarian dimension of the agreement, curbing the flow of migrants is contributing to something more important: preventing deaths. No migrant deaths were reported in the Aegean Sea this month according to statistics published on the Coast Guard website. A total of 32 migrants drowned in the Aegean Sea in March. Although the Aegean route is a shortcut to Europe for migrants compared to the land route, it is also probably the deadliest. Migrants are often forced to travel in shoddy, overcrowded boats and rafts with cheap life vests that are unable to keep them afloat if their boats sink. Strong winds on the Aegean Sea common in winter months add to the dangers of the journey.

A powerful image of a 2-year-old Syrian boy named Aylan Kurdi whose lifeless body washed ashore on a Turkish beach last year triggered widespread grief concerning the refugee crisis, giving rise to pressure on European countries to do more for refugees, including accepting more of them. Yet it took months and hundreds more deaths before European Union member states set aside their differences concerning which countries should take in more refugees and to seal a deal with Turkey. Fewer migrants are heading to Europe now, and they are traveling safely, with flights arranged by countries for a limited number of migrants in line with the deal.

Still, it seems that it will take more time for a complete end to the flow of refugees as Syria, currently the main source of refugees as millions have been displaced in the war-torn country, is still embroiled in the conflict, exacerbated by the rise of the DAESH terrorist organization. In the early hours yesterday, some 45 refugees from Afghanistan, Iraq and Syria were stopped by the Coast Guard off the coast of Çeşme in the province of İzmir as they were headed to Chios aboard a rubber boat. On the Greek side of the coast, 18 Syrian migrants were saved from certain death by the Greek Coast Guard when their boat capsized one mile from Farmakonissi island.

Ankara has taken a humanitarian approach with an open-door policy for refugees from Syria since the conflict broke out, providing accommodation for 268,097 refugees in modern refugee camps. The country has also spent $10 billion for its Syrian "guests," the official name for refugees granted temporary stays. But with no end in sight to the civil war, Syrians will likely stay longer than expected and many will seek asylum in Europe, particularly in Germany, which is known for its generous social benefits.
RELATED TOPICS