Thousands of Turks, people from other nations march in Washington D.C. to 'let history decide' 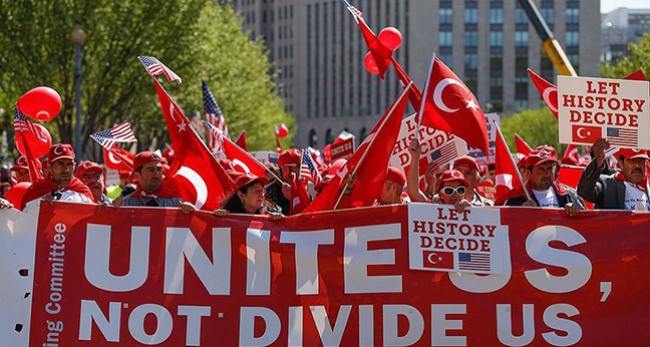 Thousands of Turkish Americans and people from other nations marched on April 24 to say 'stop' to the defamation campaign against Turkey regarding the 1915 events and call for peace and solidarity with Turkey, in a counter-protest against Armenians.

Thousands of Turks, people from other nations march in Washington D.C. to #LetHistoryDecide https://t.co/rwLm3UtLC1 pic.twitter.com/tWvVCGjn7c

The march was organized by the Turkish-American National Steering Committee (TASC) and took place in Washington D.C.

"Officially we had more than 11,000 attendees," the Steering Committee said on its Twitter account Sunday. The walk, which included different ethnicities and religions, started from the White House and continued until the Turkish embassy in Washington.

Thousands of peoples from around the world also tweeted the hashtag #letHistoryDecide.

''We are now waiting for the great march organized by the Turkish-American National Steering Committee,'' the Ambassador of Turkey to the United States Serdar Kılıç had said on his Twitter account before the march.

İbrahim Uyar, who is one of the founders of TASC, reportedly said that they put up ads supporting Turkey on subways, buses and billboards in Washington, New York and Texas.

Meanwhile, TASC has also launched a social media campaign with the hashtag #LetHistoryDecide, to raise awareness about Armenian propaganda regarding the 1915 events.