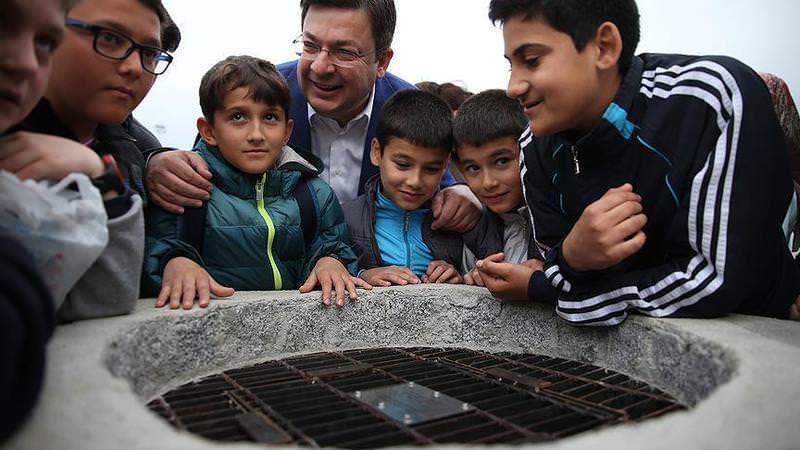 The people of Çanakkale can now talk to New Zealanders and Australians through a virtual sound well opened on Turkey's Aegean coast Saturday.

Each of the three wells collect audio and transmit it clear enough for people to hold conversations from one location to another, as if via virtual holes through the earth.

Speaking at the opening ceremony for the four-foot (1.2 meter) high stone well in Çanakkale on Saturday, Giddy said: "I do not think that there is an art piece like this. I believe this is unique."

A Facebook statement says that the wells symbolize, facilitate, and are expected to become an integral part of the evolving story of ANZAC-Turkish relations -- "a connection between the people of these three nations that has developed out of the adversity which originally brought them together," it adds.

"With these three wells, the friendship of three countries will revive," Giddy said Saturday, Turkish National Sovereignty and Children's Day.

Auburn is home to Australia's largest Turkish community, while Wellington is the home to a sizeable Turkish diaspora and a towering memorial to Mustafa Kemal Atatürk, the founder of the Republic of Turkey.

"What I think and what I hope the countries will do here is come together the way that they know that they want to and the way that world show through this wells people will be able to communicate," added the artist.

​Çanakkale is the closest city to where the Gallipoli landings of World War I took place -- a defining moment in the early nationhood of Australia and New Zealand, who lost many soldiers on Turkish soil.

"Three countries Australia, New Zealand and Turkey know that through the words of Atatürk we manage to form a relationship after conflict. What I like to think is that the world can do such a thing. We need to think about the words of Atatürk and what it means to people in conflict around the world," he added.

A Memorandum of Understanding (MOU) was also signed Saturday between Wellington and Çanakkale joining them as sister cities.

Last year marked the 100th anniversary of the Gallipoli campaign, known as the battle of Çanakkale in Turkey.