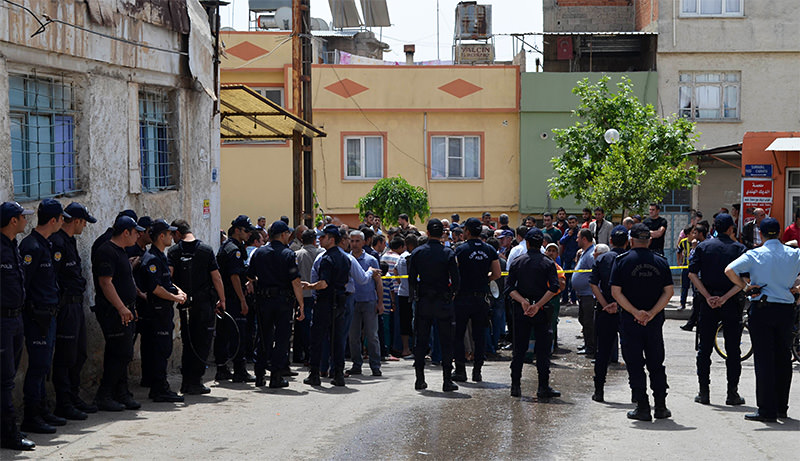 Two civilians were killed and 10 others were injured as a rocket fired from northern Syria fell near a historic mosque located in southeastern Kilis city center around 6:00 p.m. local time on Sunday.

The 16th century mosque is located some 100 meters away from Kilis Governorate, where Deputy PM Yalçın Akdoğan, Kilis Governor Süleyman Tapsız, Mayor Hasan Kara and Deputy Mustafa Hilmi Dülger were having a meeting when the rocket landed. Following the meeting, Akdoğan announced the casualty toll of the latest attack. Initially one Turkish woman, 36-year-old Fatma Demir, was killed and ten others were wounded in the attack. 23-year-old Syrian national Fadıl Emin later passed away at the hospital.

Tensions were already high in the city as two rockets that were fired from Syria hit the roof of a house and an empty field, injuring 16 civilians earlier on Sunday.

A statement released by the Kilis Governorate said that 10 Turkish and six Syrian nationals were injured as rockets fell to Kilis city center around 10:30 a.m. None of the injured remain in critical conditions, the statement added. After the incident, police and emergency units were dispatched to the area and the injured civilians were rushed to the nearby hospital.

Some people marched to the governorate building after morning's explosions to protest.

Three people, including a 14-year-old boy, were killed on Friday when five rockets were fired to Kilis from the Daesh controlled al-Bab town in northern Syria, bringing total deaths from stray rockets and artillery shells to 15, including five Syrian nationals. Dozens were also wounded in the attacks.

Occasional stray rockets and mortars land in southern and southeastern Turkey due to the conflict in neighboring Syria.

Kilis, which is home to large numbers of Syrian refugees exceeding its own population, has suffered repeatedly from cross-border shelling. Akdoğan said that since January, 45 rockets fell in Kilis. The rockets became an almost daily occasion in the small town where locals recently rallied for more security measures.