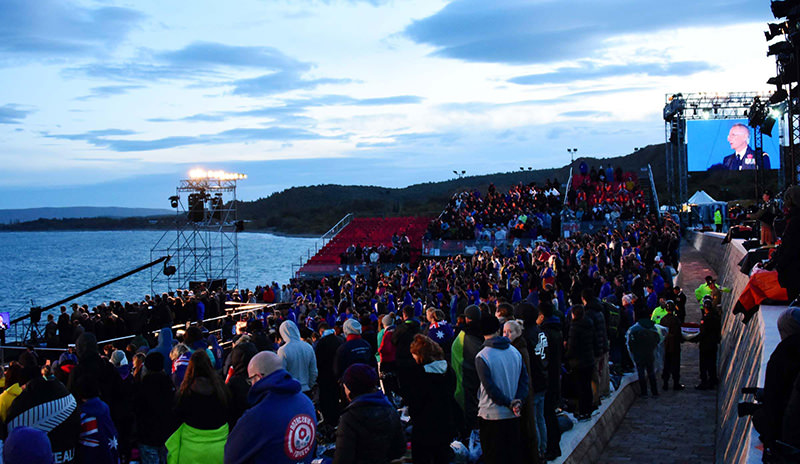 The western city of Çanakkale hosted Australians and New Zealanders yesterday, who came to remember ancestors who were killed in the Gallipoli campaign of World War I, while Turks across the country marched to commemorate fallen Ottoman soldiers who died defending their country

The descendants of the combatants on each side of the Gallipoli battle, etched into the annals of World War I, marked the 101st anniversary with somber services. Australians and New Zealanders flocked to Anzac Cove – named after the Imperial army from Australia, New Zealand and Canada – for dawn services early on Monday in memory of hundreds of victims who perished in the Gallipoli landing, eight months into World War I. A few kilometers away, on a hill overlooking the cove, thousands of Turkish citizens accompanied by a government minister held a memorial service to honor the Ottoman Empire's 57th Infantry Regiment, which staved off the Gallipoli landing, despite suffering the loss of nearly 3,000 soldiers. They took part in nationwide marches to commemorate the soldiers of the regiment that took orders directly from Mustafa Kemal, the commander of a division of the Ottoman Army during the war, who later went on to found Republic of Turkey as Mustafa Kemal Atatürk.

Australians and New Zealanders camped out at the Anzac Cove on Sunday night for the service which started at 5 a.m., the exact time of the landing. Documentaries about the Gallipoli campaign were shown to visitors throughout the night. A Maori woman performed a traditional powhiri welcoming dance for visitors before the dawn service. Visitors prayed for Anzac soldiers and hymns were recited in memory of soldiers. The ceremony was attended by Australian Veterans' Affairs Minister Dan Tehan, New Zealand's Defense Minister Gerry Brownlee, soldiers from Australia and New Zealand, as well as local Turkish officials.

Brownlee thanked Turkey for hosting the event. "We are here to honor our family members who came here to serve us," he said. He quoted the words of Atatürk in his address to the families of Anzac soldiers: "You mothers, who sent their sons to faraway countries, wipe away your tears; your sons are now lying at our bosom and are in peace. After having lost their lives on this land, they have become our sons as well." Atatürk's words were inscribed at a memorial for the late Turkish leader in the Australian capital Canberra.

Tehan underlined the sacrifices made by the soldiers during World War I, remembering Lt. Duncan Chapman, believed to be one of the first Anzac soldiers to step ashore in Gallipoli. Chapman, from Queensland's Maryborough, survived the campaign and wrote, in a letter which Tehan quoted, that he was honored to be the first man to set foot ashore, adding, "What a living hell it was too, and how I managed to go through it from four o'clock in the morning of Sunday April 25th to Wednesday the 28th, under fire the whole time, without being hit, is a mystery to me."

April 25 is known as Anzac Day in Australia – a significant national holiday that honors the Australian and New Zealand Army Corps (ANZAC) who fought and died in Çanakkale.

This year marks the 101st anniversary of the battle, key to the Allied forces strategy to reach Istanbul through the Dardanelles (Çanakkale) Strait. The Ottoman Empire sided with the Austro-Hungarian Empire (modern-day Germany) in the war, and succumbed to defeat in the end with a post-war diplomacy, forcing it to humiliating surrender in the face of the Allies' overwhelming force. The Gallipoli campaign, which lasted for months before the final Allied troops left in January 1916, remains a bright spot in the last decade of the Ottoman Empire, whose territories shrunk to present-day Turkey from a superpower which spans the world.

Minister of Youth and Sports Akif Çağatay Kılıç represented the Turkish government during a ceremony in Çanakkale dedicated to the 57th Infantry Regiment. The regiment's efforts fueled post-war patriotism in Turkey, and became famous with Mustafa Kemal Atatürk's orders to troops: "I do not order you to attack. I order you to die." After the Gallipoli campaign ended and the Ottomans succumbed to defeat, several factions composed of volunteers and Ottoman officers joined forces under the command of Atatürk and fought in Turkish War of Independence.

Speaking in front of a monument erected at the Gallipoli battlefield, Kılıç said they were gathered "to understand what soldiers martyred here felt while defending their country." Before the ceremony, the crowd had their breakfast with the same meager rations, soup and just a few crumbs of bread – which ill-fitted soldiers were forced to eat during the battle. "We understand, albeit slightly, the mindset of these soldiers, who were only children of this country when Mustafa Kemal ordered them to die." Kılıç said the battle was a showcase of unity for the nation, as teenagers, students, veteran soldiers and volunteers from all walks of life came together to defend their country.