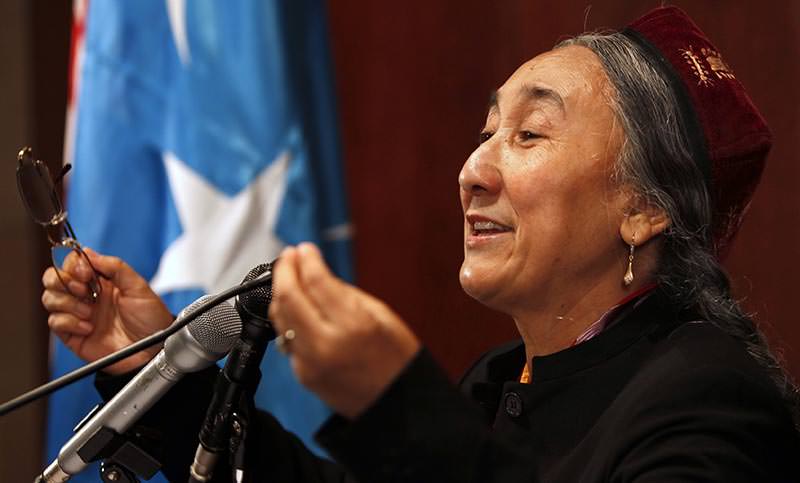 A leader of World Uighur Congress said Turkey has been taking care of Uighur people, "just like it did to Syrian refugees".

Speaking to Anadolu Agency during an exclusive interview, Rebiya Kadeer, the Chairman of World Uighur Congress, said "dictators and radical groups in the Middle East" forces people to flee to the west, including Turkey and Europe.

"Turkey has sheltered Uighur people, who fled from Chinese oppression, just like they took care of millions of refugees who fled from Syria," Kadeer said.

Kadeer thanked Turkey and said "People of Turkey shared it's bread with Uighur people, with the people of East Turkestan. Turkey's and it's people's sincerity and kindness to those who are in trouble gave us hope and made us happy."

Prominent Uighur leader mentioned that during their meeting in Berlin, the World Uighur Congress aimed to loud Uighur people's process of migration from Xinjiang Uyghur Autonomous Region to the international community.

"There are around 1,500 Uighur people in Kayseri right now," Kadeer said. "We are thankful for the people of Kayseri for showing their brotherhood to the migrants."

Kadeer -- one of the most prominent Uighur dissident leaders -- also said that the Chinese government has been trying to "demonstrate Uighur people as terrorists", who migrated "just to fulfill their religious duties".

"There has been a constant perception management by China and this is a state terror," she added.

Many Turks refer to China's Xinjiang Uyghur Autonomous Region - the home to many ethnic minority groups, including the Turkic Uighur people - as East Turkestan.

In June 2015, it was widely reported that China has banned Ramadan in parts of Xinjiang Uyghur Autonomous Region for Party members, civil servants, students and teachers.

In 2014, the government issued warnings to employees and students not to fast during the holy month.

In January 2015, the ban was extended to wearing burqas in public places. Uighur, a Turkic group that makes up around 45 percent of the population of Xinjiang, has accused China of carrying out repressive policies that restrain their religious, commercial and cultural activities.