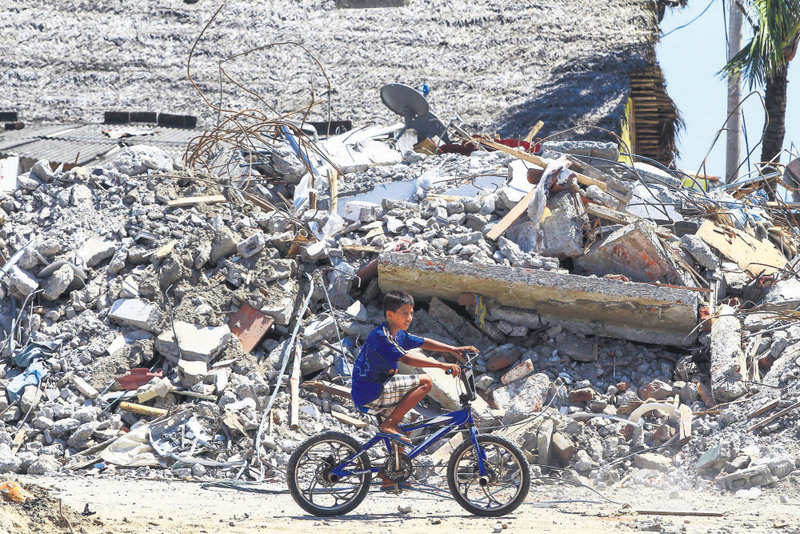 A boy passes by the debris of a building in Canoa, Ecuador. The country experienced its worst earthquake in decades on April 16.
by Daily Sabah Apr 27, 2016 12:00 am

The state-run Disaster and Emergency Management Authority, which is known for reaching out to disaster victims across the world, pledged more than TL 1 million in humanitarian assistance to Ecuador where an earthquake killed hundreds and left thousands homeless

Turkey, which was one of the first countries to offer help to South American country Ecuador after a large earthquake on April 16, pledged more than TL 1 million ($353,000) in aid to the country in the disaster's aftermath.

Officials from the Prime Ministry's Disaster and Emergency Management Authority (AFAD) are engaging in talks with Ecuadorian officials on how to help the country. AFAD had already planned to send 1,500 food packages, 1,500 hygiene kits, 150 mobile lavatories and hygiene units. Ecuador requested aid especially in supplying lavatories and hygiene kits for those affected by the earthquake, according to officials. Along with hygiene kits, Turkey will send food packages composed of ingredients catering to the nutritional habits of Ecuadorians. Each food package contains sardines, rice, lentils, pasta, milk powder, sugar and tuna fish while hygiene kits come with soap, wet tissues, toothbrushes, toothpastes and diapers.

Ecuador was rocked by a 7.8 magnitude earthquake on April 16 that killed more than 650 people and injured about 17,000 others. The epicenter of the tremor was 27 kilometers away from Muisne, a small town in Manabi state located on the country's Pacific coast. Six out of 22 states in the small country were affected by the earthquake, which left some cities significantly damaged. The earthquake was particularly hurtful for a region populated by low-income citizens dependent on tourism revenues. The cities of Manta, Portoviejo and Pedernales in Manabi particularly suffered from serious destruction. About 7,000 buildings collapsed during the earthquake while more than 20,000 people were left homeless. The earthquake was followed by six aftershocks between the magnitudes of 5.5 and 6.2. Turkey was among the first responders to the disaster. A medical team was sent to the country while AFAD dispatched a delegation of humanitarian relief workers. AFAD was also scheduled to dispatch a medical aid team and a mobile hospital.

President Recep Tayyip Erdoğan offered condolences and aid to Ecuador one day after the earthquake. In a letter addressed to Ecuadorian President Rafael Vicente Correa Delgado, Erdoğan said Turkey is sharing the pain of the Ecuadorian people while he offered his condolences for the dead and wished a speedy recovery to the injured. Reminding that Turkey had endured similar pains in the past due to earthquakes, the president said his country is ready to send any aid needed for the South American country to heal its wounds. The earthquake, the worst in nearly seven decades, is expected to continue with minor aftershocks for weeks. The Ecuadorian government rushed to the aid of survivors, along with foreign aid workers but authorities acknowledged that poor road conditions delayed aid from reaching those in need, especially in remote areas. A Turkish team of volunteers who trained ECU 911 or Integrated Security Service, a state-run emergency and disaster relief service in Ecuador, was also invited to the country by Quito following the earthquake. The volunteers coordinate aid efforts, ranging from health services to food aid, in villages in Portoviejo. The volunteers now plan to install water purification systems for villages where the water grid was damaged by the earthquake.
RELATED TOPICS