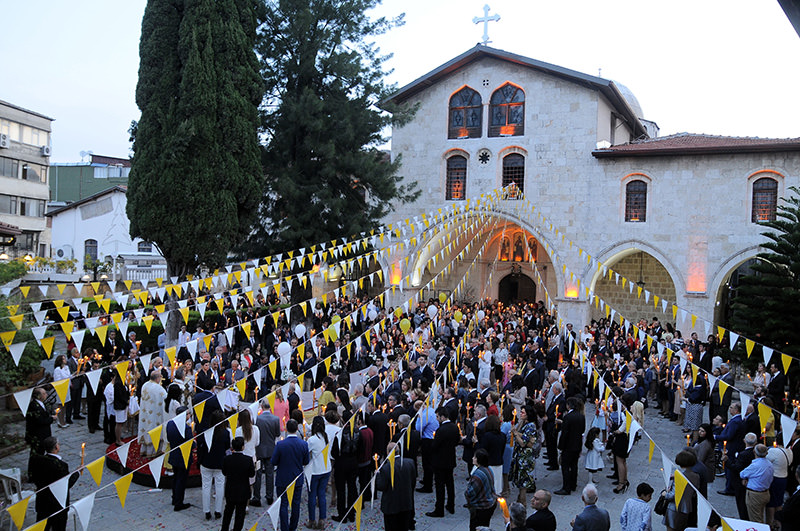 Turkey's Orthodox Christian community marked Easter Sunday with religious services on Saturday night and on Sunday. The faithful flocked to churches across the country where the Fener Orthodox Patriarchate, which oversees churches from the United States to the Middle East, is located.

Easter Sunday is the culmination of a series of religious events to commemorate the resurrection of Jesus Christ. Catholics celebrated Easter earlier as the Orthodox observe it in line with the Julian calendar, leading to the difference, despite a decision for a uniform observance of the event in the fourth century by a council of Christian bishops in western Turkey at the famous Council of Nicaea.

In Hatay, a southern province near the Syrian border, religious services started at midnight and culminated in a Sunday morning Divine Liturgy. The congregation lit candles and prayed at the services, which were followed by a breakfast attended by local officials.

Also known as Antioch, Hatay is a diverse province with a large Orthodox and Muslim population as well as ethnic minorities, from Arabs to Armenians. Speaking at the breakfast, Fadi Hurigil, president of the Antakya Orthodox Church Foundation, said Hatay has been one of the exceptional cities in Turkey for centuries as a place "where adhans [the Muslim call to prayer] mingle with the ringing of church bells." "We hope peace will prevail in the world where violence and hatred spread and that people will live together peacefully regardless of their faith or views and share their traditions and customs," he said.

In Mardin, another ethnically and religiously diverse city in southeastern Turkey, Syriac Christians marked Easter Sunday with a service in the ancient Kırklar Church. The church's priest, Gabriel Akyüz, joined the Mardin-Diyarbakır Syriac Archbishop Saliba Özmen in presiding over the Divine Liturgy, where a choir recited Turkish, Arabic, Assyrian and Hebrew hymns. The congregation then toasted Easter eggs to mark the occasion.