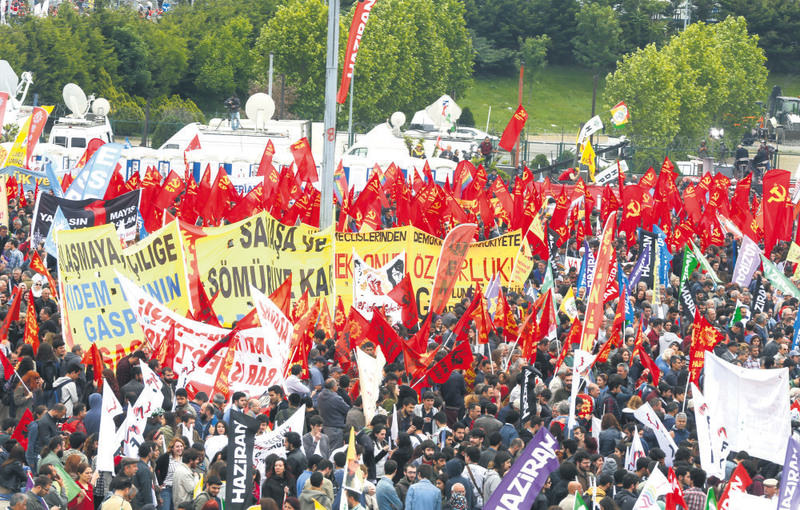 Labor Day on Sunday, otherwise a holiday in honor of workers, ended peacefully despite attempts to stage riots by supporters of terrorist organizations in Istanbul

After a long streak of violence, Turkey marked Labor Day without any major acts of violence for the first time on Sunday. Tight security measures and common sense by labor unions not to insist to hold rallies at a square off-limits due to safety concerns helped to make the events a peaceful occasion.

Though it was marked more peacefully compared to previous years, occasional violence overshadowed the events in Istanbul.A total of 231 people were detained by police in the city's Şişli, Beşiktaş, Beyoğlu, Zeytinburnu, Bakırköy, Küçükçekmece, Ataşehir, Sultangazi and Sancaktepe districts throughout Sunday for unauthorized rallies and attacking police officers who were trying to disperse them. Twenty-seven suspects were released hours later and early yesterday while others are remanded in custody. Detainees included 13 children.

Labor Day observed around the world on Sunday was a violent affair in the United States and Europe, where rioters clashed with police. Turkey was no exception, though this year's events in Istanbul were relatively peaceful occasions. Small groups from far-left factions and supporters of terrorist organizations engaged in scuffles with police who were blocking their access to Taksim, Istanbul's iconic square at which Labor Day events are banned. In districts outside Taksim, rioters took the opportunity to attack police. Thousands of police officers were deployed across the city to prevent possible riots. Some 6,000 police officers were deployed in Bakırköy while 15,000 police officers were on duty across the city to protect against possible riots. TOMAs, armored vehicles equipped with water cannons, were also deployed as part of the security measures. State-run Anadolu Agency (AA) reported as many as 24,500 police officers patrolled the streets of Istanbul on the occasion. The rallies were expected to disrupt the city's mass transit network, but with the exception of a suspension of subway services to Taksim, all mass transit vehicles operated normally, unlike in past years when the city's most popular means of transit, the Metrobus, was partially suspended.

Though it is presented as a platform for labor unions to air their grievances over problems workers face, Labor Day has been exploited by far-left groups defying authorities by staging riots in Turkey for years. An umbrella body of labor unions decided to mark the events in Bakırköy for their commemoration this year after giving up their insistence to mark the occasion in Taksim. Taksim Square carries special symbolic meaning for labor unions, as it was the scene where 37 people were killed when unknown gunmen opened fire and a stampede ensued in 1977, three years before a military coup which followed a decade of political turmoil in which the country was deeply divided by radical leftist and right-wing groups.

Taksim Square was closed to Labor Day rallies from 1977 until 2010. Rallies in 2010 were peaceful, but after the ban was reinstated in 2012, they again turned violent.

Turkey has been on alert recently after a string of terrorist attacks in Istanbul and Ankara blamed on DAESH and the PKK, the two main terrorist organizations threatening the country. Large-scale rallies are often cancelled or banned by authorities over security concerns. Labor Day celebrations in Adana, a southern city, were cancelled after police told organizers that there was a credible threat of an attempted suicide bombing being planned to take place during the gathering. Suicide bombings in July and November 2015 targeted rallies by groups linked to labor unions which organized the rallies in Istanbul and killed more than 130 people.
Last Update: May 03, 2016 1:25 am
RELATED TOPICS