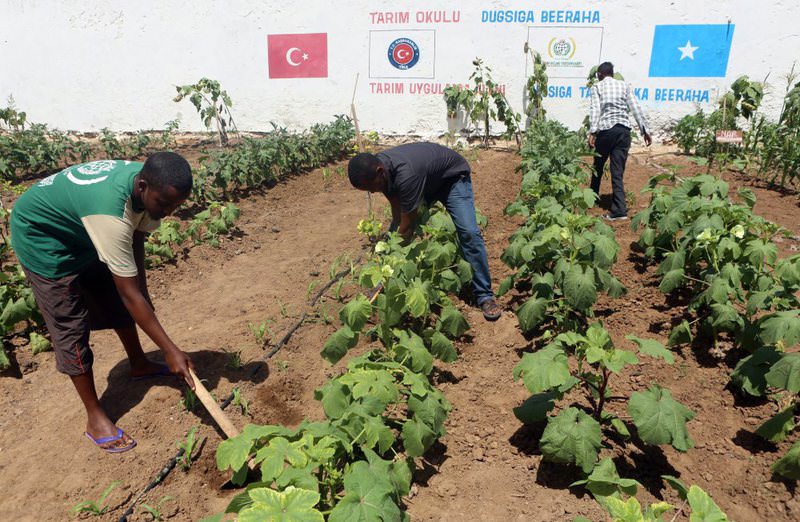 An agricultural training project in Somalia by Tu0130KA helps locals establish sustainable agriculture in the face of drought.
by Daily Sabah with AA May 07, 2016 12:00 am

The state-run development agency TİKA, which oversees development and aid projects around the globe, announced Tunisia was the biggest recipient of aid, receiving $44.7 million last year, followed by Somalia

As Turkey expands its international clout, the country looks to boost its development aid around the world. The state-run Turkish Cooperation and Coordination Agency (TİKA) leads efforts in this field. The agency recently released a report on its 2015 activities and shows Tunisia, where the agency runs several development projects, was the biggest recipient of TİKA aid with $44.7 million. It was followed by another African country, Somalia, which benefited from projects worth $22.3 million. Afghanistan, Chad, Macedonia and Kyrgyzstan followed Tunisia and Somalia as the biggest recipients. African countries constitute the majority of aid recipients with a total of $102.6 million and Asian countries follow them with $47.1 million.

Rather than direct financial aid, TİKA funds projects and programs already established in other countries and funds worth more than $107.9 million were channeled this way by TİKA. Other funds cover technical cooperation, aid for sustainable agricultural programs and to support local nongovernmental organizations. TİKA seeks to extend its outreach this year by opening new coordination offices in countries without the agency's presence.

Development aid to Tunisia includes a chicken-breeding project for 20 low-income families, training Tunisian law enforcement officials and a project to create beekeeping jobs for impoverished families. In the previous years, TİKA has supplied hundreds of vehicles for use by local Tunisian municipalities.

Turkey and Tunisia have ties dating back to the Ottoman period and relations between the two countries deepened after Tunisia's Jasmine Revolution in 2011, which paved the way for the Ennahda Movement to come to power. Ennahda is known for its support of the Turkey's current Justice and Development Party (AK Party) government, and its leader, Rached Ghannouchi, frequently visits Turkey.

Previously, a little-known state apparatus founded with the purpose of helping former Soviet republics after the collapse of the Soviet Union, TİKA rebranded itself in the past decade as a major source of improving Turkey's international clout and helping other countries develop by reaching out to people in need across the globe. The agency has recently showcased a new array of 53 projects scheduled to be completed this year in an event titled "The Same Signature in Different Geographies," reflecting how Turkey's global outreach increased after the ruling AK Party came to power more than a decade ago. They cover everything from the restoration of a mosque in Thailand and the construction of homes in Sri Lanka, to the construction of a small village in Afghanistan and a stadium in the island nation of Comoros off the eastern coast of Africa.

In 2014, Turkey delivered development aid worth $6.5 billion, of which foreign aid constitutes more than $2.5 billion. Turkey was second in total foreign aid delivered in 2014 only after the United States. TİKA is active in 50 countries where it has offices but has conducted projects in 140 countries.

TİKA President Serdar Çam said at the recent event in Ankara that Turkey raised "the voice of conscience" in a world embattled with chaos, poverty and insecurity with a modern approach to development and cooperation. Also, Turkey emphasizes the concept of waqf (foundation) - a type of Islamic charity. Çam said Turkey shared its wealth and experience with the world, and the agency placed people at the heart of the projects around the world "to spread goodness, mercy and justice."
RELATED TOPICS