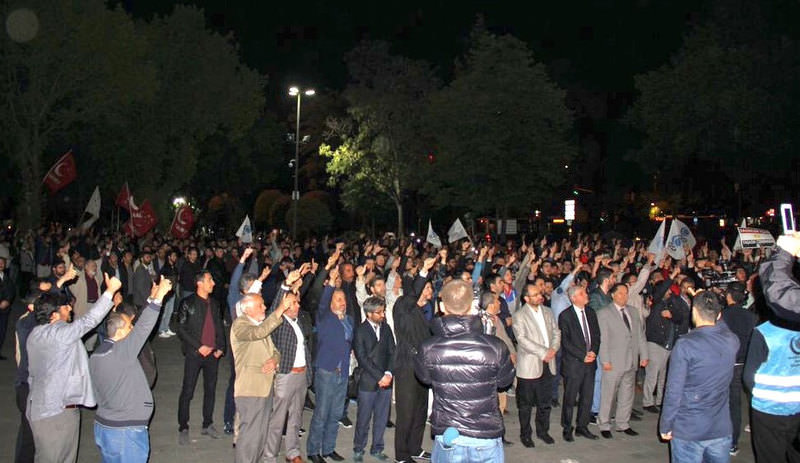 Meanwhile a group of AGD Istanbul branch members held protests in a park in Istanbul as well.

Motiur Rahman Nizami, the leader of Bangladesh's Jamaat-e-Islami group, who was convicted of committing wartime atrocities, was hanged.

Security has been stepped up outside the Dhaka prison facility and all nearby streets have been barricaded and closed to traffic.

Nizami, 73, was earlier sentenced to death in October 2014 and accused of committing atrocities during war of independence of Bangladesh in 1971 by the International Crimes Tribunal.

Preparations to execute the Jamaat-e-Islami leader began last Thursday when the country's Supreme Court rejected his request for a review of the death sentence issued against him.

The prison authorities then read the verdict out to Nizami, who was asked if he sought the mercy of President Abdul Hamid, to which Nizami reportedly replied in the negative.

Nizami was born in 1943 in Sathiya village of the district Pabna-north of Bangladesh. His father was Lutfur Rahman Khan. Nizami attended school at a local madrassah.

His political career started with Islami Chatra Sangha-student wing of Jamaat e Islami in the then Pakistan. Later he became the head of the organization of the Pakistan.

Nizami became the head of the Bangladesh Jamaat-e-Islami in 2001, when the then chief Gholam Azam stepped down.

He was the minister of the country in 2001 to 2006 during the Bangladesh Nationalist Party alliance term. He was also the Member of Parliament from his own constituency Pabna-1 in 1991.

Nizami had to leave Bangladesh after the independence when the then President Sheikh Mujibur Rahman had banned Jamaat for its collaboration with Pakistan army during the war in 1971. He returned to Bangladesh in 1978 when the President Ziaur Rahman's regime.

He is survived by his wife, two sons, their wives, grandchildren.

His body is taken to his village-Sathiya of Pabna for his funeral and burial.