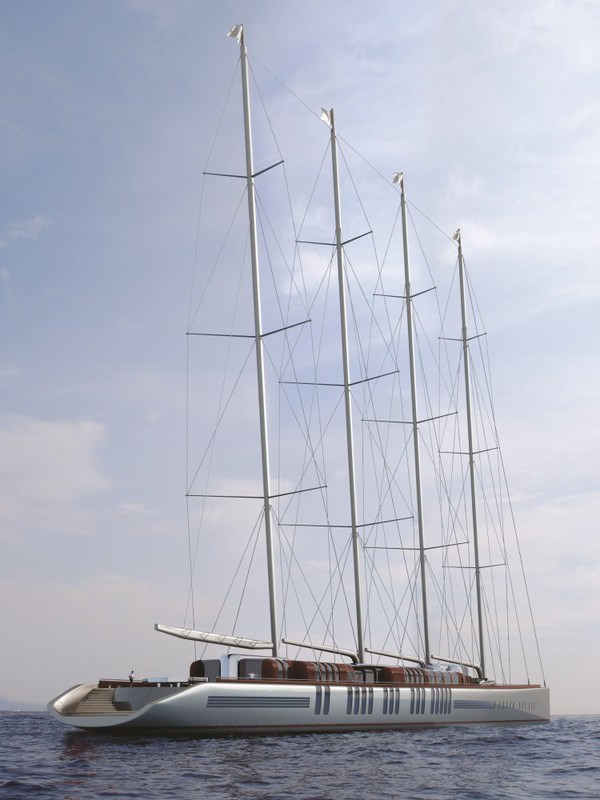 by Daily Sabah with IHA May 12, 2016 12:00 am
A Turkish yacht company has announced that it is building what will be the world's largest schooner, which is set to sail in 2020. The 147-meter superyacht, the Dream Symphony, is an ambitious project by DSV, which is based in a large shipyard in the southwestern city of Muğla. Construction of the schooner's hull will be completed in 2017, and it will be built exclusively of iroko, a type of hardwood common in West Africa, company officials said. Some 5,000 cubic meters of wood will be used in the construction, and DSV pledges that they will plant a tree in Africa for every tree used in construction.

Currently, the record for the largest schooner is contested between the EOS and the Maltese Falcon, which have a length of 92 meters and 78 meters, respectively. The four-mast Dream Symphony, jointly designed by the U.K.'s Ken Freivokh Design and Dutch Dysktra Naval Architects, will surpass them once completed. The two-deck schooner has an upper deck divided into owner and guest quarters and a sheltered area, which can be fully enclosed in bad weather, that has facilities, including a swimming pool with a rising floor that can be used as a helipad. Boasting 5,000 square meters of sails, the yacht will have a top speed of up to 60 kilometers per hour.

Company officials estimate the total cost of the yacht will be around 250million euros to 300 million euros. DSV General Manager Hülya Alizade told İhlas News Agency (İHA) that the planning for construction took about three years and that the hull was nearing completion after two years. "It usually takes five to 10 years to build such a big yacht. It is a difficult process, but we believe it will be completed on schedule," she said. Alizade said that although the design was the work of foreign companies, its construction is entirely the work of Turkish shipbuilders.

The size of Turkey's yacht and boat market is around 450 million euros annually, while the industry, including sub-industries, brings in around $5 billion to $5.5 billion annually. With lower labor costs and higher production quality, Turkey's yacht building industry seeks to compete with foreign rivals.
RELATED TOPICS