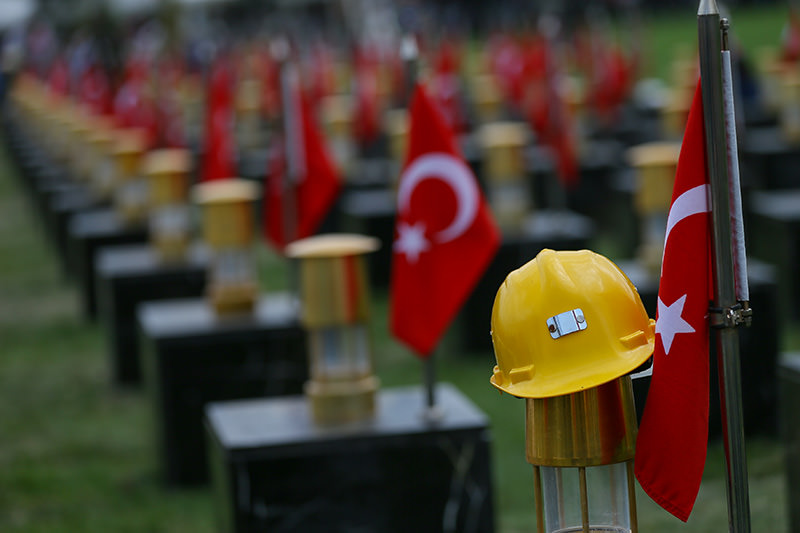 Grieving families flocked to cemeteries in the town of Soma on Friday to mark the second anniversary of a mining disaster that claimed lives of 301 miners. The deadliest tragedy in Turkish mining history, the incident has led to major changes in work safety

On Friday, the small mining town of Soma in the western province of Manisa revisited the sorrow it was engulfed in two years ago, with hundreds visiting cemeteries to mark the second anniversary of a mining disaster. On May 13, 2014, a fire broke out at a mine and the ensuing smoke killed at least 301 workers trapped dozens of meters below while hundreds of others managed to reach the exit. The incident was the deadliest tragedy in Turkish mining history, and preceded another disaster which claimed 18 lives in the central Turkish town of Ermenek in October 2014.

The disaster was a devastating blow to this mining community, where almost every family has a member or relative working in coal mines, and paved the way for further measures for work safety after the mining company's executives were found complicit in neglecting safety measures.

On Friday morning, the relatives of victims streamed into the cemetery where the victims were buried. Some quietly recited the Quran and prayers, barely holding back tears while they left flowers on graves. Children left drawings for their late fathers. Local officials and lawmakers attended an official commemoration ceremony.

Zeher and İsmail Duman were among the visitors to the Soma Mine Martyrs' Cemetery. The couple lost their 26-year-old son İbrahim in the disaster. "He was my only child and he liked me so much. I can't cry anymore, because my eyes dried up after he left," Duman told Anadolu Agency (AA) as she struggled to speak by the graveside. Still, she is proud that her son was "a mine martyr."

Fatma Özcan was one of the first visitors to the cemetery on Friday. Her son Tolga, 23, was one of the victims. She said she left the town after her son died in the disaster as she could not stand seeing his coworkers, who reminded her of her son. "I have gone through so much pain, and today I can only pull myself together with medication. This pain will never go away," she told Doğan News Agency. Tolga Özcan was on his last shift in the mine, one day before the start of his leave. The young man also did not know his wife was pregnant, and his daughter is now one-and-a-half-years old. Gülsüm Çolak, a woman who lost her son Uğur in the mine disaster, said their sorrow has not finished, and demanded "justice" for their son's death.

The justice Mrs. Çolak seeks currently remains elusive, as the scale of disaster prolongs the judicial process. Executives from Soma Kömür İşletmeleri A.Ş., the company running the mine, were arrested following the disaster, as well as the manager of the mine and other senior officials. Currently, eight people stand trial on charges of causing deaths by negligence and causing serious injuries, facing multiple life terms as every charge is multiplied by each miner that died in Soma. Thirty-eight others were released pending trials, but face up to 15 years in prison for similar but lesser charges.

The mine was considered safe, but on May 13, 2014, an explosion caused a fire about 2,000 meters from the entrance. The fire caused the mine to fill with toxic gas. Following the disaster, the government took a series of measures to ensure better work safety and tighter inspections in private-run mines, which critics charge often ignore costly safety measures to keep profits high.

Labor and Social Security Minister Süleyman Soylu was among the visitors at the cemetery. He accompanied a labor union leader and paid a visit to home of Meliha Alkaş, who lost both her husband and son in the disaster. Soylu told reporters that the mining disaster taught a lesson for government, state, employers and labor unions. "We have responsibilities to ensure the safety of workers, just like employers and unions have. I won't tell miners today what we have done for their safety, because our efforts are part of what a government is responsible for. However, what we really should strive to achieve is taking steps together with all the actors in the mining sector to prevent a repeat of this disaster," he told reporters. Soylu recalled recent remarks by President Recep Tayyip Erdoğan in which he called on companies to see workers not just as economic assets. "We should raise awareness about these issues," said Soylu.

Turkey paid more than TL 24 million ($8.1 million) to the surviving workers and families of victims, as well as salary support for six months, along with monthly payments designated for those workers who die in occupational accidents. The government also offered public sector jobs for the relatives of victims, as part of efforts to help families where deceased workers were often the sole breadwinners for their households.