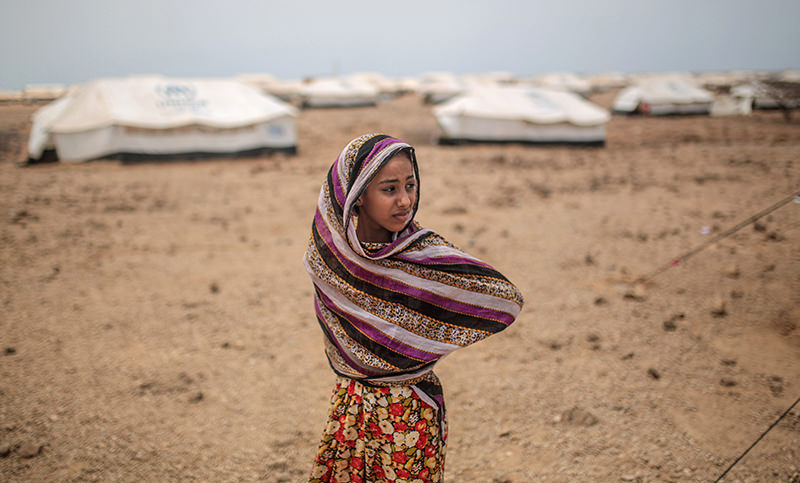 As the first-ever international humanitarian summit is only a week away, Turkey's leading aid organizations are focusing on the need to "localize aid" with "stronger local actors".

As Istanbul gets ready to host the World Humanitarian Summit between May 23-24, Anadolu Agency spoke to domestic NGOs who say empowering local communities is the best way to cope with disasters.

Head of the Turkish Red Crescent, Kerem Kinik, says if local humanitarian aid groups are not strengthened "communities will be more open to disasters".

"Aid made by larger international organizations in local places is not sustainable and results in very high costs."

Kinik says reform of the humanitarian aid system is needed, describing it as "reshaping aid".

"A draft final report to be shared by the UN at the end of the summit is almost ready," Kinik says. "We do not expect a radical change, but it is a significant summit which will only focus on humanitarian issues. It will also be an opportunity to tell the world Turkey's way of humanitarian aid."

The summit will feature a number of high-level leaders' round-table talks, as well as briefings, seminars, workshops, panel discussions and an exhibition fair.

Each organization is expected to bring its own agenda to the world summit. Among these are Turkey's Humanitarian Relief Foundation (IHH) and the Support To Life aid agency.

"Localization of humanitarian assistance" is of top priority for these two groups which have been actively involved in the preparatory phases leading up to the summit, starting with the first regional consultation in June 2014 in Abidjan, Ivory Coast.

Sema Genel Karaosmanoglu, executive director of Support To Life, says: "One of the strongest and most important messages that came out of the consultation phase was the need to localize aid."

She says in the current humanitarian system, a great majority of global funding stays with global actors "that are remotely positioned from affected people".

Complaining that a significant portion of global humanitarian funding is used "to keep the heavy machinery of the UN running," she says: "It is striking to see that less than two percent of the total funding goes to local actors that are in direct contact with the affected populations.

"For humanitarian aid to be effective, we need to see more resources channeled to local actors who are known to provide the most effective aid."

"It is only when local aid organizations grow stronger that the continuity of humanitarian aid is ensured."

He says during humanitarian crises in developing countries, it is highly difficult to get over problems quickly "as both the states and national NGOs are not strong enough".

Pointing out that millions of people are displaced every year due to war-related crises, Aydin says the classic UN methods of providing humanitarian aid "are not helping anymore".

"The UN is also looking for a solution to those long-lasting crises [...] What we expect out of the summit are concrete steps towards overcoming such … problems."

Karaosmanoglu admits there are serious challenges to reforming aid delivery:

"Given the power dynamics in the humanitarian aid structure as it currently stands, it will not be easy to make significant changes. But this is a slow process and the seeds for that change are being sown."

Her association has had the chance to contribute to many of the themes and discussions on the effectiveness of humanitarian aid and "how they can reform the system in order to better reach out to the millions of affected people that need assistance".

She talks about two concrete initiatives which NGOs see as important steps.

One is the launching of a global network of local actors (NEAR-Network of Empowered Aid Response) who have met each other throughout preparatory consultations and have a stronger voice in changing conditions and resources for local actors.

The second initiative is a 'Charter for Change', which is a set of commitments put together and endorsed by 23 international NGOs. Signatories commit to passing larger portions of aid funding to local partners, supporting and building their capacity, and establishing a more equal partnership in joint response to humanitarian crises.

Karaosmanoglu also says one of their aims at the summit is "to show the power and impact of local actors in Turkey in the provision of humanitarian assistance to nearly three million Syrian refugees that are in need of food, shelter, health care, and education".

"The amount of support provided by local actors in Turkey to refugees is not visible in the current humanitarian system," she adds.

"Our goal is to visualize on a map the many diverse interventions made by a diverse set of local actors, emphasizing the need for more resources to be channeled to these actors."

Aydin from the IHH also points to the efforts made for Syrian refugees.

IHH-one of Turkey's first international aid organizations, which currently operates in over 140 countries-has carried out numerous aid work in the field.

The foundation has saved over 2,000 civilians, including journalists and aid volunteers, from prisons in Syria since the conflict in that country started, Aydin says.

"Humanitarian diplomacy" is what the foundation will also be focusing on during the summit.

"None of the aid organizations can be indifferent to those innocent people being kept in prisons," he said, "especially … aid volunteers."

"By international agreements, there should be no hindrance to them to deliver aid to the needy."

Although he is not very hopeful about a solution to the Syrian crisis, he says: "I hope that the summit at least can be a step towards making vulnerable people there sheltered."

Reiterating that some concrete suggestions and solutions have been discussed prior to the summit, he says:

"The upcoming event is a historic one. Now, what is significant is that the UN should support and practice [resolutions]. If not, all the work and effort going on for two years on how to achieve more effective humanitarian aid will be wasted.