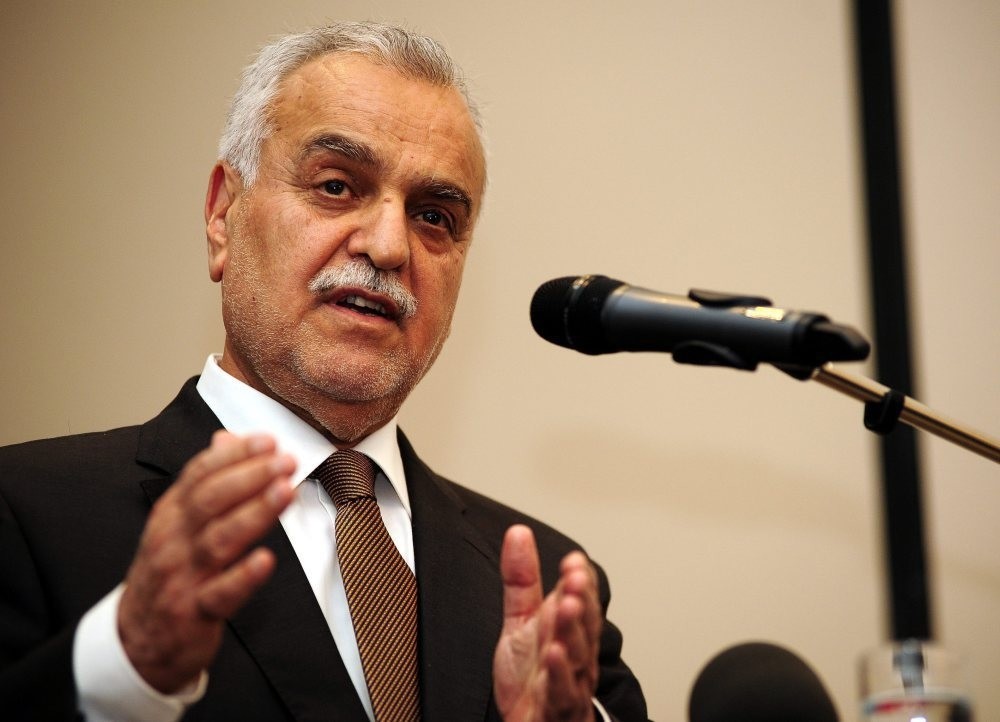 Al-Hashimi speaks at a press conference in Ankara in 2014. The former Iraqi vice president had to leave his country over what he called a politically motivated trial against him.
by Daily Sabah May 19, 2016 12:00 am

Tariq al-Hashimi, the former vice president of Iraq who settled in Turkey after Iraqi courts sentenced him to death four years ago in what he called a politically motivated case, has been removed from Interpol's Red Notice, as reported by Iraqi Kurdish media

Iraqi Kurdish media outlets reported that Tariq al-Hashimi, a veteran Sunni politician from northern Iraq who was convicted of murder and sentenced to death in absentia in 2012 by Iraq, was removed from Interpol's Red Notice, which Interpol describes as "seeking the location and arrest of a person wanted by a judicial jurisdiction or an international tribunal with a view to his/her extradition." Al-Hashimi, who was vice president of Iraq before his conviction, has repeatedly claimed innocence and blamed the predominantly Shiite government led by Nouri al-Maliki for bringing politically motivated charges against him at a time of high tensions between Shiite and Sunni communities in post-war Iraq.

Speaking to Al-Jazeera, al-Hashimi said Interpol's decision, which he describes as based on "serious doubts about his conviction," proved that Iraqi courts were politicized. He said the decision by an international entity like Interpol showed the state of Iraqi courts. "It indicates that the judiciary works for politics in Iraq to stifle any opposition. Though I am vindicated on an international platform, there still remain a death sentence issued against me and unfair accusations against other opposition figures in Iraq."

Al-Hashimi was the leader of the largest Sunni political bloc following the post-war elections in 2005. He vocally opposed strife between Sunnis and Shiites and accused then-Prime Minister al-Maliki of attempts to prevent Sunnis from participating in decision-making mechanisms. Speaking to Daily Sabah in 2014, al-Hashimi said that al-Maliki's campaign against him was "the first salvo fired" in a campaign against Sunnis following the withdrawal of U.S. forces from Iraq in 2011. He has also claimed he was targeted because he and others have shunned Iranian meddling in Iraq's affairs, as well as condemning rising sectarianism and corruption.

The conviction and subsequent death sentence against al-Hashimi stem from charges that he ran a hit squad targeting Shiite government officials and masterminding bomb attacks. Al-Hashimi was not in Baghdad when security forces raided his residence and detained his bodyguards, but he denounced the charges against him from the northern Iraqi city of Irbil and did not return to Baghdad. After a brief stay in northern Iraq, al-Hashimi traveled to Qatar and Turkey, where he was granted residence.

Interpol issued a Red Notice warrant after al-Hashimi's conviction in absentia confined his travel to only a handful of countries. Al-Hashimi criticized Interpol but was pleased with his removal from the list. "Interpol should have examined the documents presented by Iraqi authorities better at first and should have taken into consideration that Iraq is ruled by an autocratic regime and a scene of sectarian and political violence. They should have viewed this as a set-up for a person holding the office [of vice presidency]," he told Al-Jazeera.

Rudaw, an Iraqi Kurdish media outlet, reported that Interpol's investigation committee decided for his removal on the grounds that there were suspicions about tangible evidence against al-Hashimi based on information supplied by Baghdad.

The Iraqi case against al-Hashimi laid bare one of the most important challenges awaiting Iraq after the ouster of the Baathist regime of former dictator Saddam Hussein and the ensuing transition period that saw sectarian strife fueled by Shiite political movements backed by Iran. The al-Maliki government is accused of imprisoning political opponents, especially Sunnis, on trumped-up charges under the guise of anti-terrorism laws and a de-Baathification policy that purged anyone affiliated with the former Baath regime from public offices, which marginalized a large number of Sunnis who were previously forced to serve the repressive Saddam Hussein regime.

Al-Hashimi told Al-Jazeera that Interpol's decision also provided hope for his bodyguards, office workers and others facing similar charges and called for the Iraqi president to not sign pending death sentences and to retry all defendants. "Now is time to end this trial and oppression of all defendants," he said.
RELATED TOPICS