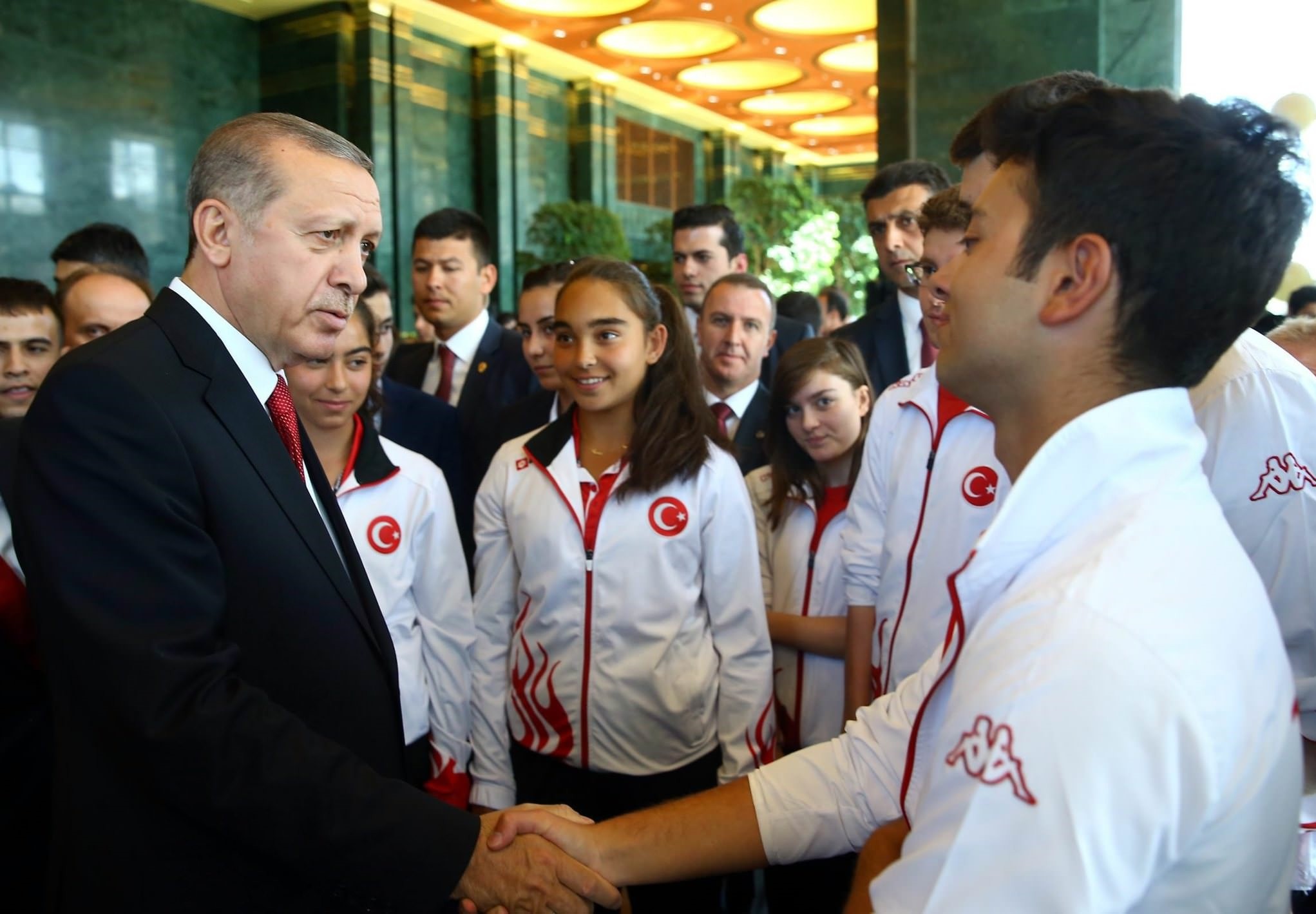 President Recep Tayyip Erdou011fan hosted young students and athletes at a reception.
by Daily Sabah May 19, 2016 12:00 am

Turkey marked Commemoration of Atatürk, Youth and Sports Day, a national holiday to honor the Republic’s founder and celebrate the spirit of youth Thursday. Ceremonies were held across the country for the occasion

May 19, an annual national holiday celebrated as Commemoration of Atatürk, Youth and Sports Day, was celebrated across Turkey on Thursday. Originally marking M. Kemal Atatürk's (the founder of the Republic of Turkey) arrival in the northern city of Samsun in 1919, the day was later dedicated by Atatürk to the youth.

Atatürk's trip from British-occupied Istanbul to Samsun after World War I, began Turkey's War of Independence. Naturally, ceremonies across the country focused on remembering this event and Anıtkabir, the mausoleum in the capital Ankara dedicated to Atatürk was at the heart of events crowds of citizens from all around the country visited Anıtkabir, which saw an official ceremony in the morning. The services were led by Youth and Sports Minister Akif Çağatay Kılıç, with youth from around the country laying flowers in memory of the former Ottoman commander credited with Turkey's victory in the War of Independence, and subsequent reforms to modernize and rebuild the post-war country.

Ceremonies in Ankara focused on the youth, with President Recep Tayyip Erdoğan hosting a reception for young citizens in the Beştepe presidential complex. The president urged youngsters that pursuing a career was not enough, that they should be active participants in the life of their country and should "win the hearts of the nation." He called upon them not to turn their backs on their country or to developments in the world.

Erdoğan cited the "2023 goals" he set out during his tenure as prime minister, a set of reforms for the development of Turkey on the centenary of the Turkish republic, ranging from economic growth to becoming a global power, and said the youth should take them further with "vision for 2053."

The president also addressed the "youth brainwashed into joining terrorist organizations," and called for the young to become "good" towards humanity, "rather than simply being a good lawyer, a good doctor or engineer." "Keep wisdom and knowledge together, spend your time wisely, be constructive," he said.

Erdoğan also met youth delegations and foreign university students in Turkey at a live event at the presidential compound broadcast by Daily Sabah's sister TV networks A Haber and ATV on Thursday evening.

The opposition Republican People's Party (CHP), the country's first political party in post-Ottoman period founded by Atatürk, staged a march to Anıtkabir amid security concerns in the capital city, which has seen three attacks within five months, killing hundreds of people in an unprecedented wave of terror that is blamed on the PKK and DAESH terrorist organizations. Authorities initially banned the march by the CHP for fear of terror attacks, but the party's supporters and Chairman Kemal Kılıçdaroğlu were later allowed to undertake the journey there under the condition of a change to their route to allow for extra security.

Anıtkabir and Ankara in general were the focus of earlier security warnings from Turkish intelligence and the U.S. embassy in Ankara, which warned its citizens of threats from international and local terrorist groups, noting that tourists have been explicitly targeted by terrorist organizations in the past in Turkey, referring to the two attacks in January and March that killed German, Israeli-American and Iranian tourists. The U.S. embassy called for their citizens to ensure their own safety.

Turkish media outlets, quoting intelligence sources, previously reported that DAESH was planning attacks at Anıtkabir on May 19. The site was heavily protected yesterday, although the Turkish Armed Forces, which maintains the mausoleum and oversees its security, assured citizens that it would be open to visitors throughout the day.

In Samsun, people re-enacted the day Atatürk and his friends set foot on the city in 1919 after an arduous journey aboard a barely functioning boat and threat of detection by occupation forces. Military officers aboard a boat handed over a flag symbolizing the journey to the city's youth.

Since 1938, the day originally dedicated to War of Independence has also been celebrated as Youth and Sports Day, much to the chagrin of the youth, who would reluctantly take to stadiums across the country to perform bizarre feats, such as human pyramids, in scenes which critics described as reminiscent of North Korean national celebrations. In recent years, gymnastic feats have largely been scaled down, and sporting events such as races have replaced them in most parts of the country. Yesterday, youth picked from among high school students also performed folk and modern dance shows in nationwide celebrations.