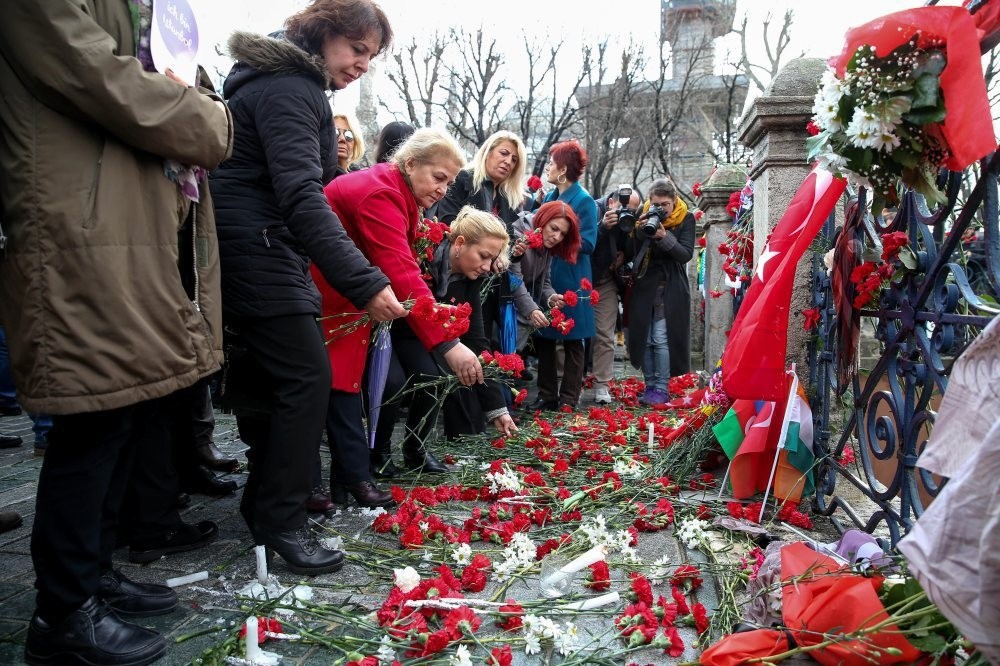 People leave flowers in the site of the blast at Sultanahmet Square.
by Daily Sabah with IHA May 24, 2016 12:00 am

The official investigation into the Jan. 12 suicide bombing which ripped through Sultanahmet (Blue Mosque) Square is drawing to a close, with prosecutors filing an indictment against 26 suspects who face multiple life sentences for the attacks which left 12 people dead. The suspected mastermind in the attack, Omar Abu Abid, is described by prosecutors as the "Emir for Iraq" of the DAESH terrorist organization.

The January terror attack was perpetrated by Syrian national Nabil Fadli, who blew himself up amid a group of German tourists who were visiting Istanbul's historic landmarks. It was the deadliest attack carried out in Istanbul by DAESH which poses an increasing threat to Turkey. The terrorist organization occupies vast areas of land near the borders of Iraq and Syria, Turkey's bordering countries.

The indictment states that Fadli did say Fadli surveyed the historical sites in Istanbul's Sultanahmet district as well as the vicinity just days before the bombing, marking photos of the Ottoman-era Sultanahmet (Blue Mosque) and the Hagia Sophia, both major tourist attractions in the heart of the city. Fadli arrived in Istanbul 15 days before the attack and staked out the area for four days, according to prosecutors.

Security forces launched nationwide anti-terror operations after the attack, arresting scores of suspects. Twenty-six people will stand trial, including 18 suspects currently in custody. Two suspects remain at large. Prosecutors are asking for multiple life sentences and prison terms of up to 840 years in prison for the suspects. There are a total of 16 plaintiffs in the case, including Sibel Şatıroğlu, the Turkish tour guide who was hailed as a hero for identifying the suicide bomber just seconds before the lethal blast and warning tourists to run away.

The suicide bombing involved about one month of preparations, according to the indictment, with suspects smuggling explosives into Turkey, transporting them illegally to Istanbul, using disposable cellphones to evade detection and exploiting encryption software for online communications.

The suspects are believed to have carried explosives in tightly sealed and stitched bags. Prosecutors say one set of explosives was prepared by DAESH militants in Turkey and another was smuggled across the border.

Fadli entered Turkey by posing as a refugee from Syria and registered with authorities to avoid drawing suspicion. In a country currently hosting more than 2.7 million refugees from war-torn Syria, he visited Istanbul's most popular destinations, including Taksim Square, the Sultanahmet (Blue Mosque), Hagia Sophia and the Galata Tower; taking photos of the landmarks, prosecutors say.

Prosecutors portray the 28-year-old suicide bomber as a veteran DAESH militant who was involved in numerous battles in Syria. His accomplices, mostly Syrian nationals, face charges of aiding and abetting acts of terrorism and "attempting to overthrow the constitutional order of Republic of Turkey," a charge designated for terrorism and related crimes, which carries life terms. Lower sentences, up to 15 years, were also requested for several suspects, for membership of a terrorist organization.

The attack in Sultanahmet square was the first major terrorist attack by DAESH in Istanbul. It was also the fourth attack in Turkey to be blamed on the DAESH terrorist organization, following bombings in Suruç, Diyarbakır, Şanlıurfa and Ankara in 2015. Turkey is on the hit list of the terrorist organization, as the government and populace are considered "despotic disbelievers," and faces a DAESH threat due to its proximity to areas controlled by the militant group in Syria. As Turkey is part of the international coalition against DAESH and has made efforts to stem the flow of foreign fighters looking to join the group, the risk of attacks from the militants has increased. Over the past few months, DAESH has rained a shower of rockets on Kilis, a border town, which have killed at least 20 people.
Last Update: May 24, 2016 1:23 am
RELATED TOPICS