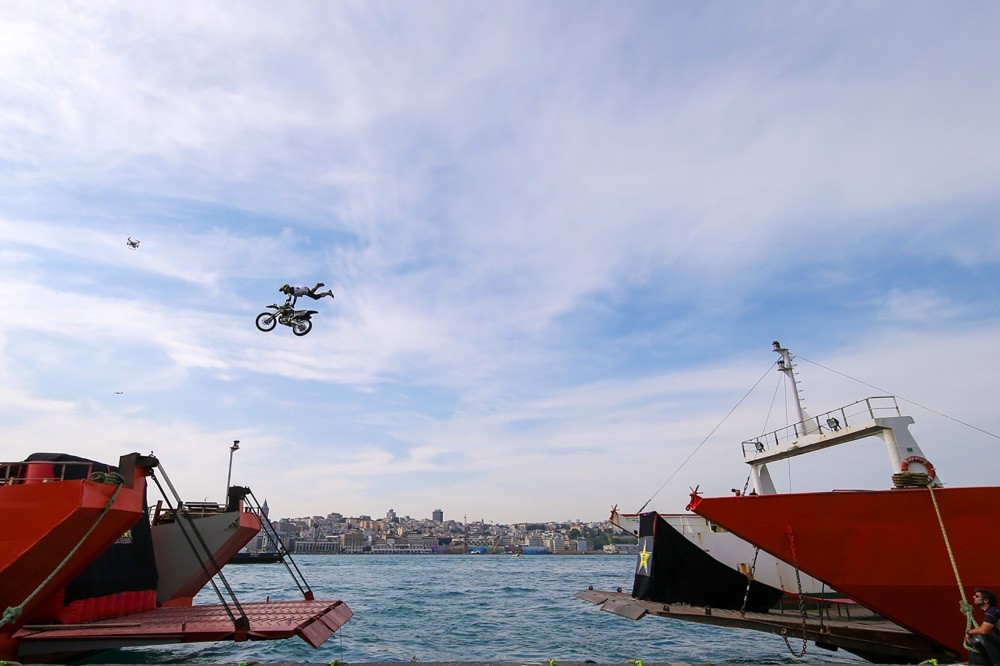 by Daily Sabah with AA May 26, 2016 12:00 am
Freddy Peters, a German freestyle motocross rider, amazed his Istanbul audience by jumping from ship to ship on Wednesday, setting what he claims is a world record of 21 meters.

The stunt, sponsored by an energy drink producer, was held for the first time in the Bosporus which divides Asia and Europe.

Against a backdrop of Ottoman and Byzantine-era landmarks off Istanbul's "historic peninsula," Peters warmed up by making three preliminary jumps between ships set at a closer distance apart. Then, he jumped between two ships anchored off the Sarayburnu shore on the outskirts of the hill where the Ottoman sultans' Topkapı Palace is located, for the record-setting attempt.

Speaking to Anadolu Agency (AA) on the sidelines of the event, Peters said he carried out similar feats in Brazil, Israel, Russia, Namibia and South Africa and was delighted to perform the jump in Bosporus. Though he described it as, "the best he could do in Istanbul," he raved about the various locations in the city where he could perform the stunt. "Istanbul is a unique city for me. There are many beautiful places where I can perform, such as the Hagia Sophia and Topkapı Palace. I was impressed with the Yerebatan Cistern and I would very much like to make a similar jump there," he said.

Still, Peters said that keeping his motorbike on the ground is a daunting task in Istanbul's "crazy" traffic, which he describes as "a peculiar experience."
Last Update: May 26, 2016 1:06 am
RELATED TOPICS