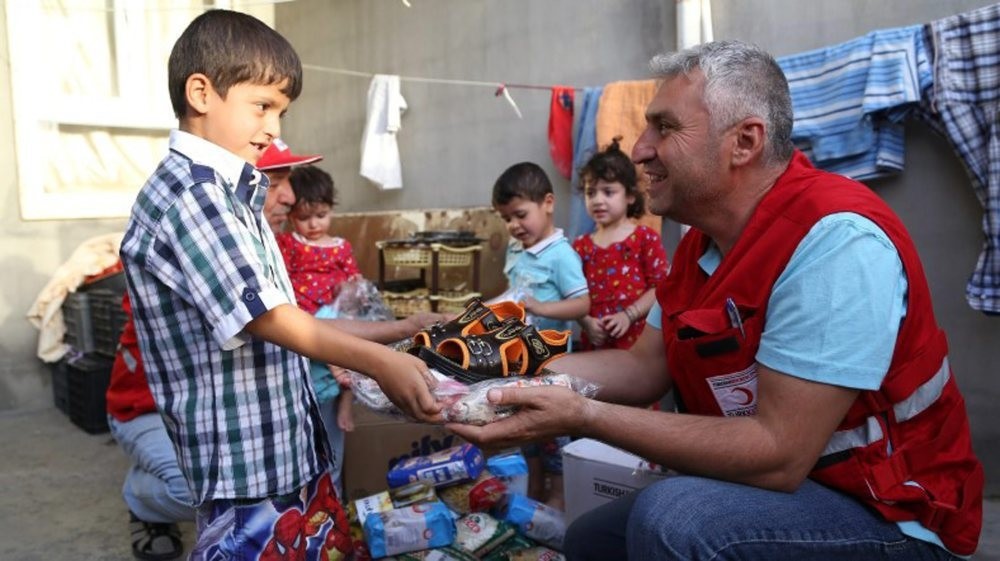 A Turkish Red Crescent worker delivers aid to Iraqi children. The Red Crescent was among the sponsors of the forum, where redefining priorities for humanitarian aid was discussed.
by Yusuf Ziya Durmuş May 27, 2016 12:00 am

Participants in the Global Donors Forum in Istanbul highlighted the need for larger burden-sharing to address humanitarian needs, and expanding media capacities for Muslims to improve the image of Islam on the second day of the forum, focusing on Islamic philanthropy

The Global Donors Forum, a two-day event by the World Congress of Muslim Philanthropists, wrapped up on Thursday, with participants discussing how to change priorities of humanitarian efforts and improve the public perception of Muslims in the face of constant defamation from critics of Islam.

Speaking to Anadolu Agency on the forum sidelines, Kerem Kınık emphasized the need to boost cooperation between political and economic entities and humanitarian aid actors, at a time of reduced contributions to global aid efforts.

Kınık, whose aid agency oversees aid efforts for refugees and those internally displaced, both in Turkey and abroad, said international political and economic mechanisms needed to work together with humanitarian aid actors to prevent prolonged conflict. Kınık said the Global Donors Forum contributes to driving humanitarian efforts, and providing a sustainable donation and financing system against global humanitarian crises with discussions about reforms which the current humanitarian aid system needs to function well in the new century.

Kınık said 2005's sweeping reforms of the global humanitarian system were positive developments, but amendments were needed due to a few flaws. "The 2005 reforms led to the establishment of a new coordination mechanism by the United Nations and establishment of humanitarian groups distinguished by their specialties, to establish a system where everyone focused on what they do best, instead of multi-tasking for every organization. It largely succeeded. A sustainable financing model was established. Yet there have been challenges to these reforms." Kınık added that humanitarian aid mechanisms should not be confined to solely supplying food and medical kits to people in need.

He said that they expected a fair sharing of burden for humanitarian aid actors and closer cooperation between political and economic entities and humanitarian aid groups. "Otherwise, problems grow. You can help one person, but ongoing clashes leave ten others needy. We need to stop prolonging conflicts and we need an integrated approach to achieve it. Global need for aid is over $300 billion, but we have been able to collect only $26 billion globally, roughly ten percent. This is a major weakness. You cannot provide sufficient protection and aid for people with this. Humanitarian aid actors are doomed to remain either big or small. The current system keeps them that way. We need a fair financial sharing of the burden. The system should provide more financing for local humanitarian actors. Unfortunately, the response to United Nations' call for humanitarian aid remains at only 42 percent of (global) aid," he said. Kınık said the World Humanitarian Summit, which preceded the Global Donors Forum, was an opportunity to set up an integrated humanitarian aid structure, but the lack of participation by leaders of G20 countries dealt a blow to their expectations. Turkey is critical of the international community abstaining from earmarking larger budgets for aid, especially in humanitarian aid for Syrian refugees and Turkey, which is the country with the largest refugee population from war-torn Syria.

As Islamic charities strive for an international appeal to humanitarian aid efforts, rising Islamphobia in the West hampers their work and tarnishes the image of Muslims in general, according to experts. A plenary session on the second day of the forum entitled "Enhancing Public Relations and Media Capacities to Create Good News About Muslims" discussed the image of Muslims in the face of defamation campaigns. Organizers of the event say public relations plays a significant role in message dissemination, amplification and placement in major media, both traditional and digital, but Muslims have rarely used it to their advantage, while "others use PR techniques to defame Muslims and Islam."

Speaking at the plenary session, Meryem İlayda Atlas, a columnist for Daily Sabah, said Muslims in different countries need to engage in international dialogue, and slammed the Western view of Turkey and Muslims. "In Turkey, Muslims were subjected to decades of propaganda which praised the West and a rigid secular system. When Turkey tried to become an actor attending to its own affairs without outside intervention and shifted its focus a bit towards Muslim countries, it was criticized. It was criticized when it opposed the coup regime in Egypt and supported the deposed President Mohamed Morsi, or after the famous "one minute" incident at the World Economic Forum where President Erdoğan spoke out (against Israeli war crimes, addressing leader Shimon Peres). We live in a peaceful Muslim country, but still we hear the word "dictatorship" used to describe Turkey from the media, or on other platforms. The West ignores atrocities of dictators in other countries, but keeps describing the president of Turkey, a country that hosts 2.7 million refugees, as a dictator. We are still treated by Western media as 'an Islamist country' and witness a disturbing trend to name the presidency as 'Erdoğan's regime' in the manner of defining genuine dictatorships, conveniently ignoring the existence of democracy."

She said Muslims around the world should establish better relations and keep close contact to stand united against defamation.

The theme of this year's forum is "Resetting Priorities, Redefining Roles," and the organizers say they seek to build a new path for Muslim philanthropy, at a time of rising extremism and conflicts affecting especially youth, unemployment, distressing health indicators and a downward spiral of education, as well as "political conflicts being dressed with religious ideologies." In a statement, organizers said the 2016 forum would attempt to set new priorities to redefine the role of philanthropy, with a focus on the Muslim world in a radically changed global landscape.
RELATED TOPICS