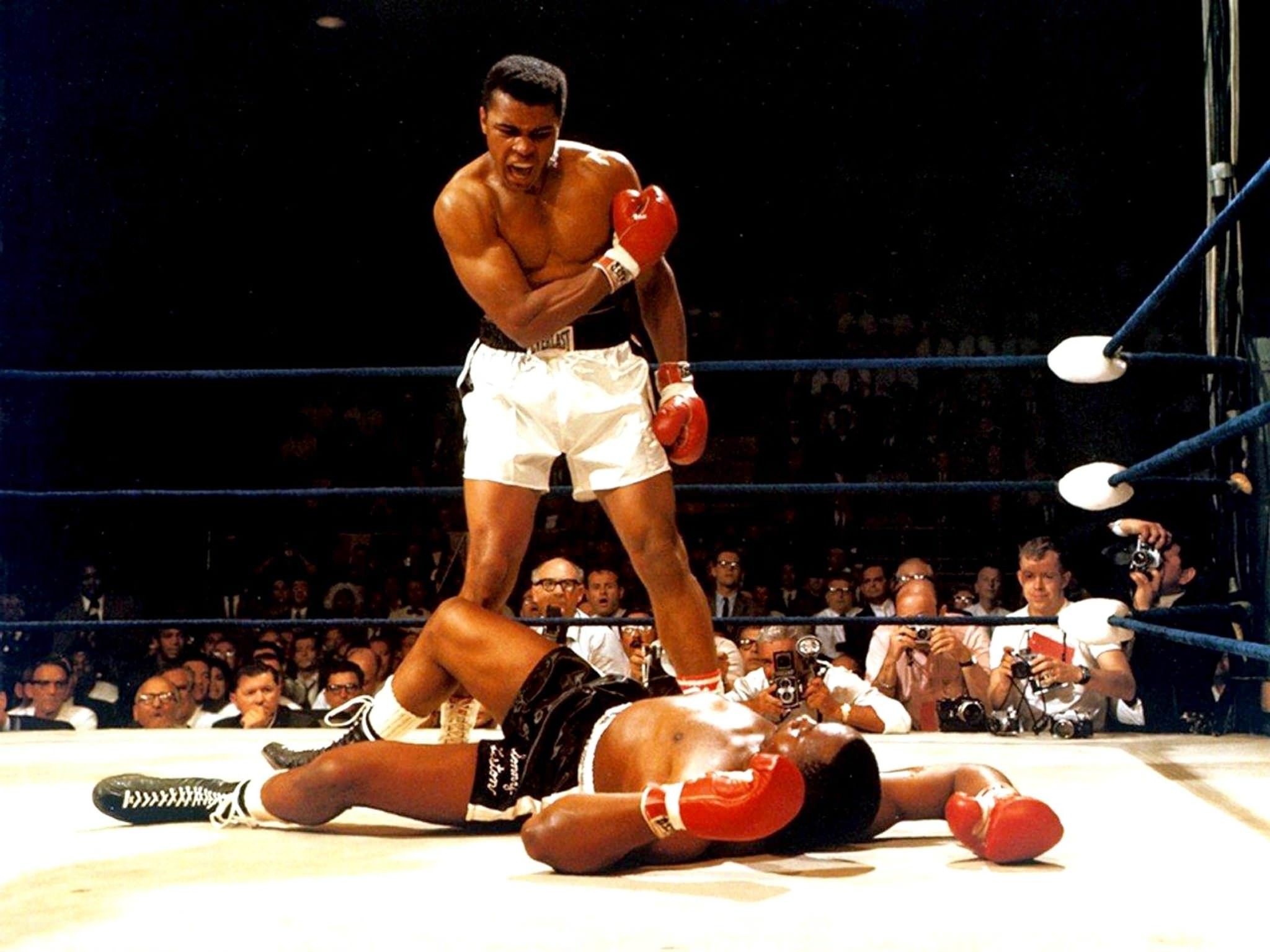 The death of boxing legend Muhammad Ali was greeted with widespread grief across Turkey, particularly among boxing figures and fans.

The former world heavyweight champion died Friday at the age of 74 in the U.S. city of Phoenix, Arizona, a family spokesman said. He was suffering from a respiratory illness complicated by Parkinson's disease.

President Recep Tayyip Erdoğan said in a tweet: "May Allah have mercy on Muhammad Ali, whose courage, conviction and determination inspired all of humanity."

"Ali, who passed away yesterday, was an extraordinary athlete and a remarkable man of good deeds who conquered the hearts of millions," Erdoğan also tweeted.

"This boxing legend's life-long struggle against racism and discrimination will never be forgotten," the president added.

Seyfullah Dumlupınar, coach of the Turkish boxing team, described the loss of the man widely recognized as the world's greatest boxer and one of its most influential sporting figures.

"Boxing lost its father and idol," Dumlupınar, 48, told Anadolu Agency. "Because of Ali, many people became boxers and Muslims."

Dumlupınar said he had been inundated with phone calls from friends and members of the boxing community grieving Ali's death.

"Ali was a legend," Eyüp Gözgeç, chairman of the Turkish Boxing Federation, said. "He had a unique style and profile, as well as an exemplary persona."

Gözgeç said Ali's death was a tragedy for Muslims as well as boxing fans.

Ali was known as Cassius Clay before he embraced Islam in the early 1960s with the Nation of Islam, which combined Islam with black political activism, before turning to Sunni Islam in 1975.

Greatest of all time

Cemal Kamacı, a prominent Turkish boxer whose career spanned roughly the same period as Ali's, said: "The world has not seen a boxer like him. He was a boxer who could knock out his opponent at any moment."

The 73-year-old, a former super lightweight who was the first Turkish boxer to win a European title, recalled meeting Ali in a gym during a trip to the U.S.

"When he learned that I was a Muslim he hugged me," Kamacı told Anadolu Agency.

Elsewhere in sport, Turkey and Barcelona footballer Arda Turan tweeted: "RIP the greatest of all time."

Hidayet Türkoğlu, a former basketball player and now an advisor to Turkey's president, said Ali conquered hearts and boxing rings while Deputy Prime Minister Numan Kurtulmuş paid tribute to Ali as "a world star as well as a strong voice for Muslims."

Turkish Foreign Minister Mevlüt Çavuşoğlu wrote in a tweet: "Muhammed Ali, who was a source of inspiration for thousands of people with his sports prowess and faith, has passed away. May he rest in paradise."

Turkey's former Prime Minister Ahmet Davutoğlu also sent a tweet on Muhammad Ali: "May Allah with His mercy embrace Muhammad Ali, defender of human rights, who fought not with his fists but with his mind and soul." Davutoğlu added that the current [racial] debates in the U.S. presidential elections show how important Muhammad Ali's legacy is.

Kemal Kılıçdaroğlu, leader of the main opposition Republican People's Party, highlighted Ali's stand against injustice and unfairness and many social media users commented on his opposition to the Vietnam War in spite of the damage it did to his early career.

His decision to refuse the draft led to Ali being stripped of his title and boxing license. He did not fight for four years.

Ali leaves behind his wife Lonnie, seven daughters and two sons and a legacy likely to remain unmatched in either the sporting or wider world.

Ali to be buried in Louisville after local hero's sendoff

Muhammad Ali's hometown of Louisville will honor the former boxing champion on Friday with a procession through the Kentucky city and public funeral at a sports arena, a tribute befitting a local hero who achieved global stature as a humanitarian. The public service for Ali, one of the most celebrated figures of the 20th century whose death brought accolades from around the world, will feature eulogies by former President Bill Clinton, broadcaster Bryant Gumbel and comedian Billy Crystal, family spokesman Bob Gunnell said on Saturday. The body of the former prize fighter, who died in Arizona after suffering for decades from Parkinson's syndrome, was expected to be returned within the next two days to Louisville, where flags were lowered at city hall in his honor.

During the Beatles' first visit to the United States in 1964, clever publicity agents arranged a meeting with Cassius Clay, then training for the bout that would make him heavyweight champion. The result was a memorable photo of a whooping Clay, who later changed his name to Muhammad Ali, standing astride four "knockout victims." They were two emerging cultural forces beginning their path to global fame. But as popular as the Beatles became, it was Ali who went on to become the most recognized person in the world. That picture was among the first to show him growing into that persona alongside the major cultural, political and entertainment figures of the era.

For a generation that came of age in the 1960s and 1970s, Ali was far more than a boxer. With a personality that could deftly dance and connect politics and entertainment, activism and athletics, his identity blended boundaries. He was an entertainer, a man at the center of swirling political and cultural change, a hero - and a villain - to many for his brash self-assuredness.

"Part of Muhammad's greatness was his ability to be different things to different people," retired basketball star Kareem Abdul-Jabbar wrote on Facebook Saturday.

"To sports fans he was an unparalleled champion of the world, faster and smarter than any heavyweight before. To athletes, he was a model of physical perfection and shrewd business acumen. To the anti-establishment youth of the 1960s, he was a defiant voice against the Vietnam War and the draft. To the Muslim community, he was a pious pioneer testing America's purported religious tolerance. To the African-American community, he was a black man who faced overwhelming bigotry the way he faced every opponent in the ring: fearlessly."

Ali inspired songs from around the world. John Lennon borrowed Ali's "I'm the Greatest" catchphrase for a song that he gave to Ringo Starr. The 1977 biopic "The Greatest" was soon forgotten, but not the theme song later immortalized by Whitney Houston, "The Greatest Love of All." Rappers Jay Z, Kanye West, Nas, Common and Will Smith referenced Ali in their lyrics.

Parkinson's disease quieted the man himself in his later years. The reception given to a halting Ali as he lit the Olympic torch in Atlanta in 1996 made it clear he had made the transition from a polarizing to beloved figure.

Ali remembered in Muslim world as champ, voice of change

Of all Muhammad Ali's travels in the Muslim world, his 1964 trip to Egypt was perhaps the most symbolic, a visit remembered mostly by an iconic photo of the boxing great happily shaking hands with a smiling Gamal Abdel-Nasser, Egypt's nationalist and popular president.

It was a mutually beneficial meeting: Nasser was viewed with suspicion and mistrust by the United States, but was revered across much of Africa and Asia for his support of movements fighting European colonial powers. For Ali, the new heavyweight boxing champion, being received by one of "imperialist" America's chief enemies announced his arrival on the global stage as a powerful voice of change.

The boxing genius and revolutionary political views of Ali, who died Friday at age 74, emerged when America's civil rights movement was in full swing and the Vietnam war raged on, sharply dividing Americans. In those years, the Muslim world was experiencing a post-colonial era defined by upheaval, with most developing nations taking sides in the Cold War, allying themselves to varying degrees with the United States or the Soviet Union.

His conversion to Islam won him the support of many across the region. Three years later, his refusal to serve in the U.S. Army in Vietnam - "I ain't got no quarrel with them Vietcong" - and his subsequent loss of the world title resonated with Muslims, many of whom saw that conflict as the epitome of America's global tyranny.

"Muslims wanted a hero to represent them, and Clay was the only Muslim champion... No other Muslim athlete managed to achieve what Clay did ... Thus, he was a symbol for Muslims," said Mohammed Omari, an Islamic law professor in northern Jordan's Al al-Bayt University.

In a Muslim world with a seemingly infinite number of people called "Mohammed Ali," the Louisville, Kentucky, native was mostly referred to as Muhammad Ali Clay - ironically retaining one of the "slave" names that he argued so hard and long for people to drop after he became a Muslim.

It was the diversity of the causes embraced by Ali during his lifetime - from the civil rights movement and anti-war activism to global charity work and dealing with Parkinson's disease - that has won him a large following among a wide range of admirers in the Muslim world. To them, he meant different things.

"The uplifting exuberance of Muhammad Ali will endure long after his passing, ensuring that the lasting political achievements of one of the 20th Century's greatest sports superstars will remain a vital part of the history of the turbulence that changed the world in the 1960s and 1970s," Dubai's Gulf News, a widely read daily in the United Arab Emirates, said in an editorial.