Red Crescent reaches out to the needy during Ramadan 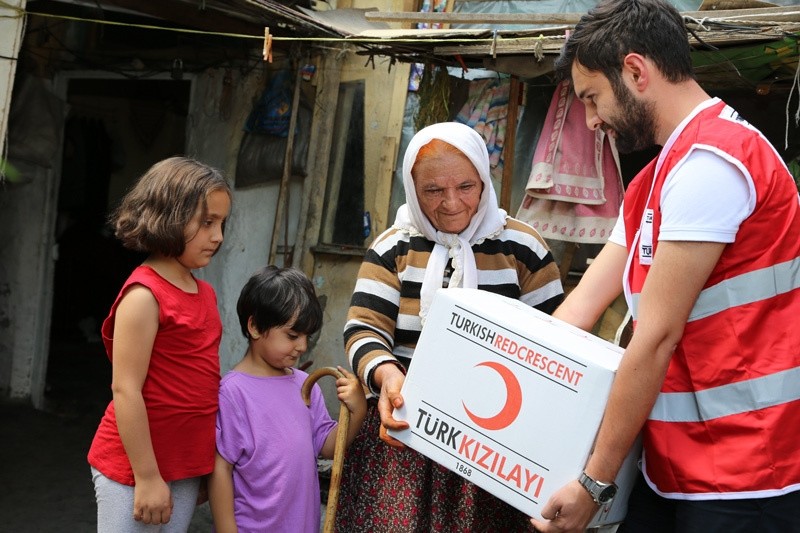 The Turkish Red Crescent announced that the charity will reach out to disadvantaged people abroad from Africa to Asia with humanitarian aid amounting to TL 2.5 million throughout the holy month of Ramadan

The Turkish Red Crescent, primarily known for its humanitarian aid campaigns in Turkey, is expanding the scope of its aid operations abroad during Ramadan, a time when the devout fast and help the poor.

The charity's president, Kerem Kınık, said they would distribute food aid worth TL 2.5 million ($860,000) during Ramadan, which started on Monday. He said the Red Crescent delivered 20,000 food packages containing rations for 100,000 people last year in Turkey and abroad, and they would deliver food aid to 500,000 people with 100,000 packages. "We will bring the prosperity of Ramadan to the homes of the needy, from Syria and Iraq to the Balkans and those living in Asian and African countries," he told Anadolu Agency (AA).

Kınık said they will deliver 15,000 food packages to the Gaza Strip, which is suffering from an Israeli blockade that restricts the entry of food and goods; 2,200 to Bangladesh; 1,700 to Iraq, 3,000 to Bosnia-Herzegovina and Serbia and 2,000 to Afghanistan. He said that their kitchen services and regular food aid to Somalia will also continue throughout Ramadan and a mobile kitchen serving 7,500 people daily in Somalia will remain open.

The Red Crescent has been instrumental in providing aid to natural and man-made disaster zones in 78 countries in the past decade and mainly offers accommodation and food aid to the needy around the world after disasters strike. It has stepped up its efforts in recent years for regular food and humanitarian aid for people displaced by conflict.

Turkey is home to more than 2.7 million Syrian refugees displaced by the ongoing civil war in their country. Kınık said they would continue sending aid to internally displaced people in Syria and those living in the country during Ramadan.

Ramadan is an Islamic month of giving, and the wealthy, local administrations and nongovernmental organizations in Muslim-majority countries often spearhead aid campaigns for the poor during the month. "Fitr "or "zakat al-fitr "is a lesser form of "zakat" – obligatory charity given to the poor by every Muslim who can afford it – on the holiday at the end of the month.

The Turkish Diyanet Foundation (TDV), a charity linked to the state-run religious authority, has also launched an aid campaign for Ramadan, including iftar meals and humanitarian aid to people in war-torn countries. The TDV will host iftar meals between June 5 and July 6. It will also hand out food to people in Syria as well as Rakhine, Myanmar. The charity is already involved in long-term aid projects in 135 countries and launched an aid campaign in 2012 for Syria where it set up a refugee camp for internally displaced people.

The İHH Humanitarian Aid Foundation, one of Turkey's largest charity organizations, launched the Feel the Brotherhood campaign for Ramadan aid and will deliver aid to 105 countries, with food and clothing aid going to orphanages around the world. The İHH announced that it will deliver 140,000 food packages to needy families around the world and set up mobile kitchens across Turkey for Ramadan.