Syrian refugees observe another Ramadan away from home 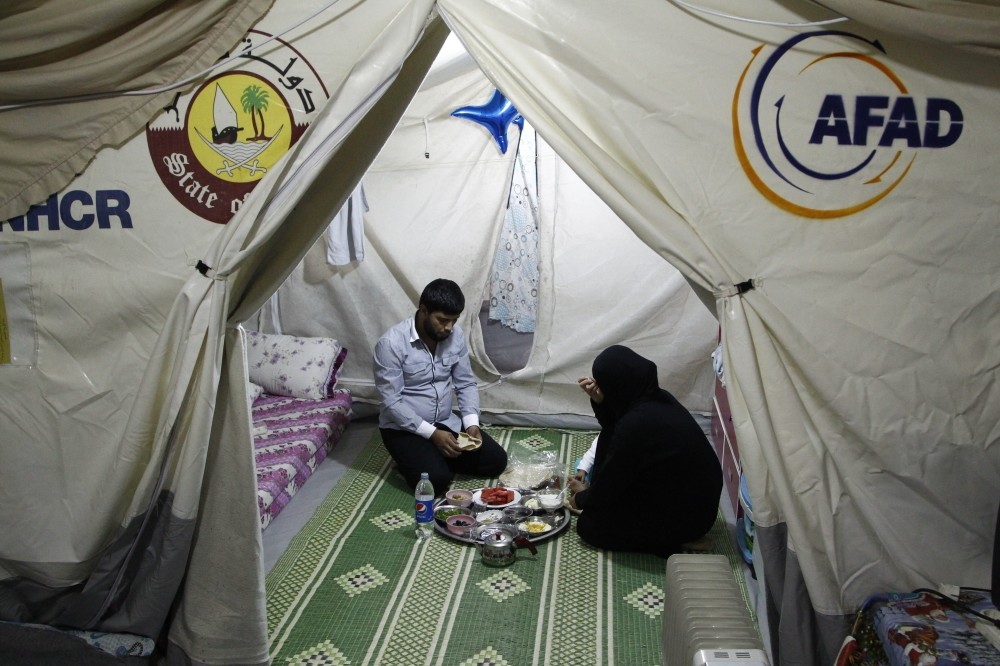 Syrian Muslim refugees in Turkey join hundreds of millions in observing the sacred month of Ramadan, during which they fast from dawn to dusk. For those in refugee camps just a few hundred kilometers from their war-torn homeland, it is a bittersweet occasion

Ramadan, a sacred month for Muslims, is yet another occasion for Syrian refugees in Turkey to remember their conflict-ridden homeland, while many live in refugee camps near border towns only a few kilometers away from Syria.

The Muslim fasting month of Ramadan, which symbolizes gratitude and patience, began as millions woke up Monday for their first sahur, the pre-dawn meal which Muslims eat before the day-long fast.

The scene was similar at the refugee camp in Dulkadiroğlu, Kahramanmaraş, a town located near Syrian-Turkish border. Most of the more than 18,000 refugees populating the tent camp gathered around large trays covered with olives, cheese, tomatoes and bread, spread on the carpeted floor of their tents for sahur.

For some Syrian refugees in Turkey, this is the fifth Ramadan in Turkey.

Khidr Yetim, a father of two, looks forward to marking the month in Syria. He is grateful to Turkey and the people for "taking care of Syrians. I hope this Ramadan will bring an end to the war and we return [sic] our home," he told Anadolu Agency (AA). Mirza Ammari will spend his fourth Ramadan in Turkey with his wife and eight children. For him, the only downside of Ramadan is having to mark it away from his homeland. "I feel myself at home here in Turkey, but still I feel separated from my country. I wish returning [sic] to Syria with my family. May Allah bless Muslims with peace this Ramadan," he prays. Fatma Kaddur, a woman living in the camp, joins prayers to return home. "We pray day and night to return to Syria," she tells AA.

Turkey is home to more than 2.7 million Syrians and a small fraction of them - slightly over 259,000 according to the latest figures - live in 26 refugee camps in cities near the border. These camps have been praised by the international community, as they stand out from similar sites for refugees in other countries, offering services ranging from modern grocery stores to clinics, as well as housing units.

As the majority of their residents are Muslim, the camps also offer everything they may need in Ramadan, including large mosques for tarawih, the voluntary night time prayer performed in Ramadan, during which the effort is made to recite the entire Quran in the 30 days. Instead of supplying basic food aid to residents, authorities deliver food vouchers to use to shop at stores at their own convenience.

For those refugees outside the refugee camps and internally displaced persons in Syria, Turkish charities have launched multiple aid campaigns. The Diyanet Foundation, a charity linked to country's state-run Presidency of Religious Affairs (DİB), set up a tent camp in Azaz, a town in Syria's Aleppo, for more than 4,000 people, which supplies food, including daily meals and basic amenities to the displaced.

This Ramadan will take a particularly heavy toll on Muslim refugees, as they see their country at war between the Assad regime and rebels, while both DAESH and Syrian Kurdish factions are amassing territory. Syria's northern regions close to the Turkish border in particular suffer from lack of food, and the United Nations has repeatedly appealed to the Assad regime to allow humanitarian aid access to besieged areas. Nonetheless, aid access remains limited with no end in sight for the civil war. The Syrian regime has been unresponsive to an international plan to start aid delivery on June 1.
RELATED TOPICS