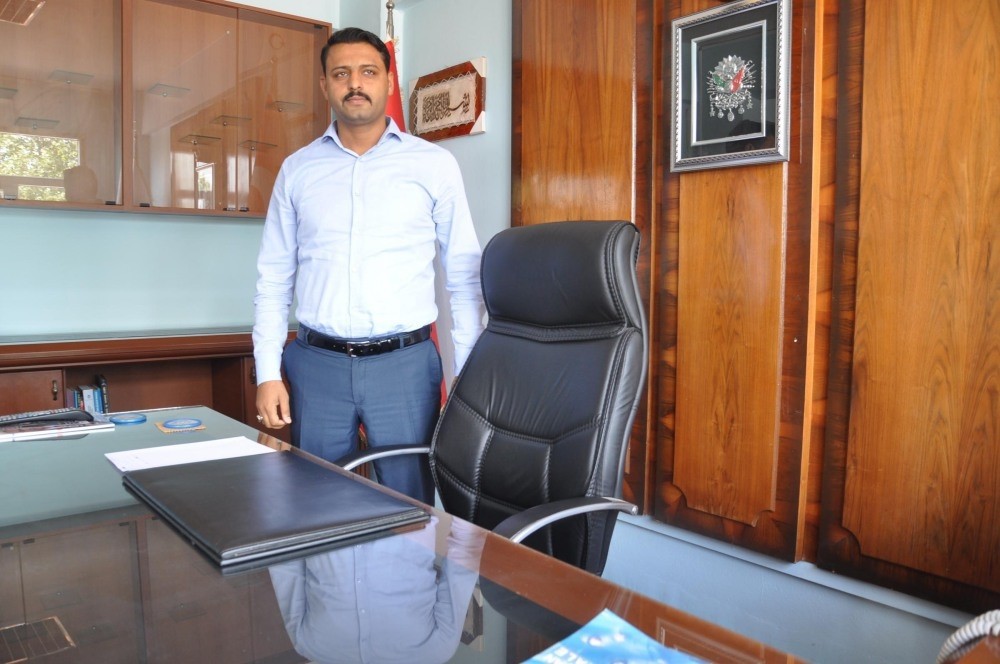 Hu00fcseyin Erkan poses with the u201ccursedu201d chair he will occupy as a councilman. The politician does not believe in the curse that supposedly claimed the lives of his five predecessors.
by Compiled from Wire Services
Jun 09, 2016 12:00 am
The death of Cevdet Şentürk on Monday would not go beyond the headlines of local media in Aydın, a western Turkish province. However, the fate of previous holders of his office since 1994 gave rise to rumors again of the "cursed" chair of the mayor in the province's Acarlar neighborhood. Şentürk was a councilman in İncirliova where Acarlar is located and was recently appointed as a coordinator for the place demoted to neighborhood from the status of "belde" or small town in 2014.

Neighborhood residents would not believe the mayor's seat was "cursed" up until the five deaths in the office. Durmuş Ali Akçan was the first casualty when he died one week after he was elected mayor. Yunus Şentürk followed him. The mayor who secured three terms in office died of cancer in 2012 at the age of 71. Adnan Yıldız from the ruling Justice and Development Party (AK Party) replaced him but he succumbed to a heart attack only seven months after his election. Town council members proceeded to elect Celal Kaymak, 60, from the opposition Republican People's Party (CHP), only to see him too die of a heart attack eight days later. Cafer Yıldırım from the AK Party succeeded him but he died while he was in office at the age of 57, again, from a heart attack.

After Yıldırım's death, the town council decided to put the leather chair of the mayor up for sale. The chair was replaced with another one and Aşkın Şimşek has become the last mayor to survive duty before Acarlar was converted into a neighborhood under a new law affecting hundreds of small towns across the country. The mayor's office was kept in the neighborhood, though there was no official mayoralty and Cevdet Şentürk used the place for his job as coordinator until his death.

Locals have found it difficult to comprehend what caused the deaths in office as the office of mayor was not a stressful job, running a place with roughly a population of 10,000 people.

Hüseyin Erkan replaces Şentürk as the new councilman representing the neighborhood. The 30-year-old councilman is not scared by the fate of his predecessors. He does not believe the chair is "cursed" and pointed out that all the deaths were of natural causes. "This is a divine matter. If I die here, it would be a martyrdom for me as people serving the public can be counted as martyrs if they die while doing that," the politician from the far-right Nationalist Movement Party (MHP) says.