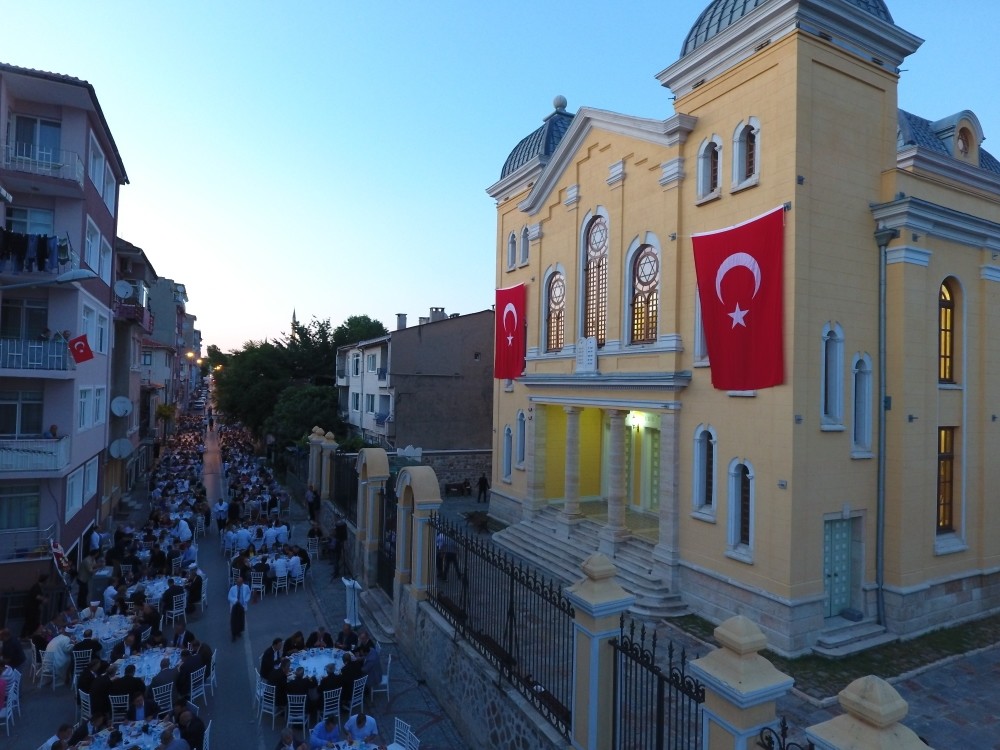 Great Edirne Synagogue brought together Muslims, Jews and Christians together for the interfaith event. (AA Photo)
by Daily Sabah Jun 11, 2016 12:00 am

Against the backdrop of a restored synagogue in the northwestern city of Edirne, the country's Jewish community hosted hundreds of locals and Muslim clerics for an iftar (fast-breaking) dinner, more than 80 years after they were forced to flee the city

Edirne, a city on Turkey's European border, on Thursday hosted an outdoor iftar (fast-breaking meal) for the Muslim faithful observing the fasting month of Ramadan. What distinguished this event from other outdoor iftars was its host and location. The Turkish Jewish community, whose members were forced to leave the city in the1930s during the infamous Trakya incidents, held a banquet for Edirne Muslims outside the Great Edirne Synagogue. The synagogue, restored by the government and opened last year, has revived Jewish culture in the city, where only one Jewish family lives, hosting frequent visits from community members from other cities and a lavish wedding last month, the first in decades.

The iftar on Thursday evening was an occasion to promote interfaith dialogue with the Christian community, represented by Rev. Alexander Çıkrık of the Sveti Georgi Bulgarian Orthodox Church who was also in attendance at the event.

Chief Rabbi İsak Haleva, İbrahim Şerif, a Muslim mufti from Komotini, Greece, neighboring Edirne, Çıkrık and Edirne Mufti Emrullah Üzüm raised their hands together as Muslims did when Üzüm accompanied Jewish chazzan Nesim Beruhiel in the recitation of Muslim and Jewish prayers prior to the dinner. Other high-profile guests at the dinner included the Edirne governor and mayor, lawmakers from the ruling party and the opposition including Justice and Development Party (AK Party) lawmaker and Parliament's human rights committee head Mustafa Yeneroğlu and Turkish Jewish community leader İshak İbrahimzadeh. 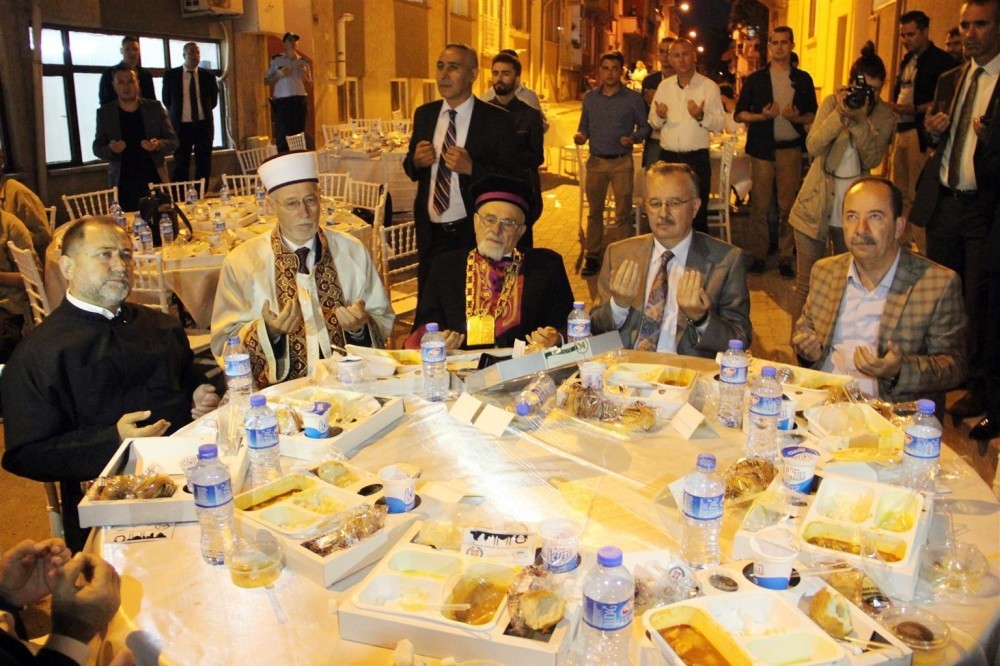 Hundreds of people sat around tables placed on the street in front of the synagogue, which was adorned with Turkish flags for the event and posters reading "Brotherhood On The Street." The faithful broke their fast as a Muslim cleric recited the adhan, the Muslim call to prayer, which marked the end of daily fasting, from a pulpit on the street.

Speaking to reporters before the dinner, İsak Haleva said Ramadan was a glorious gift from God for the people, "a sacred month."

President Recep Tayyip Erdoğan also sent a message to the dinner organizers and his message, underlining the peaceful coexistence of the peoples in Turkey, was read out at the event.

Haleva said the Jewish community in Turkey lived comfortably and in peace and "this magnificent synagogue is a symbol of this." The synagogue, also known as Kal Kadoş ha Gadol, was built in 1905 upon orders from Ottoman Sultan Abdülhamid II to replace 13 separate synagogues destroyed by a fire that devastated the city. The building was designed by French architect France Depre and opened in 1907 to serve as a house of worship until 1983, by which time the city's Jewish community had dwindled to almost zero. A sizeable Jewish population lived in Edirne up until 1934, the year when the Trakya (the name of the region where Edirne is located) riots erupted. The community faced rampant discrimination after an anti-Semitic campaign fueled by ultranationalist columnists and attacks on Jewish-run shops and looting of houses forced Jews to flee en masse to Istanbul and other cities. Ankara ordered a comprehensive restoration of the site and the synagogue was reopened last year after restoration work that saw its lead domes and splendid interior as well as Torah scrolls restored to their former glory. 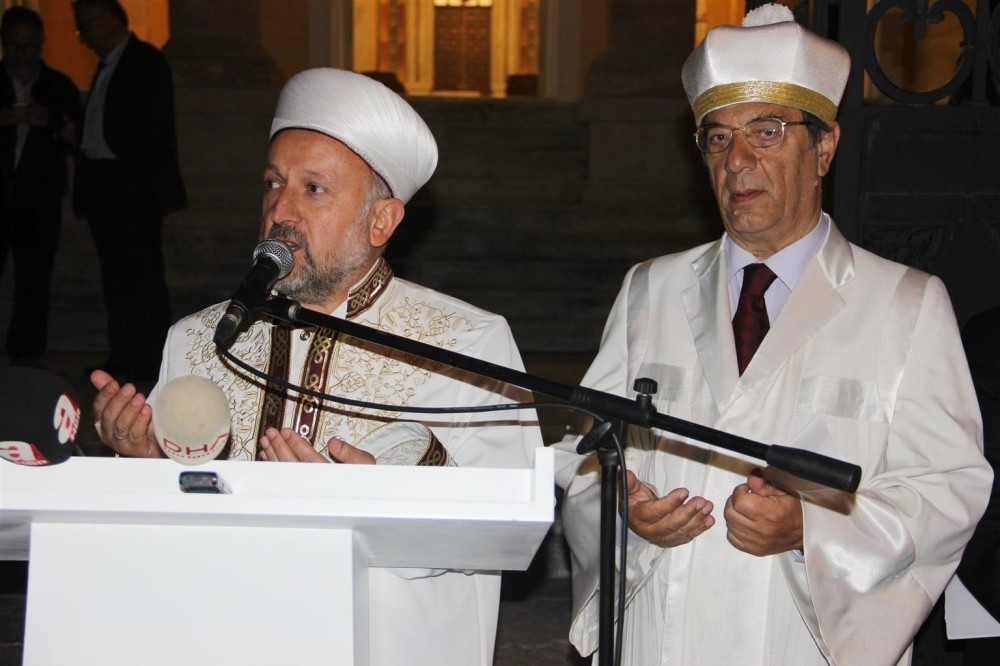 The chief rabbi, whose parents hail from Edirne, said the city has been one of the finest examples of the multi-cultural society in the Ottoman era when it once served as the empire's capital. "It has been an exceptional place for existing together in peace and this synagogue and other historical structures showcase this legacy. Sharing our bread together in this iftar is perhaps the best example of how the coexistence fares well today," he said.

Authorities plan to do more to further revive the Jewish presence in the city. The city's mayor Recep Gürkan said at the dinner that the municipality would buy three old houses once owned by Jewish families and restore them with the assistance of the Jewish community, adding that houses would serve as museums.

Mustafa Yeneroğlu said the iftar was the "embodiment of the repeating of history" and that the Turkish Jewish community is a main element pf the Turkish nation regardless of the "policies of other countries." He emphasized that Turkey would continue its fight against anti-Semitism. "Our struggle against the hatred, hate speech and hostility toward a community will not cease as we have an approach that sees different communities as elements enriching these lands," he said.
RELATED TOPICS