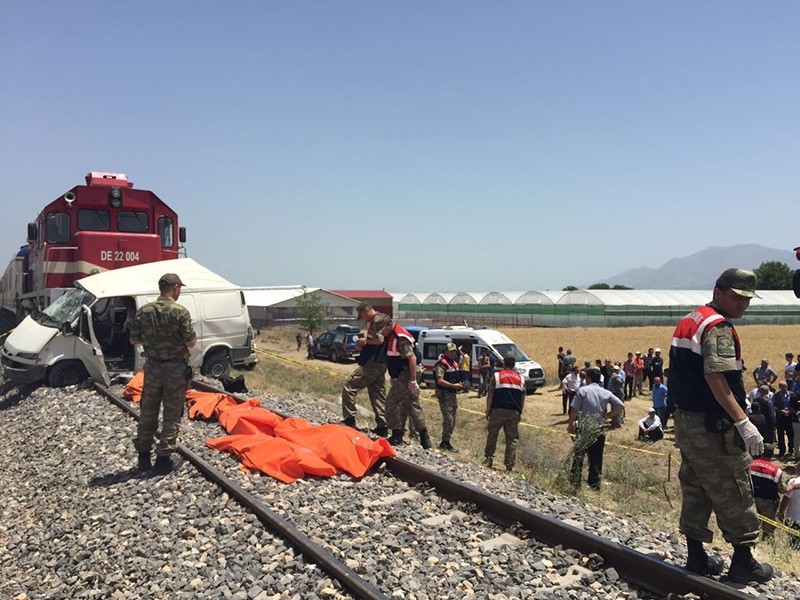 Nine people were killed and one was injured when a minibus carrying farm workers crashed into a train in eastern Turkey on Monday in the first major accident involving temporary workers this summer season, when such accidents are common due to neglect for safety.

The deadly accident in eastern Turkey raises concerns on travel safety at a peak time for farm workers to travel across the country in search of temporary jobs.

The minibus carrying the workers, including Syrian nationals, crashed into the train as it was trying to cross a level crossing in the eastern city of Elazığ on Monday morning, as workers in the town had jobs in nearby greenhouses. Media outlets reported that there were no visible signs for the level crossing when a passenger train crashed into the minibus on the crossing and dragged it some 400 meters. The impact of the accident ejected three passengers from the minibus. The bodies of two passengers were found near the scene, while the third survived. Paramedics who rushed to the scene recovered five bodies from the mangled debris of the minibus. Two others succumbed to their injuries at hospital and another passenger was heavily injured.

Authorities said four of the victims were Syrian refugees living in Elazığ who had joined Turkish workers to work at greenhouses for a temporary job in the summer.

It is the deadliest accident involving farm workers since 15 were killed in July 2015 in western Turkey, when a truck collided with the pickup truck the workers were travelling in with blatant disregard for the safe transportation of workers. It was preceded with another accident that killed 17 farm workers in the province of Isparta in October 2015.

Although traffic accidents are seemingly on the decline, they still claim over 3,000 lives yearly. Along with the lack of inspections, reckless driving is the major cause of accidents, and both motorists and pedestrians often violate traffic rules.

Experts are calling for more frequent inspections of drivers and vehicles by security forces and the implementation of new regulations.