Turkey most generous country in the world for humanitarian aid 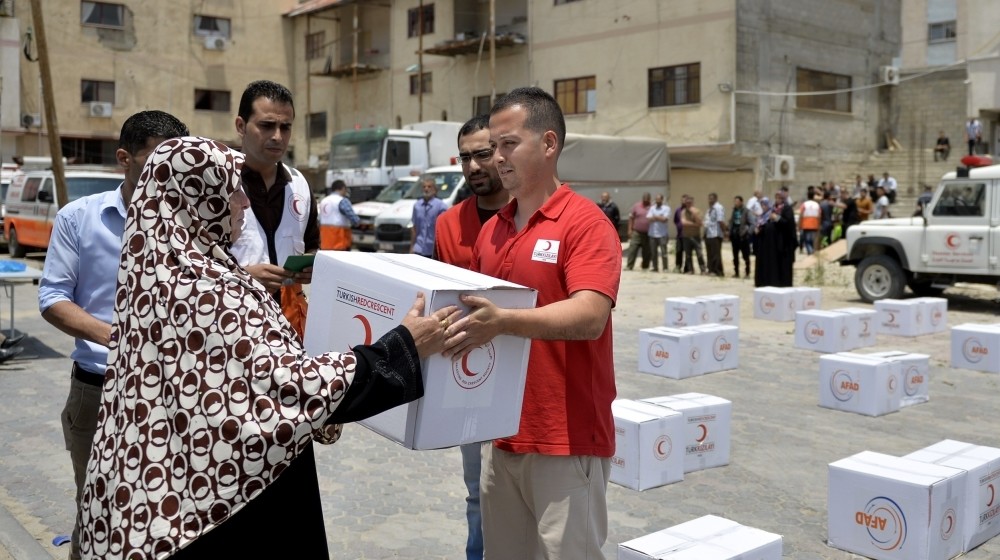 Turkish Red Crescent officials deliver aid to Palestinian families in Gaza.
by daily sabah
Jun 28, 2016 12:00 am
Development Initiatives, a U.K.-based platform monitoring humanitarian aid across the world, released a report on Monday announcing Turkey as the country that gives most to people in need compared to its gross national income. The Global Humanitarian Assistance Report also shows Turkey's assistance to Syrian refugees on its own territory made it the donor contributing the second largest amount last year, while the United States contributed most to the international humanitarian aid by government donors by giving almost one-third of all international humanitarian assistance among them. The United Kingdom and other countries in Europe follow the two as top donors in 2015.

Turkey's humanitarian assistance reached $3.2 billion from $1.6 billion in 2014 and the country's increased international aid efforts granted it the third place for the third consecutive year starting in 2013 in the Global Humanitarian Assistance Report. Turkey gave the most humanitarian assistance as a percentage of gross national income at 0.37 percent the report shows, and it was followed by Kuwait and United Arab Emirates at 0.33 and 0.25 percent respectively.

Although it is struggling for economic growth while trying to join the league of developed countries after recovering from years of economic mismanagement, Turkey is determined to earmark more for humanitarian aid. Under the Justice and Development Party (AK Party) governments, humanitarian assistance efforts gained momentum and the country's aid agencies rose to prominence for aid in disasters and assistance to refugees. The country's efforts allowed it to host the World Humanitarian Summit, a first-of-its-kind summit by the United Nations to coordinate humanitarian efforts. International aid remains vital in a world, where 65 million people are displaced by conflicts, and nearly 220 million people are affected every year by natural disasters.

According to the report, most international humanitarian assistance last year was for Syria, which is gripped by an ongoing civil war stating $2 billion was spent for Syria, followed by South Sudan at $1.5 billion, and Iraq and Palestinian territories at $1.1 billion.

Since the uprising against the Bashar Assad regime in Syria evolved into an all-out civil war, Turkey has embraced an open-door policy for those fleeing the brutal conflict. Official figures put the number of Syrians in Turkey at slightly over 2.7 million but experts say their number, when those not registered with the authorities are added, might be 3 million in total. Syria remains a main concern for the international community due to the high number of refugees fleeing into neighboring countries and from there, to Europe. Turkey boasts spending more for Syrians than the rest of the world and being a country with the largest number of Syrian refugees. It also repeatedly calls on the West to help establish "a safe zone" within Syria to curb the flow of refugees and further steps to end the conflict and rising threat of DAESH based in Syria.

The Turkish Red Crescent, the state-run Cooperation and Development Agency (TİKA) and the Disaster and Emergency Management Authority (AFAD) spearhead Turkey's aid efforts both within the country and in more than 140 countries. In line with Ankara's humanitarian diplomacy, TİKA quadrupled development aid from $85 million in 2002 to $3.59 billion in 2014 and will further boost it. AFAD, an agency previously focused on natural disasters, improved its services for refugees and now runs refugee camps for Syrians and is praised for their facilities. The Turkish Red Crescent, which mainly operates within Turkey, recently expanded its aid efforts to countries such as Pakistan, Chad, Haiti, Libya, Somalia, Myanmar, Palestinian territories, Mauritania, Senegal, Niger, Bosnia and Herzegovina and many others, providing shelters, food aid, medicine etc. to people affected by disasters and conflicts.