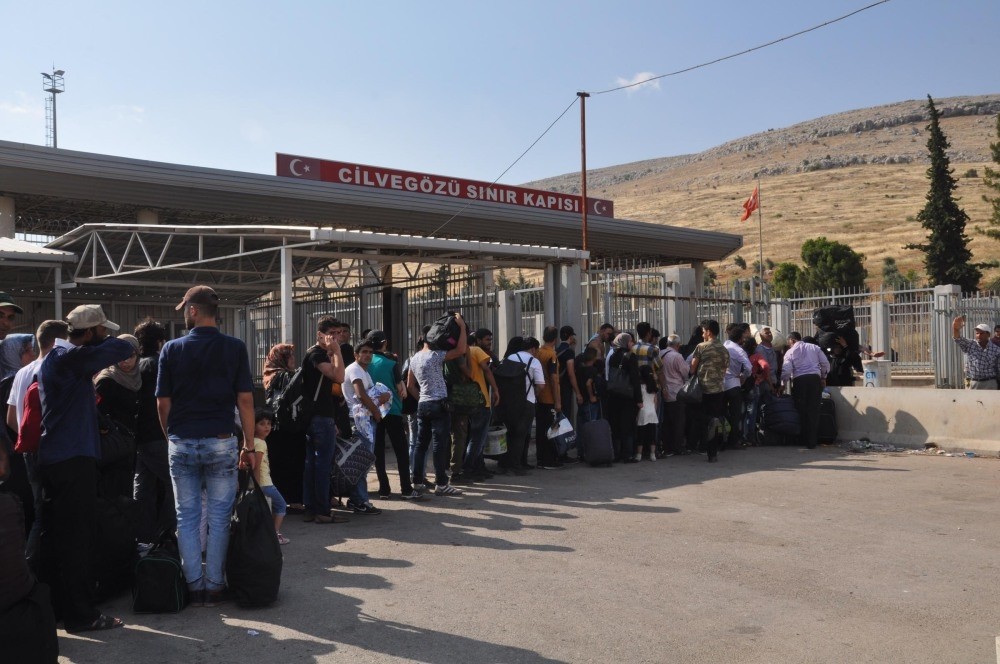 Syrians flocked to the Cilvegu00f6zu00fc border crossing on Thursday.
by Daily Sabah Jul 01, 2016 12:00 am
Turkey's tightly sealed border with war-torn Syria was opened so that Syrian refugees in the country could return to their families in Syria to spend the upcoming Muslim festival of Eid al-Fitr.

Some 4,000 Syrians flocked yesterday to the Cilvegözü border crossing, the only crossing through which Syrian refugees were allowed to return to Syria. Most returning refugees were families, including elderly people and children. Early on Thursday morning, they streamed into the border gate surrounding by gendarmerie troops. They were allowed to leave after they showed their "foreigner card," issued to foreign citizens staying in Turkey as refugees.

The border crossing, near the southern city of Hatay, is located across from the Bab al-Hawa crossing north of Aleppo in Syria. With the exception of merchants and the injured, no one is allowed into Turkey from the Syrian side of the border, although Syrians desiring to return home are allowed to cross into Syria.

Syrian nationals with a valid passport who have registered with a state-run agency for refugees will sign an agreement with authorities before leaving. The border will open on June 30 and will close at 5 p.m. on July 5, the first day of the three-day Eid al-Fitr, which marks the end of the fasting month of Ramadan for Muslims. Syrians who signed an agreement with the authorities before leaving will be obliged to return to Turkey on July 8, and those who return after the deadline will be barred from re-entry into Turkey.

Border crossings with Syria are occasionally opened to allow refugees from the war-torn country to return home. Last year, 13,000 Syrians traveled home during Eid al-Fitr and another 28,000 traveled on Kurban Bayramı (Feast of Sacrifice), the Islamic holiday marking the end of the Hajj pilgrimage.

Turkey shares a lengthy border with Syria and hosts more than 2.7 million Syrian refugees, the largest number among the countries in the region that have taken in refugees. It remains a safe haven for the displaced Syrians, although the constant threat of violence spilling over the border has forced Ankara to keep the crossings closed. Turkey is a staunch advocate of the establishment of a "safe zone" inside Syria for the internally displaced, which would prevent attacks on them by the Assad regime and DAESH terrorist organization, among others.

The Cilvegözü border crossing was the scene of a car bombing in 2013 that killed 13 people.

Zuwair Salim accompanied his family at the border, and told Anadolu Agency that they would visit their parents in Idlib. Hassan Mahmoud said he had not been able visit his relatives in Idlib during the two years since he took shelter in Turkey. Speaking to Doğan News Agency, Mahmoud said he would stay in Syria until the deadline. Ibrahim Gannum, a student in a Turkish university, said he missed his mother and siblings since he was not able to visit Syria last year.
RELATED TOPICS