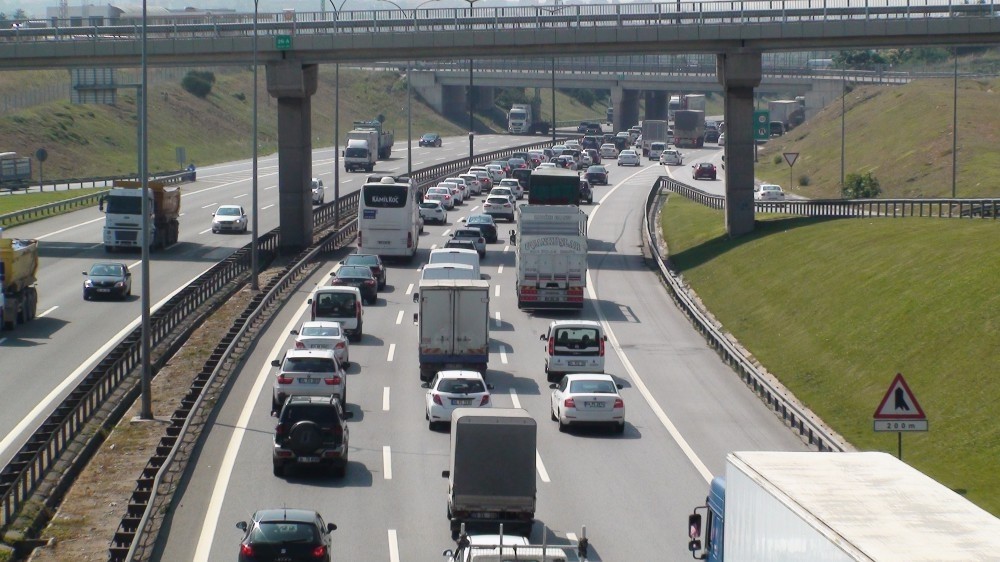 Roads leading out of Istanbul were busy on Friday morning as holidaymakers hit the road early ahead of eid.
by Daily Sabah Jul 02, 2016 12:00 am

As Turkey counts down to Eid al-Fitr next week, travelers took to the roads starting Friday for the week-long holiday, causing traffic jams particularly in big cities

Hitting the roads to spend the three days of the Eid al-Fitr religious holiday with family proved to be an ordeal once again for motorists and passengers alike as traffic frustrated thousands for hours. Eid al-Fitr will start on Tuesday and marks the end of Ramadan and a month of fasting for Muslims. For the three-day festival, the government has declared days off over the next week for civil servants. People adding their annual leave to the holiday secured almost a week of vacation, and began heading to vacation resorts or their hometowns for eid starting on Friday.

Traffic came to a halt on main roads on Friday, especially in Istanbul and other large western cities, which contains a huge migrant population from the country's other cities and regions. Istanbul's Fatih Sultan Mehmet Bridge connecting the two sides of the city was clogged from the early hours of Friday with the traffic flow to the east of the city considerably slowing down.

A section of the Trans-European Motorway (TEM) in the northern Turkish city of Bolu was the scene of massive congestion yesterday. The section that connects the country's west to eastern and central Turkey saw thousands of cars occasionally stuck in frustrating traffic. Vehicles sometimes advanced at a snail's pace but disruptions to fast traffic flow remained relatively minor.

Congestion will come to an end before eid, but another wave of traffic jams in Istanbul is anticipated next Sunday when holiday goers make the journey to return home. The TEM highway, already a busy and dangerous route heavily used by trucks, will see an increase in traffic that day, experts warn. The highway spans the northern cities of Turkey, Istanbul and cities in the northwest. Traffic police squads will be deployed along the highway to prevent accidents and will conduct random inspections to enforce traffic rules in a country where road safety violations kill thousands every year. The 23-kilometer section of the highway in the city of Bolu where the traffic reaches its peak is being monitored with 87 cameras for immediate response to anything blocking the vehicles, such as accidents or broken down cars. Road maintenance crews will also be on duty around the clock during eid. The road, which normally receives a traffic volume of some 28,700 vehicles daily, will see the crossing of up to 500,000 vehicles during the days before and after the eid holiday.

Travelers spend their vacation either in vacation resorts in southern Turkey or visit their parents or children living in other cities during Eid al-Fitr. Though most Turks, especially middle-class households prefer to spend their vacation with parents or children in other cities, the tourism sector, which was affected by a shortage of tourists after terror attacks in the southeast and strained ties with Russia this season, hopes that holidaymakers will help a boost in declining revenues. Experts warned drivers to be patient and attentive so as to not cause accidents. According to statistics, most accidents occur during a trip's early hours or once travelers near their destination. Experts list a number of measures for drivers to avoid accidents and minimize the damage accidents inflict. Measures include wearing comfortable clothes, undertaking thorough maintenance of vehicles before traveling and avoiding carrying heavy suitcases on board vehicles. Experts also urge motorists to take a 30-minute break every three hours while on long trips and warn against driving while drowsy.
RELATED TOPICS