Traffic controls increase in Turkey as Ramadan Bayram kicks off 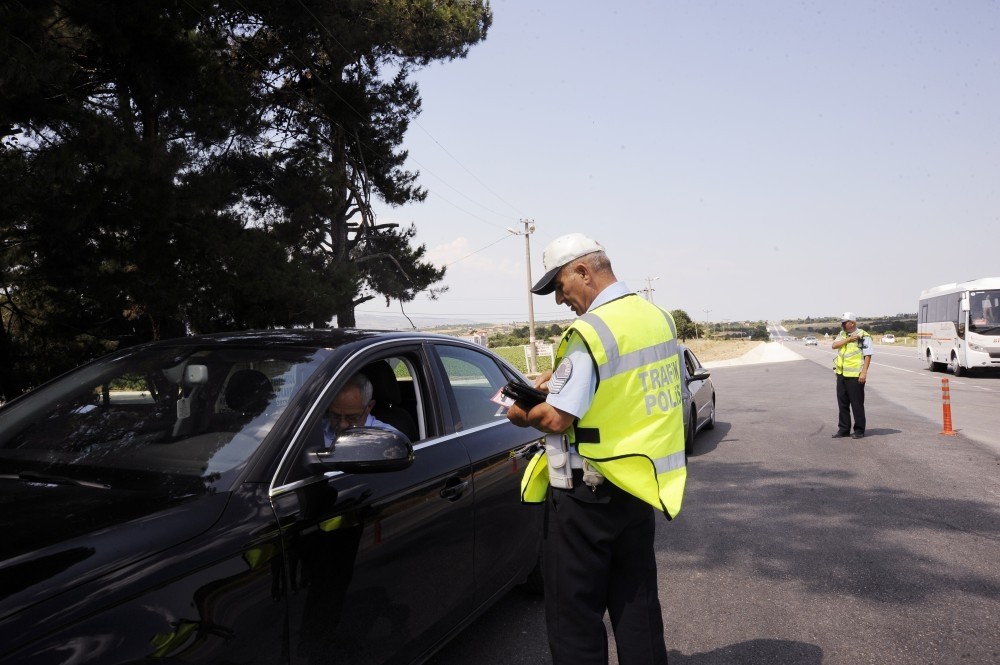 An officer checks the papers of a driver on a road in u00c7anakkale. The route is popular among holidaymakers from big cities in the west and often sees serious accidents.
by daily sabah Jul 05, 2016 12:00 am

A nine-day holiday began for millions over the weekend on the occasion of Ramadan Bayram, also known as Eid al-Fitr, the holiday marking the end of the fasting month of Ramadan. The holiday means a massive exodus, mainly from the country's west to southern, northern and central areas and with the exodus, comes inevitable accidents claiming hundreds of lives every year. To ensure road safety, the Interior Ministry announced comprehensive measures. Minister Efkan Ala said they would deploy 29,000 policemen on the roads throughout the holiday and a traffic police squad would be stationed every 10 kilometers on busy routes.

Police helicopters will also patrol the 18 main highways while speed radars on the roads will be increased, along with extra security cameras to detect those violating road safety.

Ala said they also posted plain clothed traffic police officers in inter-city buses, a popular means of transportation for millions during the holiday to detect the bus drivers ignoring safety rules.

Risky locations where traffic accidents occur most according to statistics will be under the spotlight during the holiday. More than 10 people have already been killed in collisions across the country as of Monday. Heavily used roads, such as the ones between the cities of Kocaeli and Istanbul along with Kırıkkale and Ankara, two busy routes in western and central Turkey, will be monitored by additional traffic teams and the roads will be opened by adding extra lanes if necessary. Emergency vehicles will be on standby to respond to accidents.

The traffic teams will also ask drivers on long journeys to step out of the car and get some rest. In some cities, police officers offer free tea to long-distance drivers as refreshment and order a mandatory break for at least 15 minutes to shake off the fatigue. The teams aim to use this time to check the papers of the drivers as well as the cars and help drivers be more active and increase their blood flow.

Traffic teams will also concentrate on the control of minibuses and buses. The teams will also investigate whether transportation vehicles are roadworthy. Passengers who do not wear seatbelts will be warned and informed about the importance of wearing a seatbelt while traveling.

Larger trucks will be prevented from traveling when there is heavy traffic. They will be asked to pull over and wait until the roads are relatively empty.

City Security Management Systems (KGYS) and Electronic Traffic Control Systems (TEDES) will be used actively throughout the bayram holiday to avoid any traffic accidents and loss of life. Moreover, the roads that lead to memorials and monuments that will be visited by great amounts of people during the bayram holiday will be monitored at all times.

Nationwide holidays in Turkey are usually marred by a spike in the number of road deaths despite prominent warnings from the authorities about the dangers of reckless driving. Last year, nearly 70 people died on Turkey's roads during the Ramazan Bayramı holiday.

Experts list a number of measures for drivers to avoid accidents and minimize the damage accidents inflict. Measures include wearing comfortable clothes, undertaking thorough maintenance of vehicles before traveling and avoiding carrying heavy suitcases on board vehicles. Experts also urge motorists to take a 30-minute break every three hours while on long trips and warn against driving while drowsy.
RELATED TOPICS