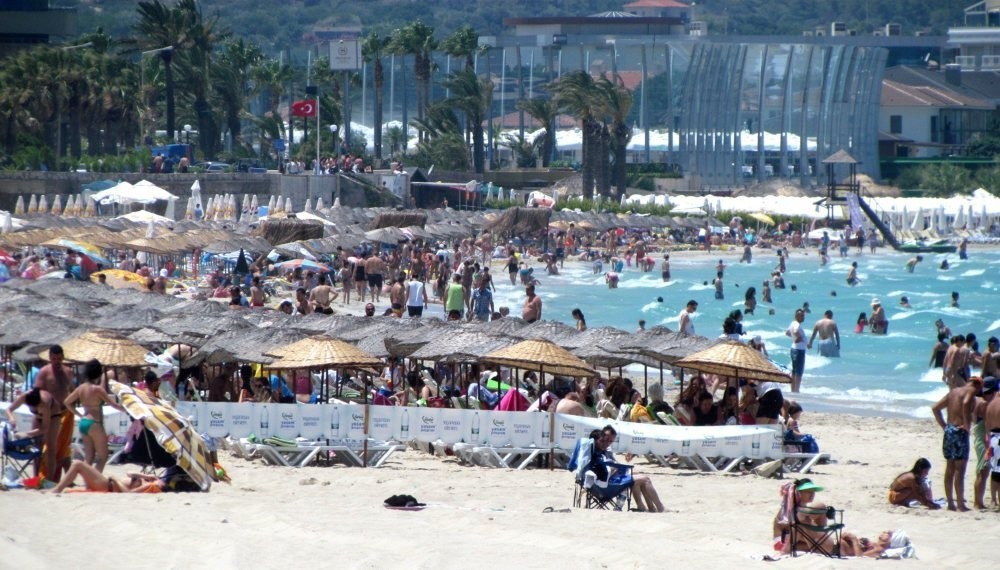 The town of u00c7eu015fme in the west was flooded by holidaymakers during Bayram. (IHA Photo)
by Daily Sabah Jul 08, 2016 12:00 am
Amid a slump in revenues, the tourism sector celebrated Ramadan Bayram or the Eid al-Fitr holiday as the unbearable temperatures and week-long holiday drove thousands to the country's western and southern beaches.

Even on the third day of bayram, holidaymakers clogged the roads leading to popular vacation spots and Istanbul, though relatively empty due to the mass exodus of holidaymakers, was home to overcrowded beaches.

Bayram began on Tuesday but an extra day off on Friday for the public sector extended the holiday to nine days as it combined with two weekends. This gave people more than enough time to escape the hubbub of the big cities and go to holiday resorts in the Aegean and Mediterranean regions.

Çeşme, one of the most popular spots for Turkish holidaymakers in the city of İzmir in the west, was bursting with tourists from all across the country and hotel vacancy rates dropped to zero, media outlets reported. Although the holiday season kicked off early in the small town on the shore of the Aegean Sea, tourist numbers significantly dropped late spring and early summer due to the lower number of foreign tourists amid security concerns and the fasting month of Ramadan. The tourism sector hopes to recover their losses over the bayram holiday. Though businesses were cheering the newfound revenues, the holiday travel frustrated motorists as traffic jams clogged all the roads to the town.

Similarly, Marmaris in the southwestern province of Muğla, a popular resort especially among European tourists, saw a mass arrival of local tourists for the holiday. With hotels fully booked, hundreds of tourists spent nights on the pristine beaches in the town, sleeping on lounge chairs and in tents. "We couldn't even find lodging in Marmaris, let alone a proper hotel. So we had to buy a tent and stay on the beach," Gökhan Aydın, a tourist from İzmir, told Anadolu Agency.
RELATED TOPICS