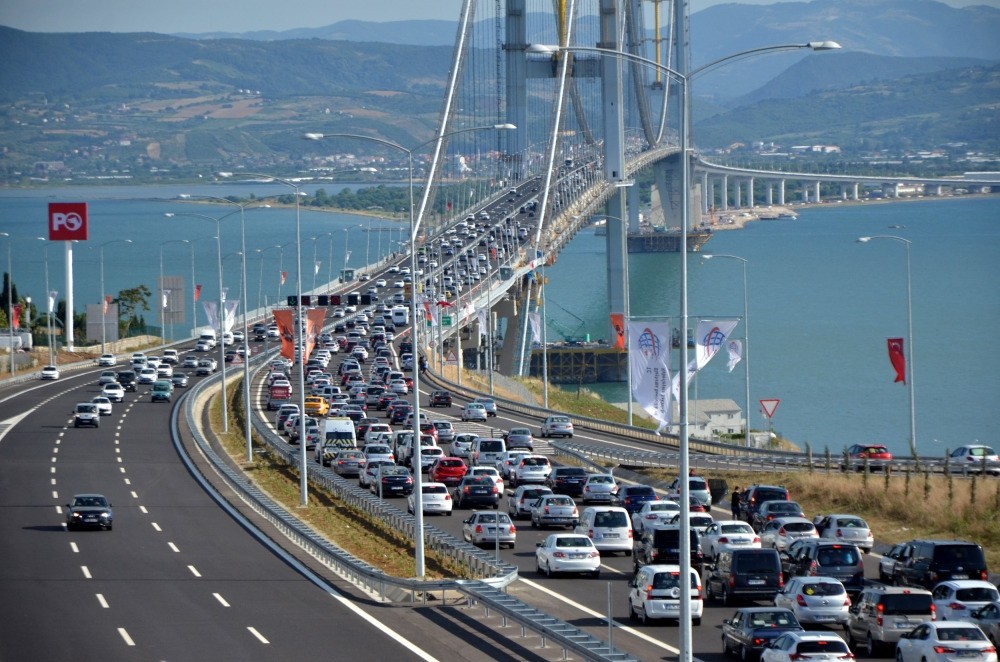 Thousands of motorists took to the bridge as they headed for their Bayram holidays. (AA Photo)
by Daily Sabah Jul 08, 2016 12:00 am

The Osman Gazi Bridge, a mega bridge that shortens travel times from the north to the west, has attracted more than 400,000 motorists since it opened last month, along with a good dose of selfie lovers braving fines to take a photo of the ambitious project in the northwest

It is just one of the dozens of projects the government has taken on in a bid to modernize transportation, but the Osman Gazi Bridge, spanning the Gulf of İzmit in northwestern Turkey, has fast become a landmark drawing thousands in a few days. Since its opening on July 1, 435,115 vehicles have passed over the bridge, Hasan Basri Güzeloğlu, governor of İzmit, announced. The bridge was toll-free throughout during the three-day Ramadan Bayram, or Eid al-Fitr, the holiday marking the end of the fasting month of Ramadan, and this might have helped the rise in traffic, but a news report painted a different picture. Drivers who will not pay the normal fee of TL 88 ($30), had to pay TL 92 for stopping their cars in the middle of the bridge just to take a selfie with the country's new landmark. Despite warnings, selfie-taking motorists and passengers blocked traffic and continued snapping photos.

The bridge, named after the founder of the Ottoman Empire, is the largest section of the Gebze-Orhangazi-İzmir highway project, which aims to shorten travel times from northwestern Turkey and the country's most populated city of Istanbul to western Turkey including İzmir, the third largest city in the country. The Osman Gazi Bridge is also the world's fourth longest suspension bridge with the largest central span.

Completed within a 39-month period, the Osman Gazi Bridge aims to decrease the over concentration of industrial operations in İzmit's Gebze and Dilovası districts. Travel time between Istanbul and İzmir will decrease to three-and-a-half hours from nine hours thanks to the project and the entire motorway project is scheduled to be finalized in 2018. The entire project's cost is estimated at $9 billion.

According to the World Bank's Private Participation in Infrastructure Database (PPI Project Database) published in June, Turkey's seven infrastructure projects, which cost $44.7 billion, made up 40 percent of global investments in 2015. In this respect, the Gebze-İzmir Motorway investment of $6.4 billion along with Istanbul's IGA Airport at $35.6 billion significantly contributed to Turkey's success.

The 433-kilometer-long motorway is expected to provide a direct connection from Istanbul and its surrounding provinces to the third and fourth largest cities in Turkey, Izmir and Bursa respectively. The motorway crosses through the bridge in İzmit, southeast of Istanbul.

The bridge reaches a height of 252 meters and the bridge deck is 25.93 meters long, with a main span length of 1,550 meters. Totaling 2,682 meters, the İzmit Bay Bridge has the fourth largest main span in the world.

The bridge is among the Justice and Development Party (AK Party) government's "crazy" projects that include a new waterway to rival the Bosporus in Istanbul and part of an infrastructure drive to modernize the country before 2023, the 100th anniversary of the Republic of Turkey. Another bridge, the Yavuz Sultan Bridge, which will be one of the world's widest bridges when completed, is scheduled to open in Istanbul in August. The Eurasia Tunnel Project that will connect Istanbul's Asian and European side with an underwater tunnel is also scheduled to be inaugurated by the end of 2016.
Last Update: Jul 08, 2016 2:01 am
RELATED TOPICS