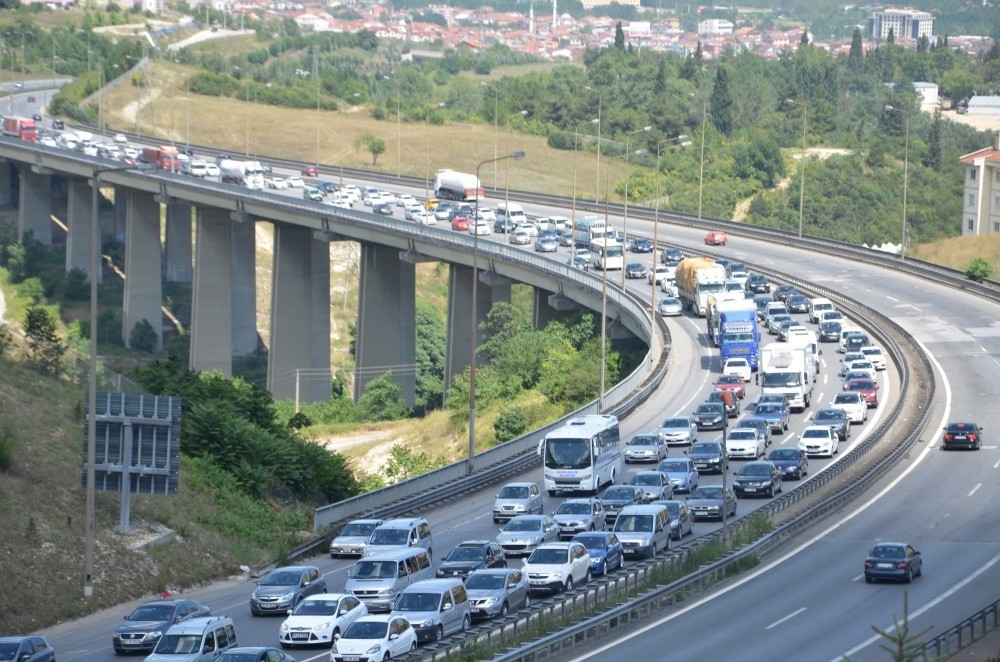 Holidaymakers formed long lines along TEM highway leading to Istanbul as they rushed to return home before the holiday's end. (IHA Photo)
by Daily Sabah Jul 09, 2016 12:00 am

Hundreds of thousands of people are returning home as the nine-day Ramadan holiday ends. Returnees are causing deadly accidents and frustrating traffic snarls on roads leading to big cities

Holidaymakers started returning home on Thursday from a lengthy holiday for Ramadan Bayram. The route from popular vacation resorts in the south and west to big cities has proven dreadful for motorists who find themselves stuck in heavy traffic. Despite slow-moving traffic, accidents continue to claim lives in Turkey, which is infamous for frequent road safety violations.

The holiday, a cheerful occasion when people visit relatives in distant cities or bask in the sun in vacation spots in the Aegean and Mediterranean coasts, means a potentially deadly journey for motorists. In only the first six days of the holiday, 98 people were killed in collisions.

With the government's decision to declare Monday and Friday off as well in addition to the three-day Ramadan Bayram from Tuesday to Thursday, many travelers set off on July 1 to get to their destinations.

As of Thursday, the last day of the holiday, 98 people lost their lives and 313 people were injured in traffic accidents on highways across the country. The biggest accident happened last Sunday when 26 people were killed and 72 were injured in one accident.

Nationwide holidays in Turkey are usually marred by a spike in the number of road deaths despite prominent warnings from authorities about the dangers of reckless driving. Last year, nearly 70 died on Turkey's roads during the Ramadan Bayram.

The holiday officially ends on Sunday, but many hit the road early attempting to avoid return traffic. Unfortunately for motorists, traffic jams also started early. On Thursday evening, the Trans-European Motorway (TEM) and D-100, two major highways traversing Turkey's north and northwest, had heavy traffic heading toward Istanbul. Traffic occasionally came to a standstill on roads that were largely empty after the original exodus for the holiday.

In Çanakkale, where the Dardanelles provides a shortcut to Istanbul from western cities, heavy traffic continued through Friday and is expected to continue until Sunday. Ferries were unable to keep scheduled travel times and extra ferries were deployed due to high demand while long lines of vehicles waiting to board ferries snaked through the city's streets, causing frustrating snarls for locals.

Experts warned drivers to be patient and attentive to avoid causing accidents. Statistics say most accidents occur during a trip's early hours or when travelers are nearing their destination.

Experts list a number of measures for drivers to avoid accidents and minimize the damage accidents inflict. Measures include wearing comfortable clothes, undertaking thorough maintenance of vehicles before traveling and avoiding carrying heavy suitcases in vehicles. Experts also urge motorists to take a 30-minute break every three hours while on long trips and warn against driving while drowsy.

Most accidents stem from speeding, with people rushing to make it to their destination as soon as possible to spend as long as possible on holiday.

Authorities took measures against traffic accidents, common during holiday travel. The National Police's traffic division worked continuously throughout the holiday while police officers from other units were authorized to inspect cars and motorists.
RELATED TOPICS