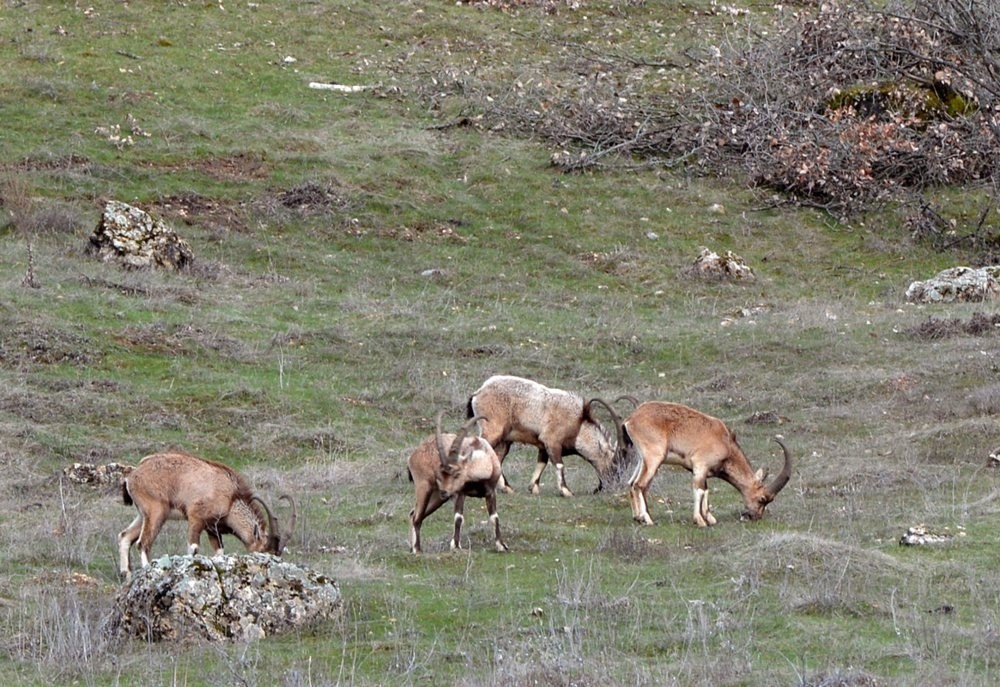 Wild goats, prevalent in central Turkey and in mountainous areas, are popular among foreign hunters.
by Daily Sabah Jul 11, 2016 12:00 am

Turkey's diverse wildlife attracts hunters from around the globe with hunting tourism filling the state's coffers with more than TL 14 million in the past five years, while the country also collected fines totaling TL 20 million from poachers

Hunting tourism draws as much controversy as it does revenue in Turkey. In five years, the country earned more than TL 14 million ($4.84 million) from foreigners who visited the country to hunt. In the same period, authorities issued fines totaling more than TL 20 million to hunters violating hunting bans.

Forestry and Water Affairs Minister Veysel Eroğlu briefed reporters on the state of hunting tourism in the country, which draws protests from animal rights activists.

The ministry occasionally launches sells licenses to hunt specific animals, to the chagrin of activists, claiming the hunting bids prevent wildlife preservation. Authorities defend that hunting does not endanger the species in question, and on the contrary, contributes to culling overpopulated species and preserving wildlife sustainability. Hunters pay as much as TL 10,000 to hunt a single brown bear. Every year, biddings are held separately in rural areas rich with wildlife, to hunt bears, deer, wild goats and boars.

Turkey is otherwise known for its efforts to preserve wildlife and is home to three biodiversity hotspots and a large variety of endemic species. Wildlife corridors, which will connect small wooded areas with big forests to provide easy access for wild animals to larger habitats, are in the works. The project in northern and northeastern Turkey will connect isolated wolves, brown bears, lynx, wildcats, roe deer and other wildlife populations in national parks. Ministry officials say Turkey's reforestation continues rapidly and will hopefully help minimize the conflict between humans and wild animals that have been forced to leave their natural habitats in search of food due to deforestation.

Authorities also stepped up the crackdown on those who violate hunting bans. Some 650 guards are deployed in areas popular with poachers. Eroğlu said they fined more than 32,000 people between 2011 and 2015 for violating bans and slapped them with fines totaling TL 20.4 million. The ministry also relies on nearly 700 volunteers to monitor hunting grounds to enforce bans.

A 2005 law to regulate hunting tourism helped to boost revenues and crackdown on poachers. The government changes the animals allowed to be hunted every year in line with wildlife censuses. Foreign hunters often arrange hunting trips with travel agencies authorized by the government and are allowed to bring their own shotguns. The ministry assigns its own personnel to every hunting trip to monitor whether hunters act in line with regulations not to exceed the hunting limits for every animal.

As a country situated on two continents, Turkey's rich biodiversity makes it a favorable place for hunters. The country's northern regions are known for large bear populations while wild goats are more common in central Anatolia.
RELATED TOPICS