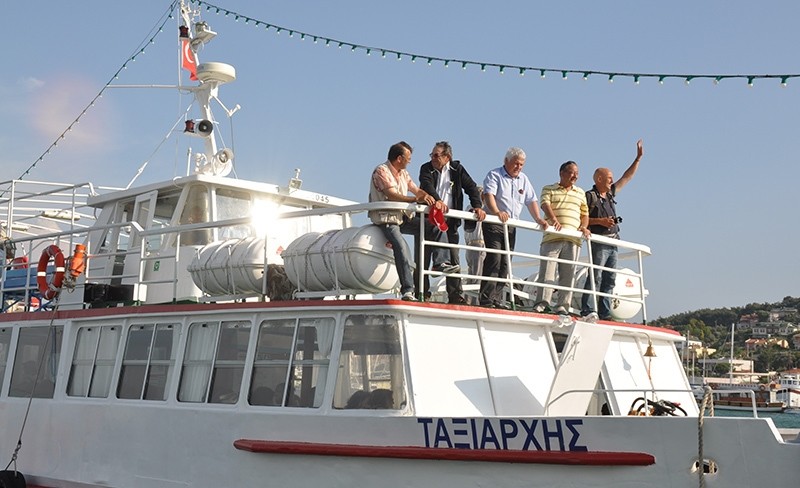 | IHA Photo
by Compiled from Wire Services Jul 15, 2016 12:00 am
Their states have been hostile to each other, but Turks and Greeks, save for the occasional argument on the origins of baklava, have mostly been on friendly terms recently. Encouraged by warmer relations between Ankara and Athens that evolved from the dogfight of fighter jets to an exchange of personal gifts between the two countries' leaders, a new ferry service has launched between the Greek island of Samos and İzmir on Turkey's Aegean coast.

Ferrys between Seferihisar and the Greek island of Samos is a landmark move as it is the first time Greeks can visit the district en masse when before it was Turkish tourists who swarmed the Greek islands for daily excursions. Although it is a bid mainly to ramp up tourism revenue for the Turkish district, closer relations between the two peoples are evident, with many tourists shopping on credit, a payment method local shopkeepers exclusively offer only to those in their neighborhood. Samos Governor Nikolas Katrakazo was among the first group of Greek citizens who boarded the ferry to Seferihisar to shop on credit. The governor bought a jar of tangerine jam and other tourists followed him. Local businesses are pleased with the boost in revenue from cash-strapped Greece. Tourists, most of them visiting the district for the first time despite the close proximity of the island, said they "liked it very much" and would stay longer next time instead of just going on daily excursions.

Seferihisar Mayor Tunç Soyer and Greek Consul-General in İzmir Argyro Papoulia were among those who welcomed the ferry passengers with flowers and drinks on Wednesday. Papoulia told reporters that it was a significant day "to unite the two peoples" and they hoped similar services will be available throughout the entire Aegean coastal strip of Turkey. "We are pleased with the cooperative efforts of the two countries in recent years and how better relations have been promoted," Papoulia said. She said that Turks' interest in Greece is also "swelling every year" and they issued visas for 7,000 people last month. "We received an incredibly high number of Turkish tourists as visitors to the islands. We are now aiming to convince them to stay longer and similarly, we want the islanders visiting [İzmir] to stay here more," she said. Tunç Soyer said the ferry services opened after six years of efforts to formally open a customs crossing between the two countries. "In tourism, you should host people living nearest to your country first. That was what we were supposed to do," he told reporters.
Last Update: Jul 15, 2016 9:07 am
RELATED TOPICS