Small Gülenist junta in military attempts to stage a coup in Turkey, situation under control 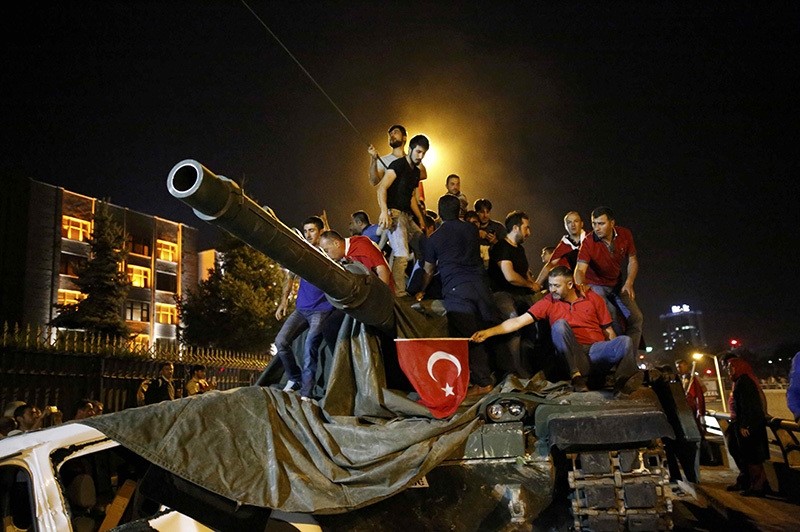 As a result of the attempted coup, 161 people were killed, including 41 police officers and 47 civilians, while 1.440 others were injured. Some 104 pro-coup figures were also killed.

Clashes between security forces and pro-coup units went into defensive in separate locations in Istanbul and Ankara which continued until Saturday morning.

Prime Minister Binali Yıldırım acknowledged late Friday that a group within Turkey's military was engaged in what appeared to be an attempted coup, as army units blocked entrances to Bosporus and Fatih Sultan Mehmet bridges connecting Istanbul's European and Asian sides, while military jets were flying over the capital Ankara.

Later on President Erdoğan and Prime Minister Yıldırım called on citizens to take to the streets for protests as more and more people flocked into the streets to stand up for democracy, leading to a country-wide resistance against the coup attempt. People got on tanks, disarmed coup soldiers and took back control at raided institutions.

"I invite our nation to squares. I have not seen a stronger force than the nation," President Erdoğan said on live TV shortly after the coup attempt started across the country.

"Those who attempted this madness will pay the heaviest price," Prime Minister Yıldırım said live on TV.

The Grand National Assembly of Turkey convened in an emergency session in which leaders of all four parties at parliament showed up to issue a joint statement against the coup.

The Nationalist Movement Party Chairman Devlet Bahçeli also strongly condemned the coup attempt, saying that it was not just a coup attempt, but a terrorist attack.

Parliament was also targeted overnight by aircraft operating under the control of the putschists while deputies and staff were inside. Several anti-coup protesters waiting outside the parliament and at least two parliament staff were injured.

The headquarters of the National Intelligence Organization (MİT) in Ankara was attacked by military helicopters and heavy machinegun fire during the attempted military coup overnight, wounding at least three people.

The head of the agency, Hakan Fidan, was at a secure location throughout the events and was in constant contact with Erdoğan and Prime Minister Binali Yıldırım.

The pro-coup troops also tried to occupy, and later surrounded the Presidential Complex located in Ankara's Beştepe district, however, reportedly prevented doing so as the Presidential Guard Regiment sealed off the premises. As of Saturday morning, F-16 jets dropped two bombs near the complex. Initial reports suggested that the bombs targeted anti-coup protesters near the complex and five people were injured, however; later reports stated that pro-coup armed vehicles were targeted by soldiers loyal to the government.

Pro-coup forces occupied the headquarters of state broadcaster TRT, and they forced several of its channels to broadcast a statement belonging to the "Peace at Home Committee," which is a reference to the republic's founder Mustafa Kemal Atatürk's famous quote "peace at home, peace in the world" despite the contradicting nature of Gülenists with republican values. The statement claimed that the army had taken control of the entire country and announced a curfew. The building was later rescued by police and civilian groups.

Helicopters and fighter jets under the control of the coup plotters also attacked the Police Special Forces Training Academy and national satellite company TURKSAT's compounds in the district of Gölbaşı. 17 police officers were killed at the academy, while two civilians at the TURKSAT compound were also killed.

The entrance to the Atatürk International Airport in Istanbul was closed while military tanks were deployed outside the airport. The airport was taken by police and civilian groups, who detained two generals and several soldiers at the scene.

Meanwhile, private broadcaster CNN TÜRK's studios were raided by the coup soldiers, but only lasted for a short period of time. After an operation by special task forces and the help of citizens, the studio was retaken from the coup soldiers.

Turkish Airlines stated that all operations at Atatürk Airport have returned back to normal and that flights are planned to resume by 06:00 a.m.