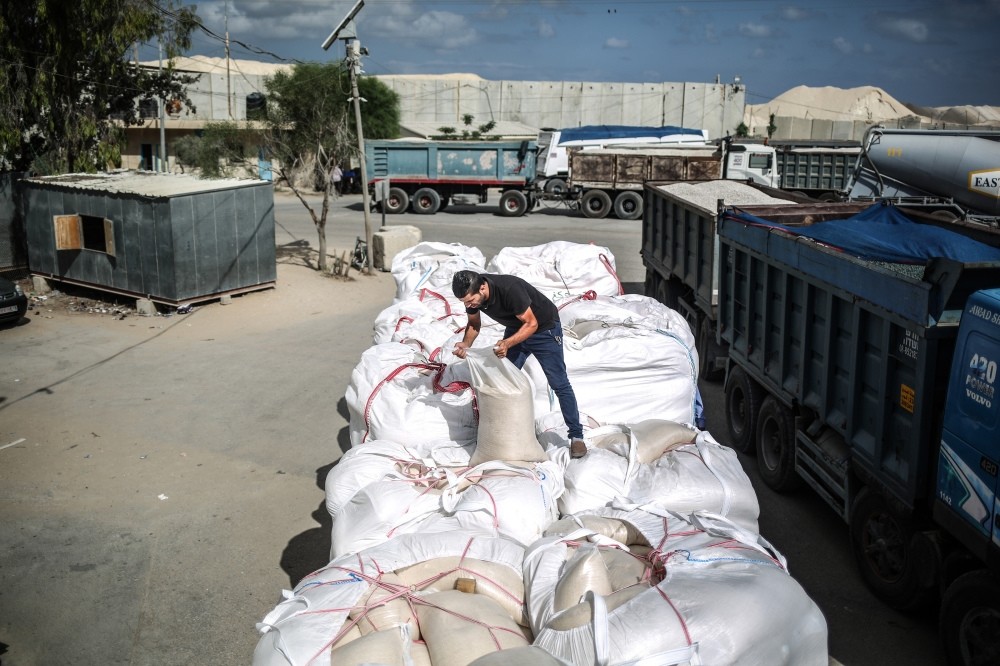 Trucks carrying aid gradually arrive in Gaza where a blockade restricted access to food and other vital goods.
by Compiled from Wire Services Jul 19, 2016 12:00 am
Gazans welcomed more humanitarian aid as 25 trucks full of supplies arrived yesterday in the city, which suffers from an Israeli blockade.

Trucks carrying the aid they offloaded from the Lady Leyla, a vessel that left Turkey's port of Mersin earlier this month, entered Gaza at the Karm Abu Salem crossing. Mounir al-Galban, the Palestinian official overseeing the crossing, told Anadolu Agency that the trucks were carrying food aid that included flour, sugar and rice, and that it would be stored in warehouses belonging to the Hamas-led government's Social Affairs Ministry prior to its delivery to needy families.

Yousef Ibrahim, undersecretary of the Social Affairs Ministry in the Gaza Strip, said 154 trucks carrying aid from Turkey have entered the city so far and they were planning to deliver the aid today. The Lady Leyla carried approximately 11 tons of humanitarian aid and arrived in the Israeli port of Ashdod on July 3, days after she left Mersin. The aid will be transferred by a total of 400 trucks to the Gaza Strip as part of the Turkish aid campaign.

The aid campaign comes courtesy a deal between Turkey and Israel that eased the blockade on the Gaza Strip. Turkey and Israel recently cemented a deal to restore their strained relations, and in dispatching the aid vessel, Turkey's first step after the deal was a show to make clear that it has not turned its back on Palestinians despite the normalization of relations with the Israelis.

Apart from delivering humanitarian aid, Turkey will carry out projects to rebuild Gaza and improve the lives of thousands who have suffered from Israel's attacks on Hamas. They include the construction of residential buildings and a 200-bed Turkish-Palestinian Friendship Hospital. The Turkish International Cooperation and Development Agency (TİKA) recently unveiled a $13 million project to build 320 housing units in the Gaza Strip for Palestinians whose houses were demolished in the 2014 Israeli military offensive.

Relations between Turkey and Israel had declined over the past few years as the Justice and Development Party (AK Party) government in Ankara became more vocal in its criticism of Israel's treatment of Palestinians. The final straw came in May 2010 when the Mavi Marmara, among six civilian vessels trying to break Israel's blockade of Gaza to deliver aid, was raided by Israeli commandos. Nine Turkish activists and one Turkish-American one were killed in the raid. Public outrage in Turkey led to massive protests against Israel and the suspension of diplomatic ties. Turkey formally asked Israel for an apology and compensation for the families of the victims and demanded the removal of the Gaza blockade as conditions to normalize relations. Although Israel was initially stubborn, it eventually accepted talks to restore ties. The talks culminated in a deal announced last month. Israel agreed to Turkey's humanitarian presence in Gaza and accepted that a payment of $20 million compensation would be made in to the families of the Mavi Marmara victims.
RELATED TOPICS