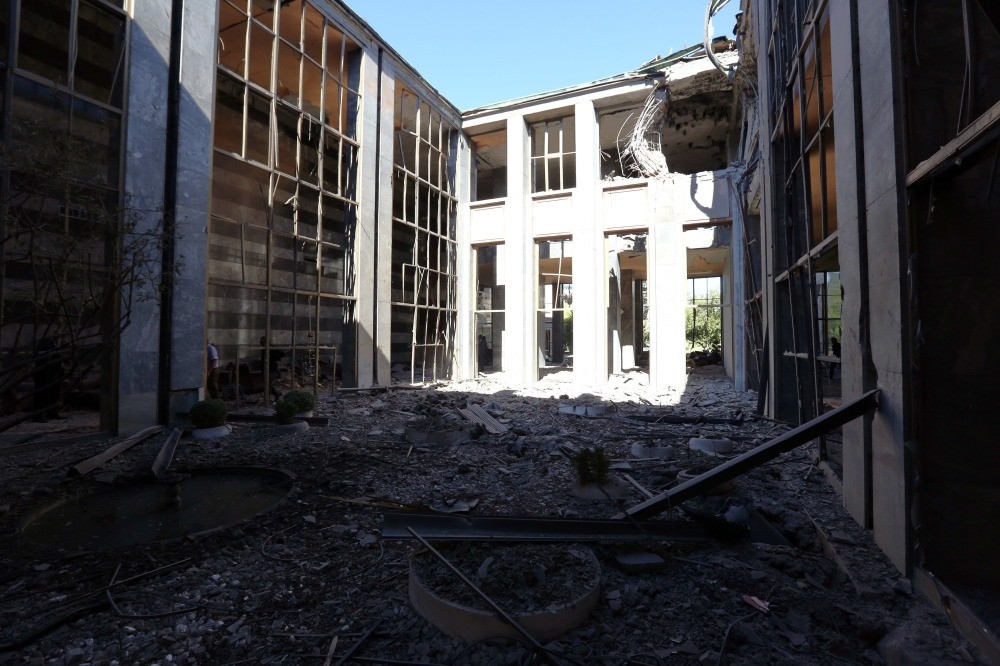 Parliament was heavily damaged by airstrikes during the coup by the Gu00fclenist junta.
by daily sabah Jul 20, 2016 12:00 am
The building that houses Parliament was bombed for the first time in its 55 years during the failed coup attempt on Friday night, July 15, by a junta linked to the Gülen Movement. A bombed-out section of the building will be converted into a "democracy museum" in a tribute to its survival despite the attempt to overthrow it.

Parliament Speaker İsmail Kahraman, who huddled with lawmakers in a shelter in the building, only to emerge with deputies from all parties to read a message of solidarity, said on Monday that Turkey should spread the culture of democracy. He said the Parliament building would not be fully restored, and the floor hit worst by multiple airstrikes will be converted into a museum. "Power belongs to the people and those rejecting it will have to accept it whether they like it or not."

After hearing the news regarding the attempted coup, Kahraman and numerous ministers and deputies from the Justice and Development Party (AK Party), Republican People's Party (CHP) and Nationalist Movement Party (MHP) spent the night at Parliament. Parliament was bombed seven times, which wounded several police officers and parliamentary officials. Kahraman led a parliamentary session during the coup attempt. "We are the representatives of the sovereign Turkish people and our unity tonight represents the unity of our people."

Along with the museum, Parliament is considering boosting security with an air defense system. Media outlets reported that large barriers will be installed in front of Parliament. None of Turkey's three Parliament buildings have seen any major security threat since the first was first established in 1920 during the War of Independence. Shuttle buses used to carry parliamentary staff were parked in front of the building on July 15, the night of the attempted coup, to prevent tanks entry. Additional security measures, including automatic rifles for police providing security at the building, are also under consideration. A new shelter will also be built for lawmakers to be used in emergencies.
RELATED TOPICS