The women of Turkey's anti-coup protests 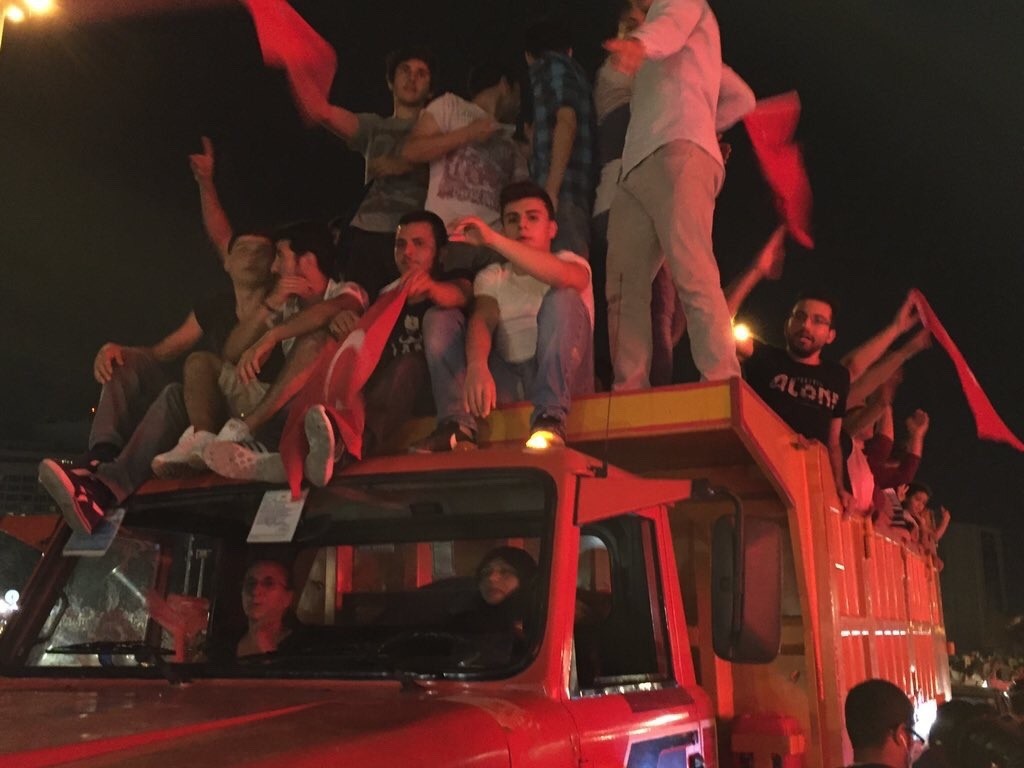 The public's fight for democracy on July 15 was an ample opportunity for photojournalists to capture the essence of the moment with people standing in front of tanks and confronting heavily armed soldiers making for striking images unprecedented in Turkey.

"I saw a photo of two ladies. One was wearing a chador. She was behind the wheel of a truck and next to her was a lady not wearing [Islamic clothing], and the truck was full of people. This photo made me cry. With this, our nation showed we are not divided [in the face of coup attempt]," Prime Minister Binali Yıldırım said at a press conference earlier this week.

Şerife Boz and Sema Tutar, two middle-aged women from Istanbul, were the people in that truck's cab. The 50-year-old Boz was heading to Taksim Square to join a democracy vigil with her neighbor Sema Tutar, 61. The photo was taken one day after the coup as tens of thousands of people took to the streets to rally against the coup attempt, but Boz was also behind the wheel of the truck to carry people to locations where they resisted the coup attempt on July 15.

"I noticed something strange was happening when I saw tanks on the streets on TV [on the coup attempt] night. When I heard President [Recep Tayyip] Erdoğan's call for people to take to the streets, I decided to go. I was on the Bosporus Bridge until the early hours of Saturday," Boz told Anadolu Agency, referring to the bridge taken over by coup plotters in the first minutes of the coup attempt. "I stayed there with others and we chanted 'God is great' repeatedly. I was there for the future of my country, my nation, my children," she said. Boz, whose family runs a transportation business, does not have a driving license required for trucks but she got behind the wheel when she could not find any other vehicle to go to the bridge. "I was emotional. It was like going to war for your country. I shouted slogans for hours. I recited prayers with others on the bridge," she said, recounting the coup attempt night. "Our state, our nation was spared big trouble when the coup attempt ended. May Allah grant strength to our leaders so that they will bring those plotting the coup to justice," she said.

Boz, a mother of four, says she confronted the soldiers and the police then detained the coup troops. "I was never afraid. My daughters told me not to go, but I did not listen. My husband told me I could not get the truck to Taksim Square, but I managed to get there," she said.

Sema Tutar was shocked and almost passed out when she saw tanks on the streets. "[Şerife] told me she would go, to stand against the [coup] soldiers. I decided to join her. This was an emotional moment. We were crying all the way. I was so glad when it was over," Tutar said. "We took to the streets so that our children, grandchildren, would live in a better country. I feel happier now," she told Anadolu Agency. Tutar does not wear hijab or chador like her neighbor Boz, but she says when it comes to a threat to the existence of the state, they are all united. "I don't care what others wear, and they don't care about what I wear. This is not about lifestyle or politics. We were there for our country. It was a matter of life and death for Turkey," she said.