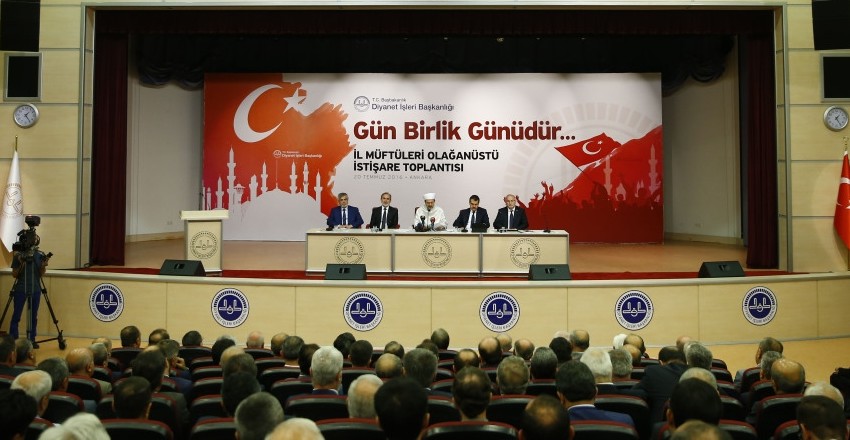 Muftis in Turkey issued a joint declaration on Wednesday to condemn the recent coup attempt. Clerics called for Muslims in Turkey to put aside differences and stand united against coup attempts, and denounced Gülenists, who have long defined themselves as religious people, as behind the coup

The coup attempt by a small junta within the Turkish Armed Forces (TSK) on July 15 rocked Turkey, which has seen three major coups in its history. Gülenists, a shady group that evolved from a simple religious movement into a terrorist organization, are considered responsible for the attempted coup, apparently carried out by infiltrators in the army. The Presidency of Religious Affairs (DİB), the country's highest religious authority, joined other government agencies in denouncing the coup attempt.

Muftis - high-ranking clerics appointed to every province by DİB, qualified to give religious rulings of permissibility or impermissibility, or "fatwa" - joined DİB President Professor Mehmet Görmez in capital Ankara for a joint declaration.

The declaration heaped praise on the "determination and courage" demonstrated by those people who acted to stop the coup actors, as well as efforts by the government, presidency, police, media and nongovernmental organizations in calling for resistance. The declaration said, "Our patriotic nation did not allow the violation of national will and rule of law. It put a stop to this treacherous attempt by uniting against it and sacrificing their lives."

Clerics said members of the Gülenist Terror Organization (FETÖ) - the official name for the Gülenist group involved in the coup attempt and other illegal activities - "have long exploited the naive religious sentiment of sincere followers of (the Islamic) faith and over time became a network of traitors under the guise of a religious movement, with the ambition of taking over the state." Reading the declaration, Mehmet Görmez said the public was agreed that FETÖ was behind the junta who attempted to stage the coup. "The dirty ambitions of this organization, which exploits people's faith and loyalty while hiding behind the guise of a religious movement, are now disclosed. The truth is that this group who presented themselves (to the Muslim faithful) as compassionate people were actually filled with hostility against others." Görmez said they should now ponder and analyze how Gülenists gained this reputation.

Görmez said that at the time of the coup attempt, the religious authority had "sided with the people," and DİB muadhdhins - who call the daily adhans - recited "sala" from minarets across the country to support the national spirit. Sela refers to a call to prayer which is normally recited only prior to funerals and the Friday communal prayers. Sala, to the surprise and joy of the Muslim faithful, echoed throughout the country on Friday night, followed by a message urging people to take to the streets to counter the coup attempt. Thousands took to the streets that night, despite the gunfire and airstrikes by the junta's troops which killed hundreds of civilians, and managed to stop the tanks and military vehicles which attempted to invade public buildings. "Those attacking our nation understood that the nation was resisting after people were united by the sala call," Görmez said, extolling the imams, muadhdhins and DİB staff across the country, as well as those who joined the "democracy watch" against the coup on the streets. He warned that although the coup had been foiled, the public should remain vigilant against "further plots to incite strife."

Görmez also vowed that the DİB would not allow any FETÖ infiltrators within their ranks. "Our members are responsible to act in line with principles shaped by Islam, our holy book the Quran and Sunnah of Prophet Muhammad." In a bid to purge Gülenists from the authority, some 492 DİB personnel, including three muftis, were dismissed on Tuesday.Görmez called for the public to remain alert against the "emergence of new gangs of terror and violence that would exploit a state of chaos and insecurity at times of such coup attempts." "It is time to put aside our differences in faith and opinion and stand united to protect the national will, rule of law, freedoms and democracy."
RELATED TOPICS