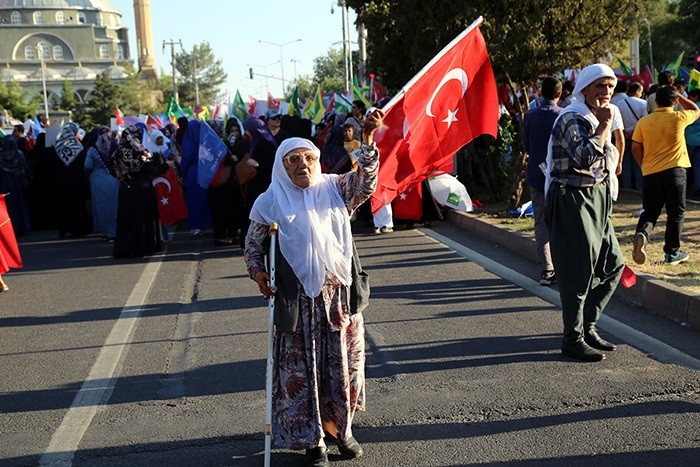 Amid the failed Gülenist coup attempt against Turkey's democratically elected government, millions across the country have been protesting since July 15, when a faction within the military drove tanks on people, bombed parliament and other places in Turkey from the air, killing 246 people and injuring over 1500.

While the protests were nation-wide, with millions on the streets, citizens in the mostly Kurdish-populated, terror-hit southeastern provinces also took their courage to the streets to stand against the coup attempt.

Thousands of protesters from all ages, attended demonstrations day and night, in Diyarbakır, Mardin, Şanlıurfa, Gaziantep, Batman, Hakkari, Van, and Ağrı provinces, from the first moment of the coup attempt.

"I am 74 years old. I have been here for three nights waiting here to protect the justice. Long live our leader Recep Tayyip Erdoğan. We are proud of you," a Kurdish woman's video was circulated on social media.

Meanwhile, in another video, hundreds were on the streets in the Cizre province, waving Turkish flags on the streets against the military coup attempt.