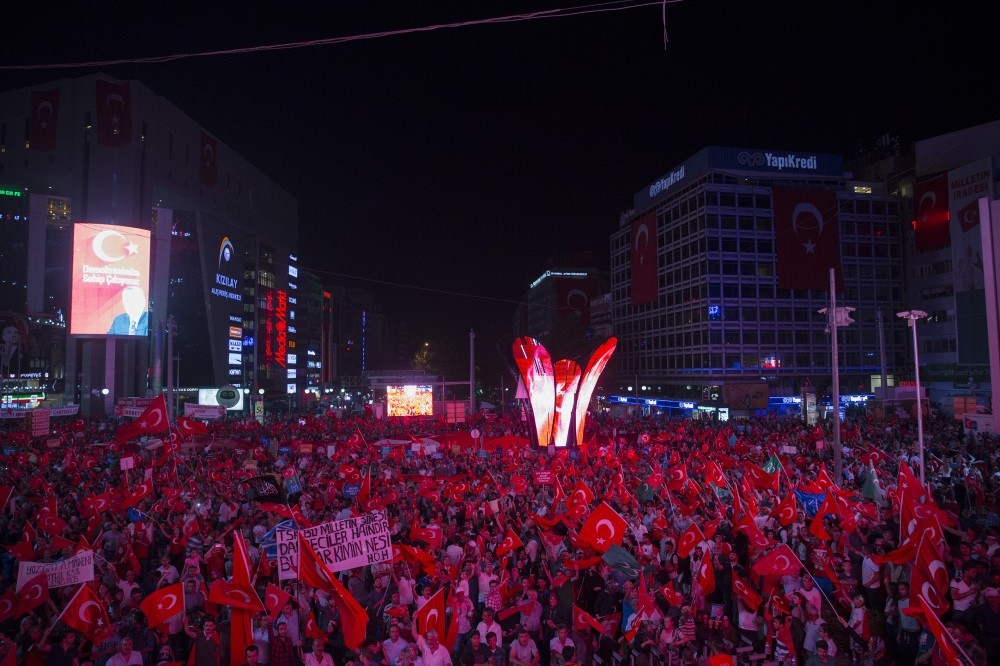 Squares and streets across Turkey remain crowded at night as the public retains its commitment to continuously rally for democracy, 12 days after foiling a coup by Gülenist junta

Since the country's leaders called on people to "take to the streets for democracy" on the night of a coup attempt on July 15, large crowds have filled streets and squares in what they called a "democracy watch" or "vigil." In every city and town, crowds waving Turkish flags attend rallies continuing until the early hours of the morning. Many sleep in makeshift tents or benches after the rallies and leave for work in the morning, an unprecedented event in Turkey's modern history.

The rallies were first called for by President Recep Tayyip Erdoğan and Prime Minister Binali Yıldırım. Both leaders urged people to go out and "claim the streets" when the news of a coup attempt by a Gülenist junta broke out, on a night where hundreds of civilians and security forces personnel were killed by coup soldiers.

For 11 days, people from all walks of life and every segment of the political spectrum spent the night in rallies sometimes attended by political leaders and celebrities. Patriotic songs, blared from loudspeakers, and mehter, the Ottoman military band, are present in almost every rally, where the coup attempt is condemned as an all-out attack on the country. Local administrations offer free food, water and basic amenities to those attending democracy rallies while Istanbul municipalities provide free transportation.

The rallies intend to showcase the unity of the nation against coups, and indeed, both ruling and opposition parties joined forces to stand against the attempt in a rare occasion on Sunday when a cross-party democracy rally was held at Istanbul's Taksim Square.

On Tuesday night, crowds were on the streets as usual, either honking horns and playing patriotic songs in convoys or chanting slogans in support of the state and denouncing Fethullah Gülen, the prime suspect in the coup attempt blamed on his Gülenist Terror Organization (FETÖ).

In the capital of Ankara where the Gülenist junta attacked Parliament, police headquarters and the presidential palace, Kızılay Square near the army's headquarters were filled to the brim as usual with a huge crowd on Tuesday night. Cabinet ministers and lawmakers addressed the crowd while Metin Doğan and Mustafa Özbey, two civilians hailed as heroes for their confrontation with coup soldiers, greeted the fervent crowd. Development Minister Lütfi Elvan told the crowd the government would wipe out "this network of traitors" in reference to Gülenists and repeated the government's call to the United States for the extradition of Gülen, who currently resides in Pennsylvania. Elvan said the public would continue democracy rallies "until the president calls on them to stop" and vowed that coup plotters and their accomplices would be punished.

In Istanbul, Taksim Square was at the heart of democracy rallies across the city. The crowd chanted, "We will resist against coups." Another central location for rallies is outside President Erdoğan's residence in Kısıklı, a district on the city's Asian side. Erdoğan first addressed the public there following the foiled coup attempt that forced him to cut short his vacation at a Mediterranean resort where a group of elite troops linked to coup plotters stormed the hotel he was staying at minutes after he left to assassinate him. Prominent actor Kenan İmirzalıoğlu addressed the crowd at Tuesday night's rally in Kısıklı along with a spate of actors and singers. İmirzalıoğlu heaped praise on police and ordinary citizens fighting against the coup troops. "You stayed strong when this treacherous attempt started and defended our country, our flag. May Allah bless our heroes, our martyrs for democracy," he said
Last Update: Jul 28, 2016 2:18 am
RELATED TOPICS