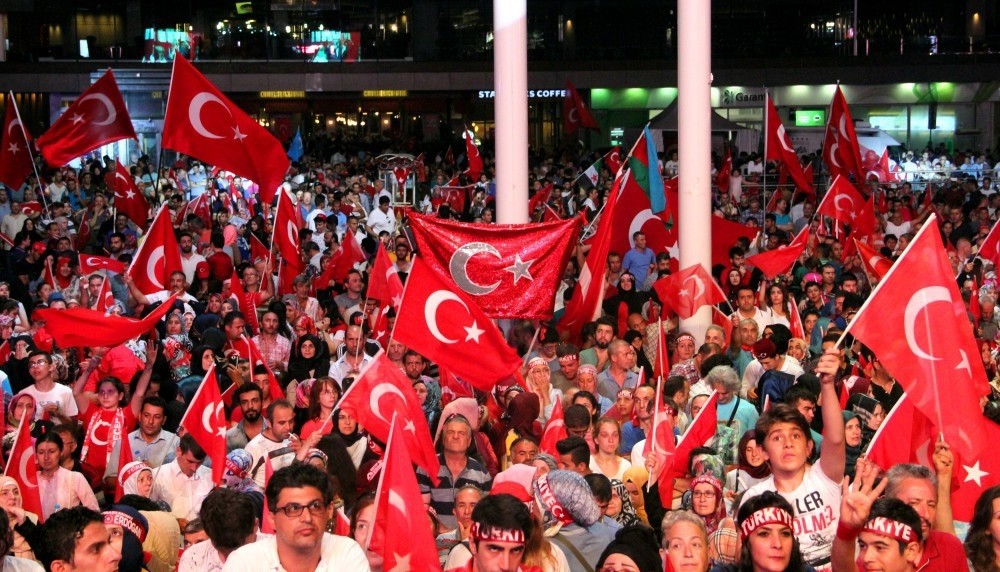 Public enthusiasm for democracy in a country shaken by two major coups in two decades shows no sign of dwindling as rallies, called for by Ankara following the July 15 Gülenist coup attempt, still draw huge crowds every evening

Pro-democracy rallies across Turkey entered their 15th day on Monday and although a new coup threat seems unlikely, the nightly conventions show no sign of a decreasing turnout.

The rallies called "democracy watches" were the result of calls by President Recep Tayyip Erdoğan and Prime Minister Binali Yıldırım, who appealed to the public "to claim the streets and squares," while a small Gülenist junta was attempting to take over the state on July 15 and when police and anti-coup soldiers were the only armed elements to counter the putsch attempt. The calls roused patriotic and pro-democracy sentiment in the public who proceeded to stand against the tanks and pro-coup soldiers, foiling the attempt by simply stopping tanks by standing in front of them, convincing soldiers to lay down arms or by wrestling the control of tanks. Hundreds were killed in the process when pro-coup soldiers opened fire on unarmed crowds blocking them from seizing control of the country. 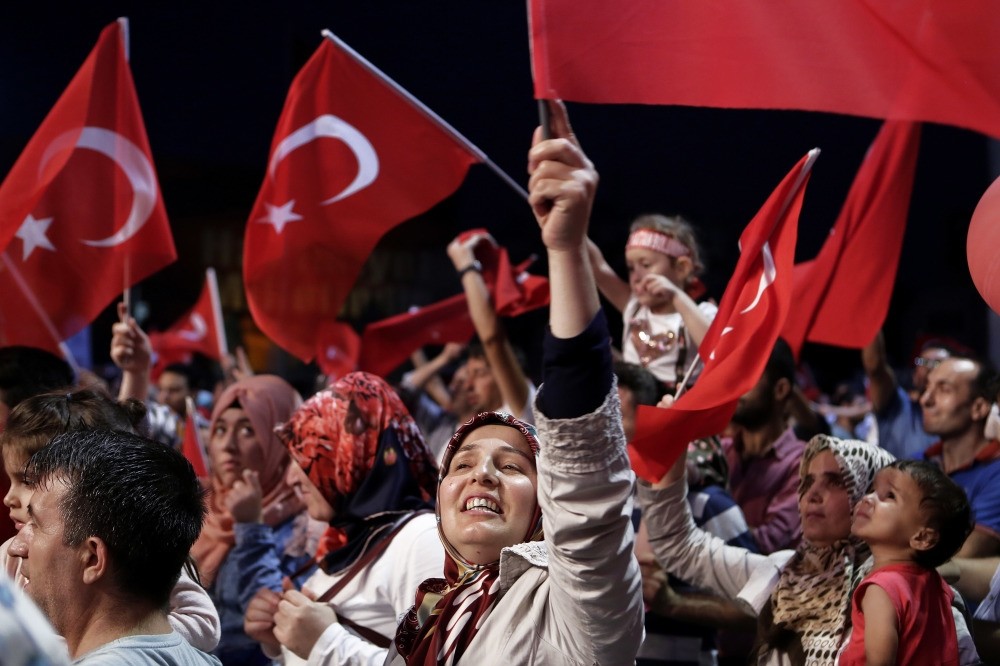 A crowd in Istanbul marks the 15th democracy rally since the July 15 coup attempt. The public rallied for democracy upon calls by the president and prime minister after the foiled Gülenist coup plot.

Every night, every major square in almost every city in the country has been filled with the crowds denouncing the coup attempt and displaying a show of force against possible future coup plots. Along with supporters of the ruling Justice and Development Party (AK Party), supporters of the opposition parties have joined the rallies.

They chant slogans in support of elected leaders and patriotic songs are played throughout the rallies attended by political leaders, celebrities and dignitaries. 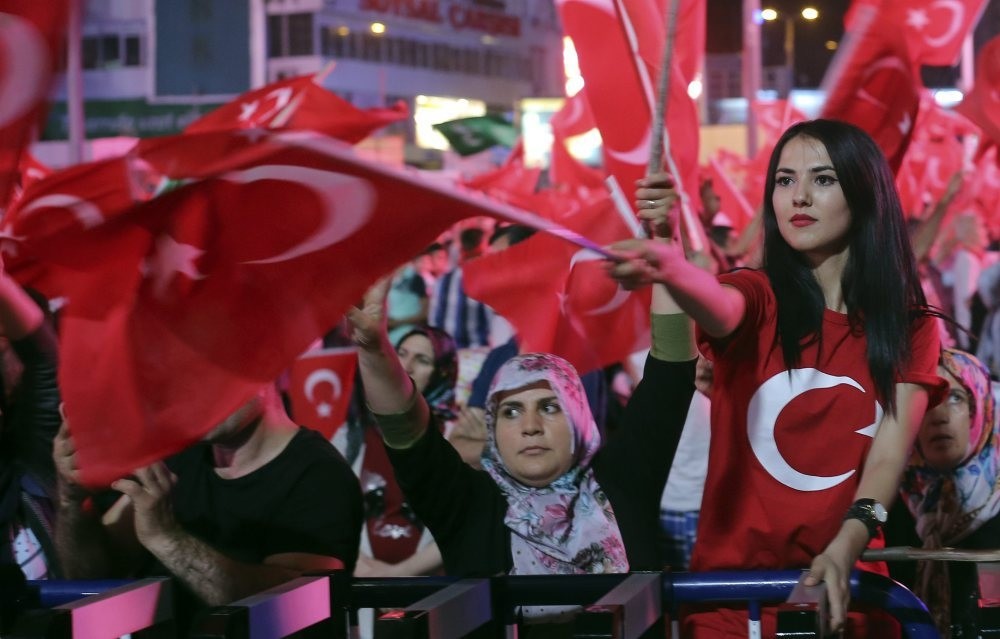 The rallies will be wrapped up by a grand convention at Istanbul's Yenikapı Square on Sunday and President Erdoğan and Prime Minister Yıldırım are expected to address a large crowd at that rally.

At Sunday night's rally in the capital Ankara where crowds gathered at Kızılay square, Parliamentary Speaker İsmail Kahraman made a speech and condemned "those who bombed their own Parliament" in reference to airstrikes that damaged the Turkish Grand National Assembly on the night of the coup. "Turkey has gone through an ordeal and will overcome it. We are sad that army weapons were turned against the people who built the army. The July 15 attempt is the work of terrorists disguised as soldiers," he said. 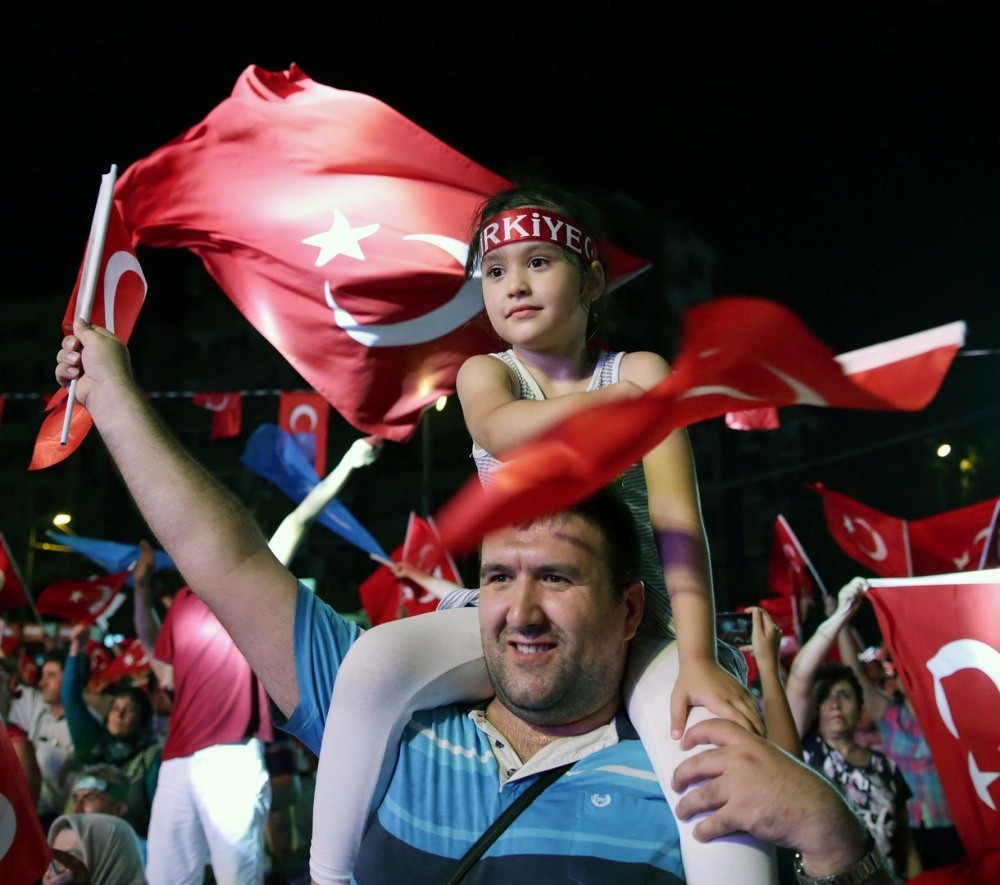 Justice Minister Bekir Bozdağ was at a "democracy watch" in the central city of Konya on Sunday night. Bozdağ spoke about Fethullah Gülen, leader of Gülenist Terror Organization (FETÖ), which is accused of being behind the coup, and his ministry's extradition request from the United States for Gülen.

"They would seize power and Gülen, like a conqueror, would come back to Turkey to impose a regime (the coup plotters) sought to install. We would have a wholly different Turkey controlled by (Gülenists). You, the people, did not just stop a coup but you also prevented your children from having a dark future," Bozdağ said. The minister vowed that coup plotters would receive the harshest sentences. He also said that they have asked U.S. officials for the detention of Gülen as a precaution to prevent his escape to another country. "We have intelligence that Gülen might flee to Australia, Mexico, South Africa, Egypt or Brazil. If he leaves for any of these countries, it means the United States will simply let him go because he wouldn't be able to do anything the United States did not allow. If the United States let him go, this will hurt us and means it openly harbors someone hostile to Turkey," he said.
RELATED TOPICS